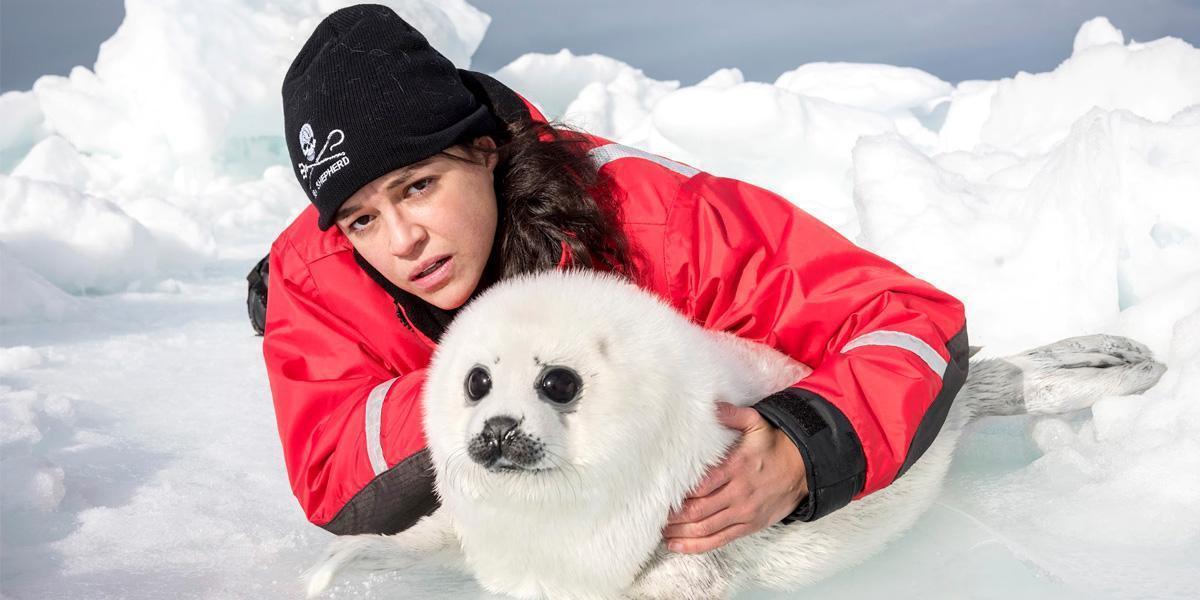 A Sea Shepherd team flew over the Gulf of St. Lawrence last week documenting an ecological disaster that very few people want to talk about—especially those in the Canadian government.

It has been 40 years to the month that French actress Brigitte Bardot first went to the ice floes in Canada to focus attention on the slaughter of baby seals at the behest of Sea Shepherd founder, Captain Paul Watson.

Since Captain Watson first founded Sea Shepherd 40 years ago in 1977, much has changed in the Gulf of St. Lawrence. Not all whitecoat seals are clubbed to death on the ice (shotguns are also permitted now), the kill quota is almost twice what it was then. Since 2011, the Canadian Department of Fisheries and Oceans has been allowing the slaughter of 400,000 seals they define as “adult” although many are no more than six weeks old.

Canadian seal products are banned in Europe and in the U.S. Regardless of the quota that has allowed sealers to kill 2.4 million seals over the last six years, only around 350,000 have actually been slaughtered in total because of a scarcity of markets.

However, there is one very significant change that the world needs to know.

Where is the Ice?

Harp seals cannot give birth to pups unless there is ice for them to be born upon. The team of Operation Ice Watch had trouble finding any substantial ice during its investigation.

Earlier in the week, the Operation Ice Watch crew found a couple of small patches along the coast of Cape Breton containing a few hundred seals and their pups. Two days later that patch was gone, broken up by high winds. It was found again two days later, more broken up and with fewer seals. Most likely the seal pups drowned.

There should be more than 200,000 seal pups in the Gulf yet no one seems to know where they are.

What the Operation Ice Watch team witnessed is something that Sea Shepherd has never witnessed before—a completely ice-free and seal-free Gulf. This alarming sight means that without ice, seal pups cannot be born. They are being birthed into the sea, only to drown or forced up on land where they have little chance of survival.

Despite the lack of ice, the Canadian government has issued a kill quota once again of 400,000 seals for the year 2017. This is an astounding figure when tens of thousands of seals may have already perished in the Gulf of St. Lawrence this year due for lack of ice.

Captain Watson and Sea Shepherd feel this should be declared a national emergency and a clear warning that climate change is accelerating faster than authorities anticipate.

Brigitte Bardot and Michelle Rodriguez: Posing With Seals Then and Now

Captain Paul Watson sent the all-female crew to the ice to commemorate the courage of Brigitte Bardot when she went to the ice in 1977 to focus international attention of the slaughter of seals. A photo of Bardot posting with a seal brought world attention to the cause and the need to protect harp seals. It became a pivotal point in the fight to stop this annual Canadian obscenity of cruelty and mass slaughter. 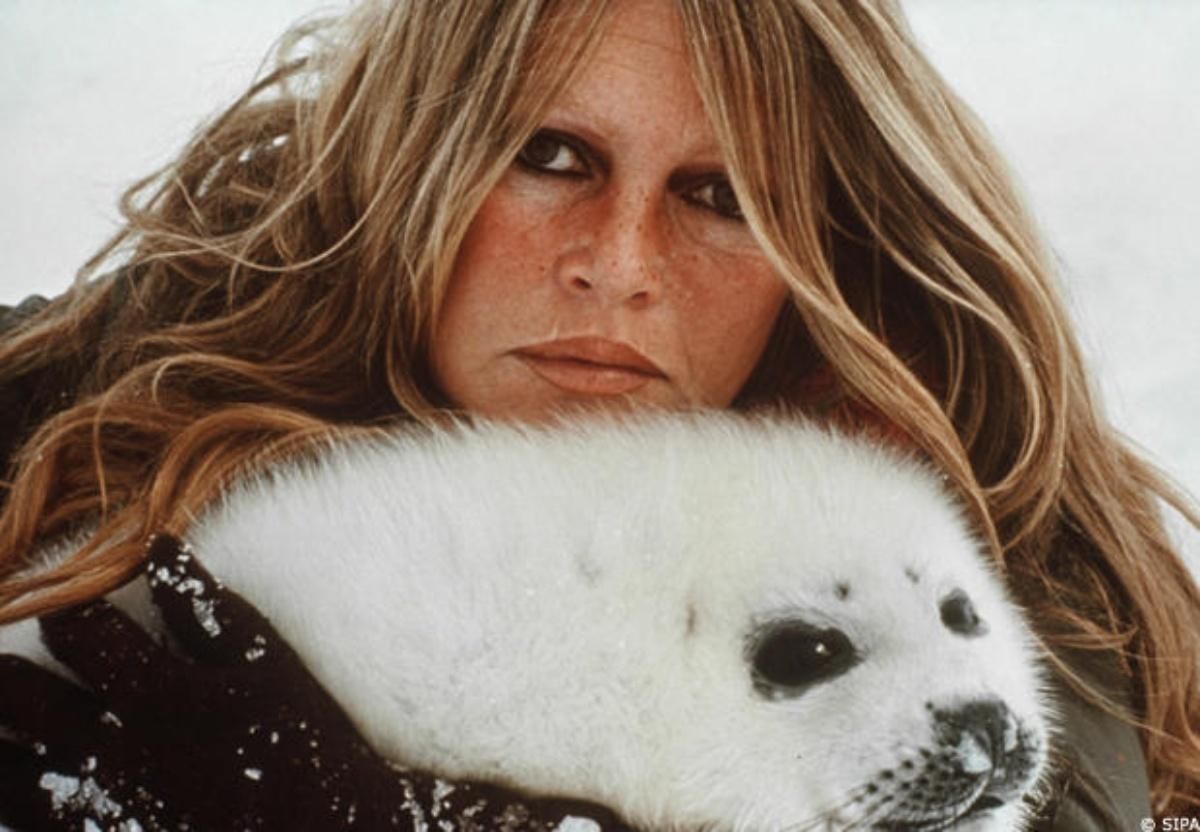 In recognition of Bardot’s famous picture, taken 40 years ago this March, Rodriguez posed with a whitecoat baby seal in her own 21st Century version of the iconic photo. 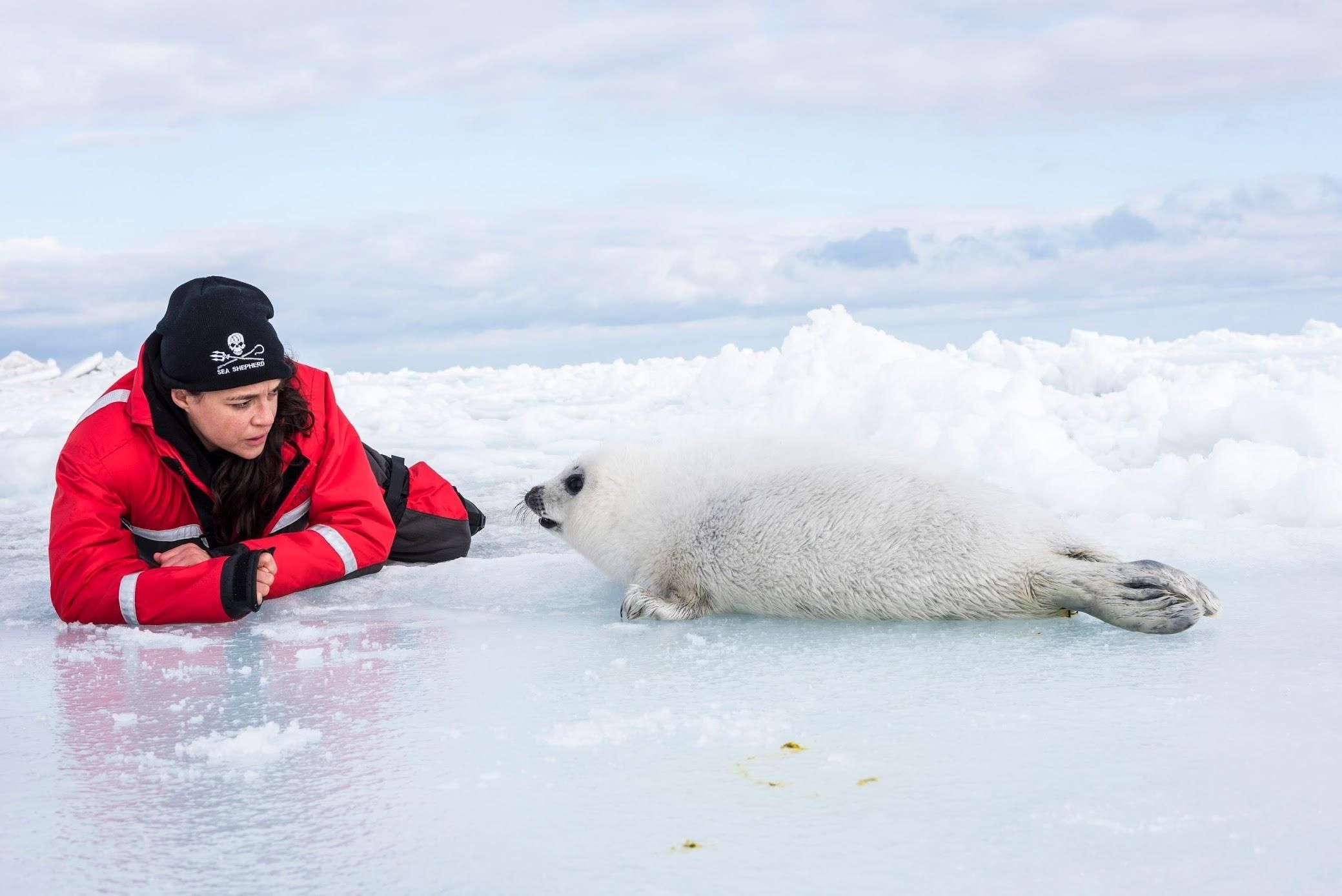 Michelle Rodriguez posed with a whitecoat baby seal in her own 21st Century version of the iconic photo.Sea Shepherd Conservation Society

“People listen to celebrities,” said Captain Watson. “Michelle has over 13 million friends on her Facebook page along with an international following. This helps to get the message out that now the seals are not just threatened by human hunting, but even more threatened by climate change and the loss of ice. Not content to kill the babies, mankind has now wiped out the nurseries.”

However, unlike the ice conditions of 1977 which made Bardot’s photoshoot a relatively safe one, it was not so easy to recreate the shot in 2017. The ice was so broken up and thin that Sea Shepherd’s helicopter could not land. Rodriguez, along with Yana Watson, Sidler and Lord had to hop from one small pan of ice to another just to reach the seals.

Despite the challenges, Rodriguez was thrilled to meet the seals on the small patch of ice.

“Seeing these beautiful creatures and understanding their place in the ecosystem, I’m saddened the Canadian government has been so short sighted in failing to prevent a massive ecological catastrophe,” said Rodriguez. “It’s sad to know the truth and watch the world turn a blind eye.”