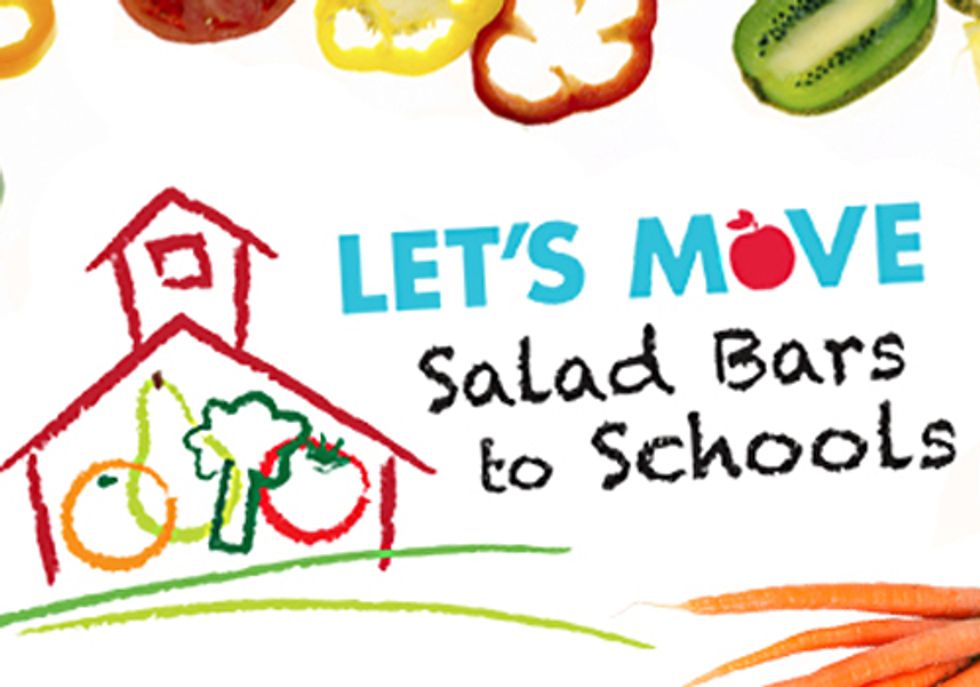 The United Fresh Produce Association Foundation says it’s “proud to be a Founding Partner of the Let’s Move Salad Bars to Schools Initiative.” I thought the First Lady should know this trade group is responsible for killing a vital produce testing program that helps keep kids safe from infection.

I am writing out of deep concern over Let’s Move’s partnerships with the United Fresh Produce Association and the Produce Marketing Association. These two groups have lobbied to kill a vital pathogen testing program. While the Let’s Move Salad Bars to Schools program is to be applauded, its association with these trade groups is not.

You may be unaware of a small produce testing program tucked away at the U.S. Department of Agriculture (USDA) called the Microbiological Data Program (MDP). At a cost of only $4.5 million a year, it’s one of the most efficient and successful uses of taxpayer dollars; and yet, it’s been zeroed out of the 2013 budget. Here is how Food Safety News recently described it:

This “tiny” program was launched in 2001 simply to collect data about fresh produce contamination, but it now regularly sparks produce recalls when participating state labs find pathogens. Perhaps more importantly, the labs upload any positive test results to the Centers for Disease Control’s PulseNet, which helps public health officials link foodborne illness cases to food products. MDP is also the only federal program that tests for non-O157 E. coli strains like the one that caused the deadly, high profile sprout outbreak in Germany last year.

While industry argues that the Food and Drug Administration (FDA) is better suited to the task than USDA, Food Safety News found that leaving the job up to FDA will mean an 80 percent reduction in produce testing. This translates to potential lives being lost. Again, from Food Safety News:

So why am I telling you all this? Because, as I described in February (based on an Associated Press story), the produce industry is behind the effort to kill MDP. According to the Associated Press:

Industry leaders from United Fresh Produce Association and other major trade associations have repeatedly pushed the government in recent years to get rid of the comprehensive testing program, saying it has cost growers millions in produce recalls and unfairly targeted farmers who aren’t responsible for contaminating the food.

Yes, those pesky recalls of contaminated food that can kill and ruin lives. Mrs, Obama, the produce industry is quite simply putting profits ahead of people.

The Chicago Tribune has also reported how the produce lobby wants to kill MDP. According to United Fresh representative David Gombas, over time the testing program “got twisted and it turned into a regulatory program where they were finding contamination and turning it over to the FDA and causing recalls.”

Moreover, in this document outlining the United Fresh Produce Association’s 2012 lobbying agenda, the trade group clearly states its desire to put the final nail in the MDP coffin: “Now that Congress has zeroed out funding for the Microbiological Data Program (MDP), it will be necessary to ensure that USDA sunsets the program and that protocols shift to FDA.”

If all that isn’t enough damning evidence, this disclosure form filed by a lobbying firm (The Russell Group) for United Fresh lists MDP funding in the 2012 Agriculture Appropriations Act as one of the issues the firm lobbied upon late last year. (It wasn’t to save the program.)

While it would be nice if FDA took up the slack, all signs are that it won’t, due to inadequate funding. As the Washington Post reported this week, neither President Obama nor Congress have put the program into the budget or any agriculture spending bills.

Mrs. Obama, I hope you are aware that with their still-developing immune systems, children are especially vulnerable to inflections from foodborne illness. I am sure your desire to get children to eat more fresh produce isn’t just about good nutrition. Don’t you also care that the produce children eat is free of life-threatening bacteria such as E. coli and salmonella? Of course you do. That’s why I am pleading with you to use your connections to the leaders of the fresh produce lobby to demand an explanation for why they are killing this program, and in the process, putting our kids at risk.

Many others are also calling on the federal government to save the program. For example, The New York Times editorial board called MDP “A Tiny Food Program that Matters," explaining:

There is too much at stake. Last fall, for instance, an outbreak of listeria in cantaloupe killed 30 people. Raw alfalfa sprouts, spinach, lettuce and tomatoes have sickened consumers in recent years. Keeping food safe requires consistent monitoring by the federal government. Ending this small program would harm those efforts.

Spinach, lettuce, tomatoes, sprouts, the good stuff school salad bars are made of, and all high-risk produce for potential contamination. Parents shouldn’t have to worry that the salad bars being put into their children’s schools by Let’s Move are tainted with deadly bacteria. Don’t you agree? Wouldn’t it be nice if the funders of Let’s Move Salad Bars to Schools did too?

Please do whatever you can to help save this vital program. Thank you.