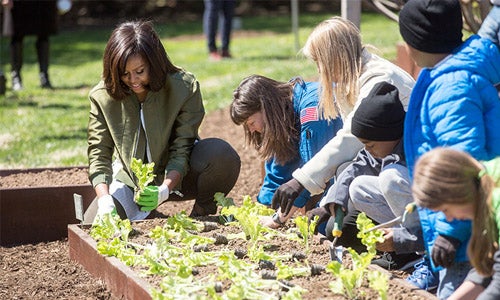 Michelle Obama helped to turn the dirt and plant seedlings on the South Lawn of the White House for the last time as first lady on Tuesday. She planted, among other crops, the same kind of lettuce grown on the International Space Station.

Over the two terms of the Obama administration, online videos of the first lady asking “Turnip for what?” or surprising school kids in their own garden classrooms have become familiar sights. So much so that it’s easy to forget that the kitchen garden, established by her in 2009, was the first to be planted on the White House grounds since Eleanor Roosevelt’s World War II–era Victory Garden. 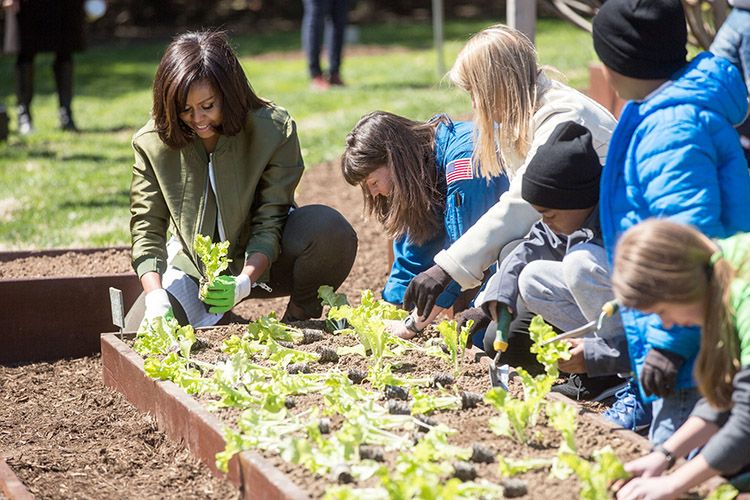 “It was eight years ago that we cooked up this really interesting idea, that maybe we could dig up some dirt of the South Lawn—maybe someone would let us do that and we could plant a wonderful garden that would be a space where we could talk about the food we eat,” the first lady said before working with elementary-school students from Washington, DC, schools and kids visiting from around the country.

The Let’s Move! campaign, focused on children’s health and diet, has had its ups and downs over the years, but initiatives like the White House garden have helped to change the conversation about kids’ diets—and has helped to further popularize the growing trend of school gardens across the country.

And the idea that kids will be more likely to eat their vegetables if they see where they come from, which Obama reiterated on Tuesday, is borne out by the research: Numerous studies have shown an increase in the number of fruit and vegetable servings consumed daily, as well as greater intake of fiber and vitamins A and C, after being involved in a school gardening program. Additionally, a 2013 study published in the Review of Educational Research showed “overwhelmingly that garden-based learning had a positive impact on students’ grades, knowledge, attitudes and behavior.”

Many of the students helping with the planting this year—who travelled from Newark, New Jersey and New Orleans and other points across the county—come from backgrounds where the need for both better nutrition and education outcomes is most acute. At the two DC public schools that have helped both plant and harvest the garden since 2008, Bancroft Elementary and Tubman Elementary, 76 percent and 99 percent of students are eligible for free or reduced-price lunch, respectively. Bancroft is 74 percent Hispanic, while Tubman is 48 percent black and 48 percent Hispanic.

Childhood obesity rates are higher for both black and Hispanic populations than for white kids. Furthermore, food-access issues in urban areas disproportionately affect poor and minority populations, with predominantly black neighborhoods suffering from the most limited access to supermarkets, according a 2013 study published in the journal Preventative Medicine—even when those neigbhorhoods are comparatively well off. 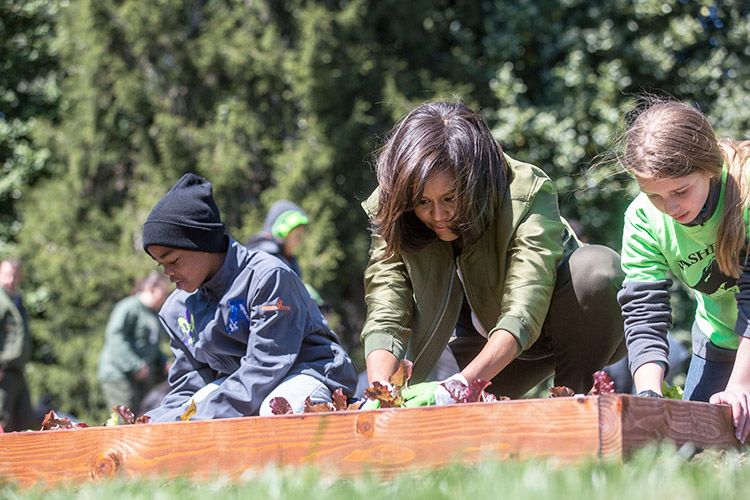 Even the rural schools invited to the White House this spring show a focus on food access and nutrition for minority students. In addition to a school from largely white Washburn, Wisconsin—population, 2,117—kids from Cortez, Colorado, were on hand as well. According to a White House press release, Cortez’s Kemper Elementary “serves several Native American tribal communities along with a strong Hispanic community and students of families that were some of the first settlers in the area.” In addition to school programs like Kemper’s Montezuma School to Farm Project, Native tribes across the U.S. are turning to their ancestral crops and centuries-old traditions of farming to help address the epidemic levels of diet-related diseases found in many reservation communities.

Whatever happens come November, a new president and first lady (or first husband) will be looking out over the South Lawn when planting time comes around next spring. And Obama would like the next administration to make a garden part of its early life in the White House, just as she did.

“This is my baby,” she said. “And hopefully this will not be the last planting—hopefully there will be other administrations who come in and take up this project and continue to make this a part of the White House tradition.”