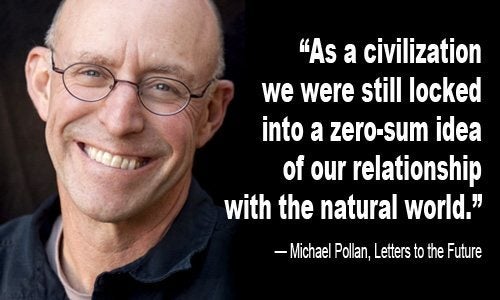 This letter to the future by Michael Pollan is part of the Letters to the Future campaign, a national effort to encourage people from all walks of life to write six generations into the future about climate change. The campaign puts a spotlight on the importance of world leaders agreeing to a global climate treaty at COP21 in Paris. Now it’s your turn to write a letter to the future.

I know you will not read this note until the turn of the century, but I want to explain what things were like back in 2015, before we figured out how to roll back climate change. As a civilization we were still locked into a zero-sum idea of our relationship with the natural world, in which we assumed that for us to get whatever we needed, whether it was food or energy or entertainment, nature had to be diminished. But that was never necessarily the case.

In our time, the U.S. Department of Agriculture still handed out subsidies to farmers for every bushel of corn or wheat or rice they could grow. This promoted a form of agriculture that was extremely productive and extremely destructive—of the climate, among other things.

Approximately one-third of the carbon then in the atmosphere had formerly been sequestered in soils in the form of organic matter, but since we began plowing and deforesting, we’d been releasing huge quantities of this carbon into the atmosphere. At that time, the food system as a whole—that includes agriculture, food processing, and food transportation—contributed somewhere between 20-30 percent of the greenhouse gases produced by civilization—more than any other sector except energy. Fertilizer was always one of the biggest culprits for two reasons: it’s made from fossil fuels, and when you spread it on fields and it gets wet, it turns into nitrous oxide, which is a much more potent greenhouse gas than carbon dioxide. Slowly, we convinced the policy makers to instead give subsidies to farmers for every increment of carbon they sequestered in the soil. 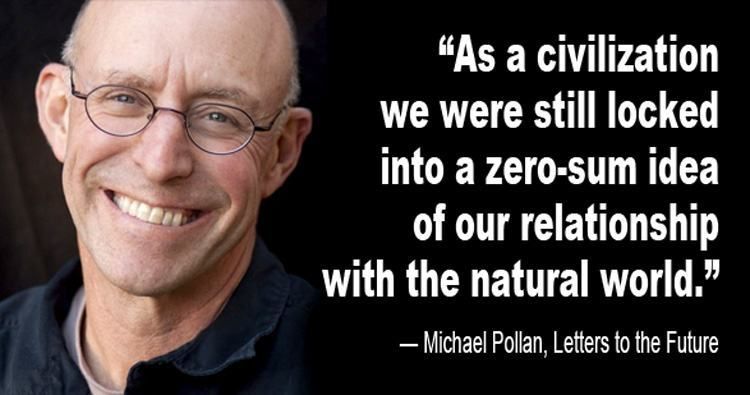 Over time, we began to organize our agriculture so that it could heal the planet, feed us and tackle climate change. This began with shifting our food system from its reliance on oil, which is the central fact of industrial agriculture (not just machinery, but pesticides and fertilizers are all oil-based technologies), back to a reliance on solar energy: photosynthesis.

Carbon farming was one of the most hopeful things going on at that time in climate change research. We discovered that plants secrete sugars into the soil to feed the microbes they depend on, in the process putting carbon into the soil. This process of sequestering carbon at the same time improved the fertility and water-holding capacity of the soil. We began to relying on the sun—on photosynthesis—rather than on fossil fuels to feed ourselves. We learned that there are non-zero-sum ways we could feed ourselves AND heal the earth. That was just one of the big changes we made toward the sustainable food system you are lucky enough to take for granted.

Adapted from an interview in Vice Magazine.

An American public intellectual, Michael Pollan is a teacher, author and speaker on topics that include the environment, agriculture, the food industry, society and nutrition.