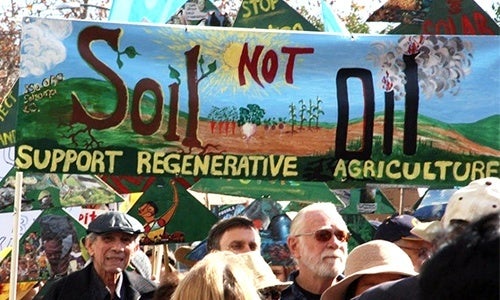 As the climate talks in Paris concluded, climate activists took note: soil restoration is our ally in the fight against global warming. It is inexpensive, effective and easy to implement, and it yields multiple benefits. Besides capturing carbon and reversing desertification caused by severe drought, soil restoration enhances regional cooling, strengthens resilience against droughts and floods, and improves food quality. It is a necessary second front in our battle against the heating up of Earth’s atmosphere.

How so? Soil holds carbon—lots of it. Other than the oceans and fossil fuel deposits, soils are the largest reservoirs of carbon on the planet, holding approximately two times the amount in the atmosphere and vegetation combined. The dark color of fertile soil comes from the presence of organic carbon compounds.

Unfortunately, over the centuries, a great deal of carbon has been released from soils through both primitive and modern agriculture. The Intergovernmental Panel on Climate Change recognizes that reducing emissions alone will not stop global warming. Disruptions, it says, are “irreversible” unless there is a “large net removal of CO2 from the atmosphere over a sustained period.”

The good news is that what has been lost can be returned. The excess atmospheric carbon creating anxiety would be far more content in cozy soil. Photosynthesis is how it will get there, through the process whereby plants convert carbon in the air into organic molecules exuded by roots to feed hungry microbes underground.

Ohio State University Scientist Rattan Lal referred to soil restoration as “low hanging fruit” and says it can serve as a “bridge” to climate safety during the transition to a non-fossil fuel economy. In a 2014 white paper, the Rodale Institute showed that regenerative organic farming could capture carbon dioxide in quantities exceeding global emissions.

Indeed, soils are the only suitable reservoir for the excess carbon in the atmosphere.

Politicians are also taking note. France’s Minister of Agriculture Stéphane Le Foll has introduced a program, 4 per 1000, calling for a yearly increase of 0.4 percent in the amount of organic matter in the world’s agricultural soils. Scientific Director for the Environment of the French National Institute for Agronomical Research Jean-François Soussana claims this modest increase in soil carbon globally would be sufficient to offset global greenhouse gas emissions. Depending on how quickly the agricultural community responds, the atmospheric level of CO2 could be kept from rising to levels uniformly viewed as disastrous. At last count, 25 countries, including Australia and the U.K., have announced their commitment to this campaign.

We can have our conservation and eat it too: https://t.co/CzUko7TkIS #4pour1000 #agroecology #permaculture pic.twitter.com/CClWnxHSIy

Michael Pollan, author of New York Times best seller, The Omnivore’s Dilemma, calls on his faithful to heed this message. In a powerful new video, Soil Solutions to Climate Problems, he says, “When soil is damaged, it releases carbon dioxide into the atmosphere and this has had serious consequences for the climate.” He then offers the “good news: we now know how to put carbon back in the soil where it belongs … What had been atmospheric carbon, a problem, becomes soil carbon, a solution.”

Michael Pollan is right. Soil is a fix, but not just for climate. Restoring soil also ameliorates desertification, a factor that can destabilize already volatile regions. Consider the unprecedented drought—perhaps exacerbated by global warming—that precipitated civil unrest in Syria before the outbreak of civil war there.

We need look no further than the ground beneath our feet in our quest for a more verdant, peaceful world. Let’s embrace this convenient truth.