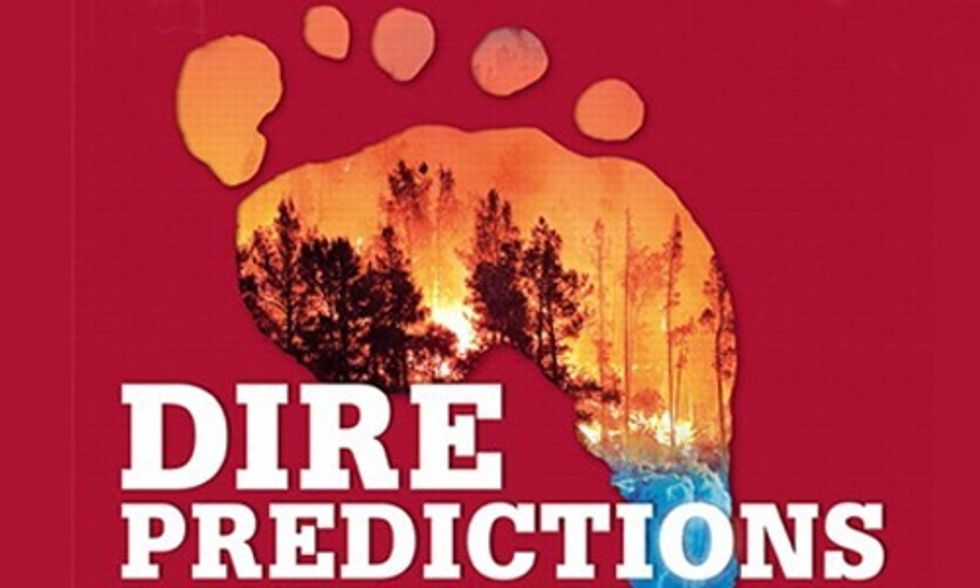 If you find it difficult to fully grasp the concept of climate change, you're not alone. But, thanks to esteemed climate scientists Michael E. Mann and Lee R. Kump at Pennsylvania State University, understanding the reality of climate change has never been easier.

Mann and Kump's new book, Dire Predictions, expands upon the essential findings of the Intergovernmental Panel on Climate Change's (IPCC) 5th assessment—which evaluates the risk of climate change brought on by humans—in a visually stunning and extremely powerful way. If you've always wanted to better understand the data behind climate change and be able to share this information with your family and friends, this illustrated guide is for you.

I had the chance to interview Mann, the director of the Earth System Science Center at Pennsylvania State University, last week about his book and here's what he had to say:

Q. Your book provides difficult to understand information in a very digestible way. What was your biggest challenge in boiling down the IPCC data in a clear-cut way?

A. Yes indeed. As a scientist who does research on this topic, it is always a challenge to look that at the data, graphs and projections, not as I would as a practicing climate scientist, but as someone who is not familiar with the topic, does not have a technical background and is seeing this stuff for perhaps the first time. Fortunately, I have a lot of experience in doing that now because of the time I spent on public outreach more generally. This book is a joint venture of both Pearson (a traditional academic publisher) and DK (who specialize in picture/photo-driven guides and books), and the supporting cast at Pearson and DK really helped us digest the information and bring it alive in the form of vibrant graphics that come out of the page, and supporting prose pitched at the right level for our audience.

Q. When contemplating the reality of climate change, one can get very depressed. Just the fact, as presented in your book, that "Basic principles of physics and chemistry dictate that Earth will warm as concentrations of atmospheric greenhouse gases increase" is a huge indication that we're in serious trouble. What would you like to share with EcoWatch readers to provide hope?

A. Yes, there is a fine line between urgency and pessimism. We do try to communicate as clearly as possible both the serious nature of the problem and the urgency of taking action, while stressing that real solutions exist, now. There is no reason we can’t solve this problem, and there are reasons for optimism.

There are signs of real progress today. Both the executive branch (through the U.S. Environmental Protection Agency) and groups of states are enacting policies to lower our carbon emissions, and on the international stage, the world’s two largest emitters of carbon, the U.S. and China, have entered into an historic agreement to lower carbon emissions. There is indeed quite a bit of reason for cautious optimism, going into the Paris summit later this year, that we will see meaningful progress this year. We’ve provided a considerably expanded discussion of the history of international policy agreements on climate change in the book this time, to make sure that readers have a sense of where we stand today in terms of this historical context. Among other things, we provide examples (e.g. acid rain, ozone depletion) where international cooperation has indeed led to solving global environmental problems in the past. There is no reason this time has to be any different.

Q. What role do individuals play in reducing carbon emissions? Is the role of the individual enough? Or is the role of government policy the critical piece to mitigating climate change?

A. Certainly, each person can make a difference. By taking actions to reduce our energy consumption, we can each save money, be healthier and reduce our carbon footprint. But to make the sorts of reductions in carbon emissions that we need to make to avert ever more dangerous warming of the planet, we must incentivize a transition away from reliance on fossil fuels for energy. In the absence of any congressional leadership on this issue, we must turn to other avenues for progress. That includes executive actions like those taken by current administration in the form of the U.S. EPA’s Clean Power Plan to reduce carbon emissions from coal fired power plants and higher fuel efficiency standards for vehicles. It also includes efforts by the states, including the New England states, and the west coast consortium of California, Oregon and Washington, to introduce carbon emissions reduction plans. And finally, it includes a bold new plan by majors of major cities, including LA, Houston and Philadelphia, to reduce carbon emissions in the country's largest cities.

Q. You hit on geoengineering in the book. People ask me all the time about this and I direct them to an article by Dr. David Suzuki, which I think takes a common-sense approach to the topic. What is your take?

A. Yes, well David is a personal hero of mine. I remember watching him early on in my scientific career and saying to myself, "I hope that someday I can be anywhere near the science communicator that he is.” David, unsurprisingly, hits the nail on the head (and his take is similar to what we say in the book). Geoengineering is to often these days used as a crutch for not doing the hard but necessary work of solving this problem the safe way, i.e. reducing our carbon emissions.

Q. If you could control the outcome of the climate talks in Paris, what would the final agreement look like?

A. Hah—some of my critics, ironically, do seem to think I have that sort of power. Alas, I do not. But nonetheless, I would insist, first and foremost, that the discussions accept as a starting point what the science has to say, i.e. that climate change is real, caused by human activity and already a threat. There are still some heads of state who deny the overwhelming scientific evidence, and who use that denial as an excuse for bad faith negotiation. In order to obtain an agreement with teeth in it—an agreement that really has the potential to lead to the substantial necessary reductions in carbon emissions—we must have good faith participation from all parties. We must accept that the problem exists and that the time to solve it is now. I would urge other heads of state to take, as a template, the historic agreement for substantial reductions in carbon emissions already reached last year by the world’s two largest emitters—China and the U.S. It provides a blueprint for what a global agreement that takes account the needs and interest of both developing and industrial nations would look like.

Q. What are the top three takeaways you want readers to get from your book?

A. 1. Climate change is real, caused by human activity and already a threat.

2. The threat will get much worse if we don’t act on the problem.

3. Solutions to the problem are available NOW in the form of renewable energy and policies to incentivize a shift away from fossil fuel energy. There is no excuse for further delays in action.