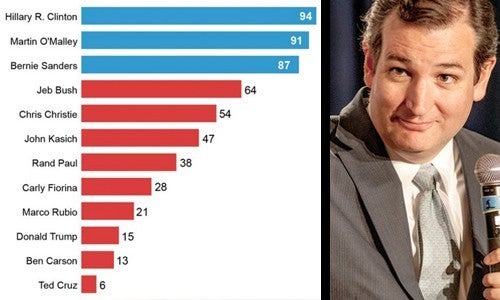 The Associated Press (AP) asked eight climate and biological scientists to grade (on a 0-100 scale) the comments of top presidential candidates for their scientific accuracy. To eliminate bias, the names of the candidates were removed from their comments, so the scientists were scrutinizing them merely on scientific grounds. The three Democratic candidates scored highly: Hillary Clinton (94 percent), Martin O’Malley (91 percent) and Bernie Sanders (87 percent).

https://twitter.com/AP_Interactive/status/669154209682612224 than the average kindergartner,” Penn State University professor Michael Mann wrote after reading Cruz’s statements before the candidates’ identities were revealed. “That sort of ignorance would be dangerous in a doorman, let alone a president.”

Cruz scored so lowly for his repeated denial of man-made global warming, even going so far as to argue that there has not been any warming, natural or man-made. In August, Cruz told an interviewer, “If you look at satellite data for the last 18 years, there’s been zero warming. … The satellite says it ain’t happening.” He tried to argue the same thing with Sierra Club President Aaron Mair in a Senate hearing last month.

Cruz has argued against “global warming alarmists” that climate change is “not science, it’s religion.” Last week at a Texas Public Policy Foundation energy event, Cruz said Obama’s climate plan was “the sort of power grab that our founders would have recognized as tyranny.”

The scientists who graded Cruz’s comments took issue with his claims. “Florida State University’s James Elsner said ground data show every decade has been warmer than the last since the middle of the 20th century and satellite data-based observations ‘show continued warming over the past several decades,'” reports the AP. “In fact, federal ground-based data, which scientists said is more reliable than satellites, show that 15 of the 17 years after 1997 have been warmer than 1997 and 2015 is on track to top 2014 as the warmest year on record.”

Another notable and vocal denier of basic climate science is Donald Trump. “It could be warming and it’s going to start to cool at some point,” Trump said in a September radio interview. “And you know in the 1920s people talked about global cooling. I don’t know if you know that or not. They thought the Earth was cooling. Now it’s global warming. Actually, we’ve had times where the weather wasn’t working out so they changed it to extreme weather and they have all different names, you know, so that it fits the bill.”

McCarthy, a former president of the American Association for the Advancement of Science, called Trump’s comments “nonsense,” while Emmanuel Vincent, a climate scientist at the University of California, Merced, said, “the candidate does not appear to have any commitment to accuracy.”

But clearly, the two candidates hold appeal among conservative voters. A Quinnipiac University poll released today shows that Trump is the Republican presidential front-runner in the early-voting state of Iowa, “with 25 percent support among GOP voters likely to participate in Iowa’s February 1 caucuses,” reported CNN. And Cruz (who has eclipsed Carson) is right behind Trump with 23 percent support—double the backing he had just four weeks ago.