Michael Brune: The Power Is in the Plan 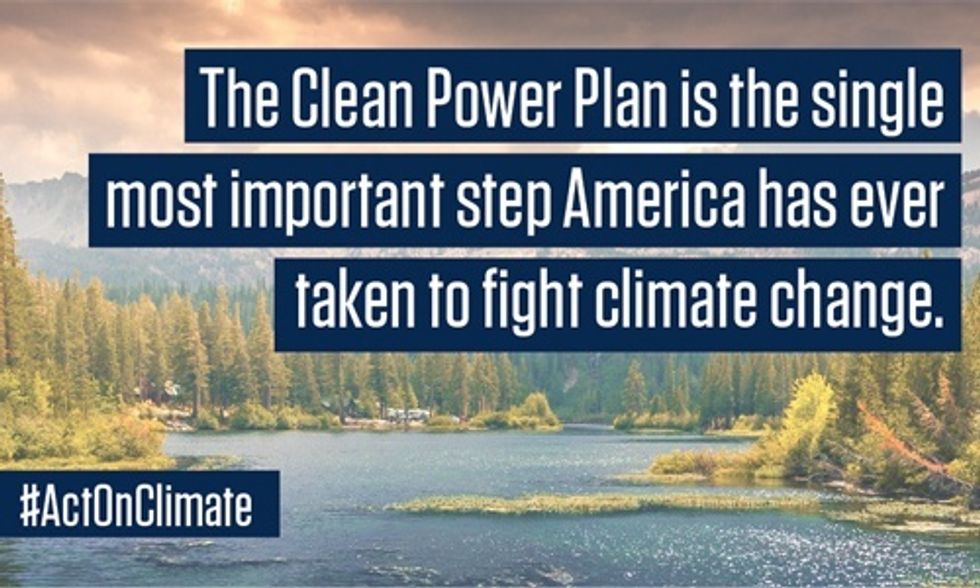 For anyone who cares about stopping climate disruption, yesterday was a big deal. Most of the news we read and watch about climate change is dark. Bleak, even. Depressing. Many of the tweets, posts and stories we see reveal the consequences of government and corporate leaders' inaction on climate—in the form of more intense wildfires, droughts, extreme weather and more.

But there's another story that rarely gets told. Our movement is growing. It is becoming more diverse and more powerful. Clean energy is becoming cheaper every month and is displacing dirty fuels at an increasing rate. All of this momentum is creating a positive feedback loop: As we become more effective at advocating for clean energy, the costs of solar, wind and energy storage are all plummeting. As clean energy gets cheaper, it becomes easier and easier to put fossil fuels in our rearview mirror.

Yesterday's announcement by President Obama gives our movement a shot in the arm. The U.S. Environmental Protection Agency (EPA) has at last issued its Clean Power Plan in final form. Until now, power plants faced no real limitation on how much carbon pollution they dumped into our atmosphere. For an administration with many significant climate achievements, this is the crown jewel.

The journey to get here started years ago, in the dark days of the Bush administration. Twelve states, three cities and an array of environmental groups (including the Sierra Club) brought suit to force the administrator of the EPA to regulate carbon dioxide, methane and other greenhouse gases as pollutants under the Clean Air Act. Eventually, on April 2, 2007, the Supreme Court, in a 5-4 decision, reversed an earlier judgement and found for the plaintiffs.

Now we reap the rewards of that legal victory. If the Clean Power Plan plays out as the EPA expects it to, the net reduction in greenhouse gas emissions from U.S. power plants by 2030 will be 30 percent or more below 2005 levels—a big step toward meeting our current international climate commitments.

The genius of the Clean Power Plan is that there really is no single plan. Instead the EPA has set individual goals for each state (except Vermont, which has no power plants that qualify for regulation; no wonder my friend Bill McKibben lives there). Each goal is calibrated for what that state can reasonably achieve in reductions through measures like retiring coal power, increasing energy efficiency and encouraging the growth of renewable energy. Yet it's up to each state to determine how it actually will achieve its goal; the EPA will remain hands off unless the state does nothing at all.

To be honest, the EPA has been conservative in putting this plan together. Each state is being asked to reach an attainable goal that is not just possible, but surpassable—and every state will end up in a better place than where it started. Our economy will benefit and so will workers—provided that the federal government and the states ensure that training and funding mechanisms are in place to support workers and communities that previously depended on fossil fuels.

Important as it is, though, the Clean Power Plan is only a first step in the race to stop climate pollution from power plants. This plan, by itself, does not solve climate change. It doesn't even reach the potential for carbon savings in the electric sector—we will meet and exceed this goal.

But there's a saying among marathon runners that nothing affects your average speed like zero miles per hour. The Clean Power Plan officially gets this country moving on the path to a carbon-free economy; we can and almost certainly will pick up the pace later. In fact, polls consistently show that, across party lines, Americans strongly support cutting carbon pollution from power plants. And a just-released poll from NextGen Climate of voters in presidential election swing states found that 70 percent of voters had a favorable reaction to a goal of at least 50 percent clean energy by 2030.

And while cutting carbon emissions is definitely great news for our climate, it also has profound benefits for our health, the environment and consumers. The EPA estimates that by 2030, electricity costs under the Clean Power Plan will drop by 8 percent, owing to the greater efficiency of renewable energy. What's more, creating this more-efficient system for power generation has the potential to create thousands of new jobs in construction, manufacturing and other sectors.

Meanwhile, the cleaner air that results from reducing our use of dirty fuels will save thousands of lives and enable millions of Americans to lead healthier, longer lives. Many of the people who will be helped the most are the ones who need it most. Power plants that emit carbon pollution and other toxic pollutants disproportionately harm nearby low-income communities and communities of color.

The real beauty of this plan is that it enables us to achieve all of these things simply by committing to do what we already know is achievable to reduce carbon pollution. That may not be the ultimate solution to climate disruption, but it certainly is a sensible place to start.

6 Governors Who Refuse to Comply With Obama's Clean Power Plan