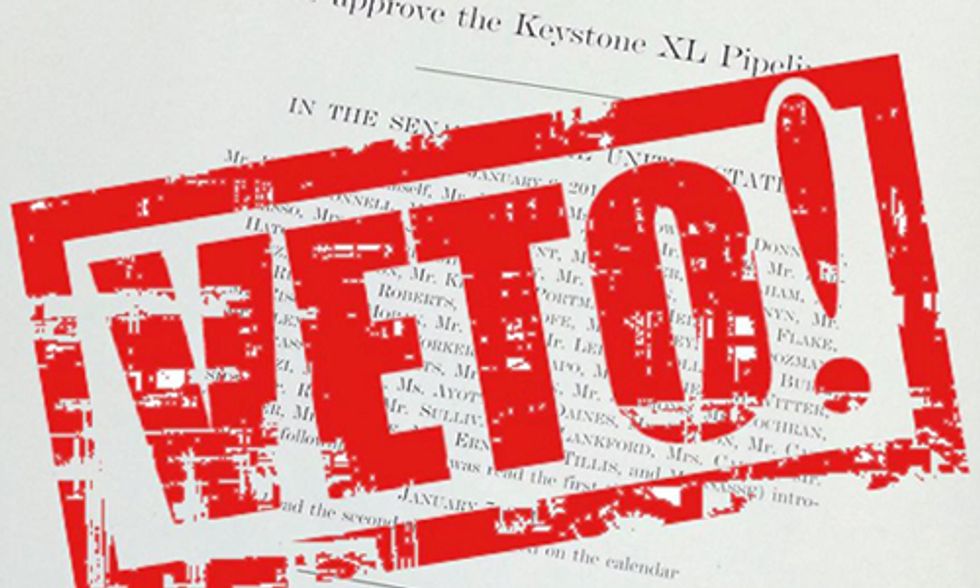 Surprising nobody, President Obama has quietly followed through on his promise to veto the bill from Congress that would have authorized construction of the Keystone XL pipeline. It's only the third veto of his presidency, and it means the way is now clear for the president to make a final decision about whether Keystone XL, and the toxic tar-sands oil it would pump across America's heartland, are in the national interest.

Why did Congress force the president to waste perfectly good ink reasserting his authority to make this decision? Certainly not because they were looking out for the best interests of the American people, who would be accepting all of the many risks associated with Keystone without seeing any appreciable benefits. The more people learn about the project, the more they think it's a bad idea. A poll just released by the League of Conservation Voters found that after hearing arguments both for and against the pipeline, a majority of voters believe President Obama should reject it.

What's more, nearly two-in-three voters (63 percent) say that if President Obama decides the Keystone XL pipeline is not in the nation's best interests, then Congress should accept the decision and move on to other issues facing the country, rather than trying to force the administration to issue a permit.

Seems like good advice. Yet tar-sands supporters in Congress will find it hard to tune out the fossil fuel interests that want to see Canada's oil sands mined to the utmost. After all, the biggest foreign lease holder in Canada's oil sands is none other than the Koch brothers. And they didn't become among the wealthiest people on the planet by taking "no" for an answer graciously.

But we'll cross that bridge when we come to it. For now, it's up to President Obama to do the right thing—for America, for Americans and for our planet.