Michael Brune: Bombs in Our Backyards 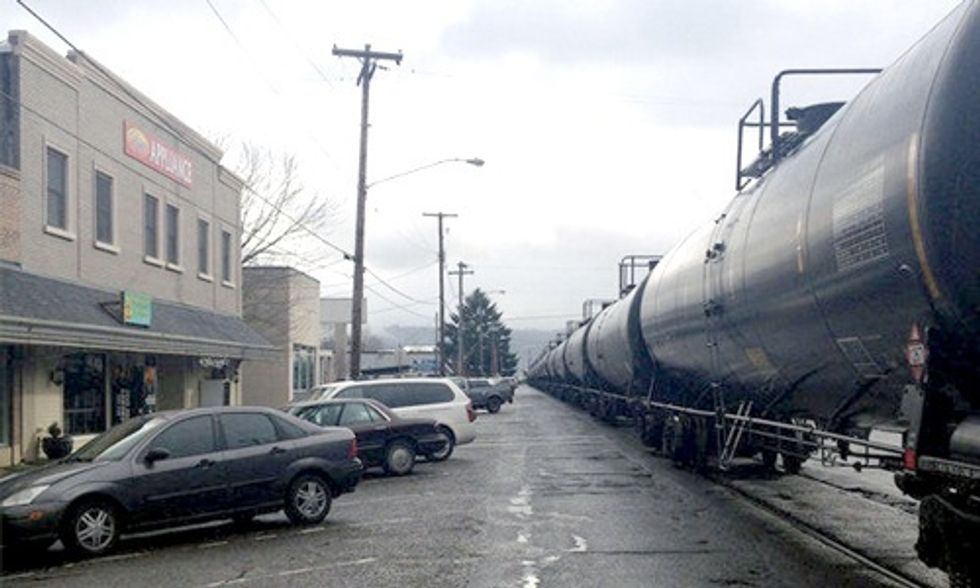 The hospitals prepared for an influx of wounded that never came. People either escaped or they died. The youngest victim was four years old; the oldest was 93. In all, 47 people died on the night of July 6, 2013, when an out-of-control oil train carrying Bakken crude oil derailed in the small Quebec town of Lac-Mégantic, 22 miles from the U.S. border.

Although none of this year's accidents caused fatalities, each of those trains was traveling a route that included heavily populated areas. Photo credit: Sloan Nelson

The fireball that destroyed half of Lac-Mégantic burned for two days. Seven victims were never found. According to the coroner's office, they were "completely vaporized." The few town buildings that survived the conflagration were later razed because of oil contamination. Lac-Mégantic was obliterated.

The railroad operator has since gone bankrupt, forcing the community and local government to shoulder the cost—close to $2 billion—of cleaning up and rebuilding the town.

During the past six years, we've seen a huge surge in the transport of extreme crude oil trains and, so far, Lac-Mégantic is the worst consequence. It is not, however, the only one. Lac-Mégantic was just one of six major derailments of trains carrying crude oil in 2013. Last year, there were five more. This year, five trains have exploded. Although none of this year's accidents caused fatalities, each of those trains was traveling a route that included heavily populated areas.

Two factors are responsible. One is the extreme volatility of fracked oil and tar sands oil. Both are extremely combustible, making them challenging to refine and dangerous to transport.

The other factor is the aging and inadequate infrastructure of a rail system that was never designed to carry such hazardous cargo. As a result, the U.S. had a total of 144 oil train incidents last year. In 2009, there was only one.

The truth is that if we keep shipping dangerous oil by train under unsafe conditions, it's only a matter of time before there is another tragedy. The Department of Transportation estimated that we could see a disaster like the one at Lac-Mégantic every two years. What's more, it could happen almost anywhere. Thousands of oil trains are crisscrossing the U.S. as oil companies ship extreme oil from the tar sands and from shale oil fields to coastal refineries and ports, where much of the oil is processed and exported to the world market. ForestEthics has calculated that 25 million of us live within one mile of tracks that carry oil tanker cars. My own family lives just a couple of miles from one of those rail lines.

Shipping extreme oil by rail is a risk that oil companies are willing to take on our behalf because it gets their product to where it can fetch the highest price. That business is also worth billions each year to railroads. That the rail and oil companies would put profits first is disappointing, but not surprising. What's both disappointing and hard to believe is the Obama administration's inadequate response.

A couple of months ago, the U.S. Department of Transportation (DOT) issued new regulations for trains carrying crude oil, but the new rules don't do enough to address what the department itself called the "real and imminent danger" of another disaster. For instance, under Obama’s new regulations, getting dangerous tank cars off the rails could take 10 years. And trains with fewer than 35 of those tank cars are exempt altogether.

No good reason exists for allowing oil companies and railroads to ship millions of barrels of explosive oil through our communities in unsafe tank cars. That's why the Sierra Club is challenging the DOT's new rules in court. We want unsafe tank cars made off-limits to extreme oil immediately. We're also working with local communities to stop Big Oil from building new export terminals to spur ever more oil trains on the tracks.

Of course, the real solution is to recognize that extreme oil deserves no place in our future. As our country continues to move beyond oil, the most dangerous and polluting sources must be the first to go. Americans shouldn't have to choose between a bomb train exploding in their backyard or an oil pipeline poisoning their water. Instead, we should expand investments in public transportation and efficient vehicles—policies that have led to declining U.S. oil consumption over the past decade. We don’t need this dirty oil, and it should stay in the ground.

Now, though, it's time to focus on that real and imminent danger. Yesterday's anniversary of the tragedy in Lac-Mégantic marked the beginning of a week of action to Stop Oil Trains, with more than 100 events across the U.S. and Canada. There's no better time to send a message to President Obama asking him to immediately ban the shipment of explosive crude oil in unsafe tank cars—before the next tragedy.