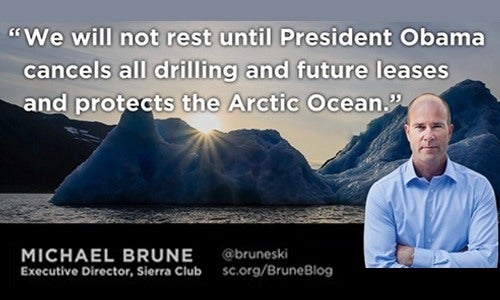 The Obama administration inched a little closer to disaster yesterday when it issued almost-but-not-quite final approval to Royal Dutch Shell to drill in the Chukchi Sea this summer. Because Shell’s capping stack (a critical piece of emergency response equipment) is currently on its way to Portland, Oregon, aboard a damaged icebreaker that requires repairs, the oil company is allowed to drill only part way into the seafloor—stopping short of where the oil is. If and when the capping stack gets to the proposed drilling site, Shell could then reapply for permission to resume drilling the rest of the way.

Last week, I wrote about why letting Shell into the Arctic makes no sense. It’s a case of taking huge risks to get something we don’t need. In fact, not only do we not need that oil and gas—we can’t even afford to use it if we want to meet the urgent imperative to limit climate disruption.

So why has the administration allowed things to go this far? If this were a wedding with a reluctant bridegroom, we’d be listening to the minister clear his throat and gaze out over the congregation. I don’t know. Maybe, even though they know this is a bad idea, they just don’t have the guts to call it off.

But you know what? That’s the wrong analogy. What’s about to happen in the Chukchi Sea is more like a blind date than a shotgun wedding. Even if Shell manages to get its act together with its exploratory drilling this summer, it will still need approval for commercial drilling and it will be even harder to make a case that such drilling can be done safely. Shell would also need to install hundreds of miles of pipeline, both on the seafloor and dry land. The process could take a decade or more and every step along the way, we have opportunities to make the case that clean energy is better for our country and our planet. And the longer this drags on, the more obvious it will be that drilling in Arctic waters is an unnecessary invitation to disaster.

When Shell’s damaged ship arrives in Portland, we’ll be there. When Shell cuts corners or takes dangerous risks, we’ll be there. When this or any other administration flirts with selling more oil leases in the Chukchi and Beaufort seas, we’ll be there, in the courts and on the streets. We’re in this for the long haul, along with the hundreds of thousands of Americans who’ve already joined the growing #ShellNo! movement. We’re in it for the Arctic, for the wildlife, for the Native Alaskans and for the climate. And we’re in it to win.

We will not rest until President Obama cancels all drilling and future leases and protects the Arctic Ocean.