Underwater Museum of Art Attracts Divers, But Is It Enough to Save the Reefs? 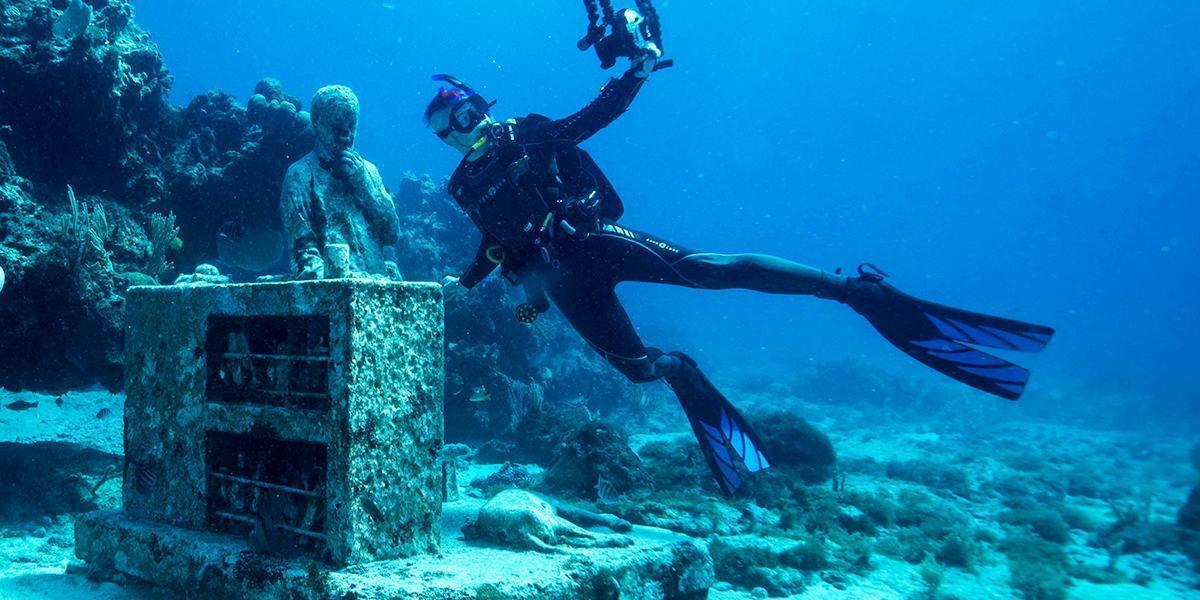 The Underwater Museum of Art is meant to protect nearby reefs from intensive diving by diverting scuba divers. But some conservationists say it's more of a business venture than a conservation measure. Photo credit: Ratha Grimes

More than 20 feet below the surface of the water, on the sandy sea floor between Cancún and Isla Mujeres in Mexico, a lobster takes refuge beneath a miniature concrete house. Scuba divers watch as the lobster slinks underneath the foundation. Farther on, hundreds of statues stand in tight circles. A little girl holds a purse close to her chest. A man looks straight ahead with a broom in hand. A thin layer of algae, sponges and coral covers the statues from head to toe.

The statues, the house and the lobster are all part of the Underwater Museum of Art, a project intended to divert scuba divers from the overused reefs in the national park Costa Occidental Isla Mujeres, Punta Cancún y Punta Nizúc. The park is near Cancún and Isla Mujeres, an island 13 kilometers off the Cancún coast. Inexperienced divers can harm the reef by accidentally breaking corals. But some scientists are skeptical of the museum’s conservation value. And though it’s not hurting the reef, they fear the museum may distract from more important threats to reef health such as coastal development and inadequate water treatment.

“It’s a good business,” Roberto Iglesias Prieto, a reef researcher at the Institute of Marine Sciences and Limnology just outside of Cancún, said. “The problem is that it’s sold as a conservation measure.”

In the years leading up to the creation of the museum, several powerful hurricanes damaged the reefs in the national park. Mexico’s National Commission of Protected Areas considered closing the reefs to tourism to allow them to recover. That sounded like bad news to the dive operators in the area. Closing the reefs would hurt business, so divers and park managers worked together to find a compromise.

In 2009, the diving community and the protected areas commission decided to create an underwater museum. It seemed like the perfect solution: Divers would find the site interesting, it would take pressure off the nearby coral reefs and it would provide habitat for sea life.

There’s just one issue: Iglesias Prieto doesn’t believe tourists are to blame for the deterioration of the reef. “They invented a problem and then solved it,” he said, adding that the real threat is water pollution. “Coral reefs grow in places where the water is very transparent. And what we have here are discharges of very dirty water.”

Susana Enriquez, another reef researcher at the Institute of Marine Sciences and Limnology, agreed, pointing to the influence of the hotel industry in the decision-making process. “As long as the private sector has priority in nearly all decision making and as long as the sustainability of this natural heritage and the value of this natural heritage doesn’t have a stronger position, it’s just maintaining the appearance of doing something while complying with the interests of investors that use natural resources for private benefit.”

The wastewater from the city of Cancún gets treated, but it’s still high in nitrogen and phosphorous when it leaves the treatment plant. The treated water flows into Nichupte, the salty lagoon that separates the city of Cancún from the hotel zone and eventually makes its way to the ocean. In the low-nutrient waters of the Caribbean, the nitrogen and phosphorous act like fertilizer for fleshy algae. The algae, which wouldn’t grow in nutrient poor water, starts to take over the reefs, eventually outcompeting the coral.

Fleshy algae is now widespread throughout the Mesoamerican reef system, which stretches from the tip of the Yucatán Peninsula in México to Honduras. And it’s becoming more prevalent. The Healthy Reefs Initiative, an international effort to track the health of the Mesoamerican reef, found that fleshy algal cover increased from 13 percent in 2006 to 23 percent in 2014. 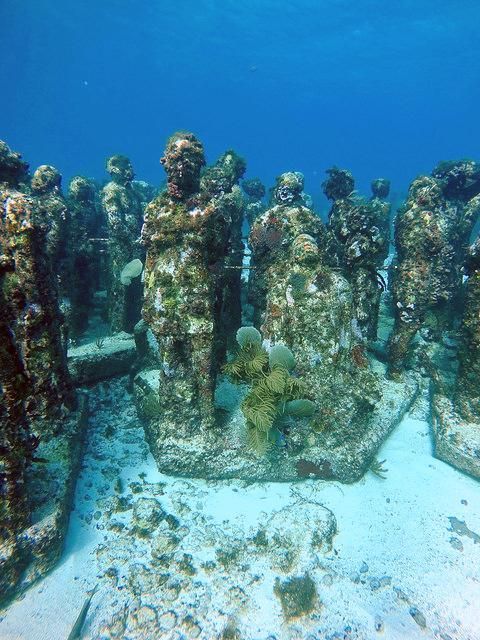 Wastewater high in nitrogen and phosphorous is spurring algae growth in the region and algae is competing with corals for space on the statutes. Photo credit: Marc Dicklin

The algae is taking over the museum as well. The museum provides a habitat for new coral colonies—coral polyps can attach to the hard surface of the statutes—but at the same time, fleshy algae has moved in to the noses, ears and mouths of the statues. The algae competes for space with the coral and can block incoming sunlight by growing right on top of the coral.

Jaime Gonzalez Cano, former director of the national park where the museum is located and one of its founders, acknowledged the threat of water pollution, but said scientists underestimate the impact scuba divers have on the reef. The Cairns planning area—one of the most visited areas of the Great Barrier Reef in Australia—covers about 7,700 square miles and receives close to a million visits each year. In comparison, the Costa Occidental Isla Mujeres, Punta Cancún y Punta Nizúc national park in Cancún covers about 33 square miles—less than one percent of the size of the Cairns planning area on the Great Barrier Reef—and receives about 750,000 people per year.

That’s a lot of visitors in a relatively small area. Gonzalez Cano estimated that the museum kept roughly 200,000 visitors off the natural reefs in 2015. He doesn’t have the hard data to prove it, but said he can see an improvement in reef health when he goes diving.

Gonzalez Cano recently left the park to become a researcher at the National Institute of Fisheries, but as park director, he kept a severed head made of concrete behind a filing cabinet in his office to demonstrate his point. An inexperienced diver knocked it clean off one of the statues in the underwater museum. “If that happens with one of these things, which are pretty hard, imagine what it would do to the coral,” he said.

He isn’t the only one who thinks divers have a negative impact on coral reefs. “Diving tourism does have … strongly negative effects on coral reefs where it’s intensive,” said Nanette Chadwick, a researcher at the University of Auburn who has studied the impact of diving on reefs in the Red Sea, Florida and the Caribbean. “But it should not detract government and public interest away from the other serious issues affecting reefs.” She listed climate change, overfishing and nutrient pollution as the three biggest problems facing reefs globally. She said there’s good evidence that artificial reefs in the Red Sea can reduce the impact of divers. “If you remove and reduce the impact of diving tourism, it helps the reef to be more resilient to these other impacts,” she said.

Part of the problem in Cancún is that managers of protected areas don’t have the power or resources to tackle the most important threats to the reef. Back at the office of the protected areas commission, when he was still serving as director of the park, Gonzalez Cano pointed out the window. “Look at the boats. I don’t have any captains,” he said, referring to the patrol boats tied up to the docks just outside. They even cut the phone line to the office.

Gonzalez Cano said he didn’t have the power to change public policy regarding wastewater treatment. In the midst of budget cuts, he had to wrangle scuba divers, politicians, hotel owners, scientists and tourists. “It’s a combination of everything,” he said. Pollution, climate change, overfishing and tourism all present threats to the reef. For now, at least, the park is focused on controlling the divers.