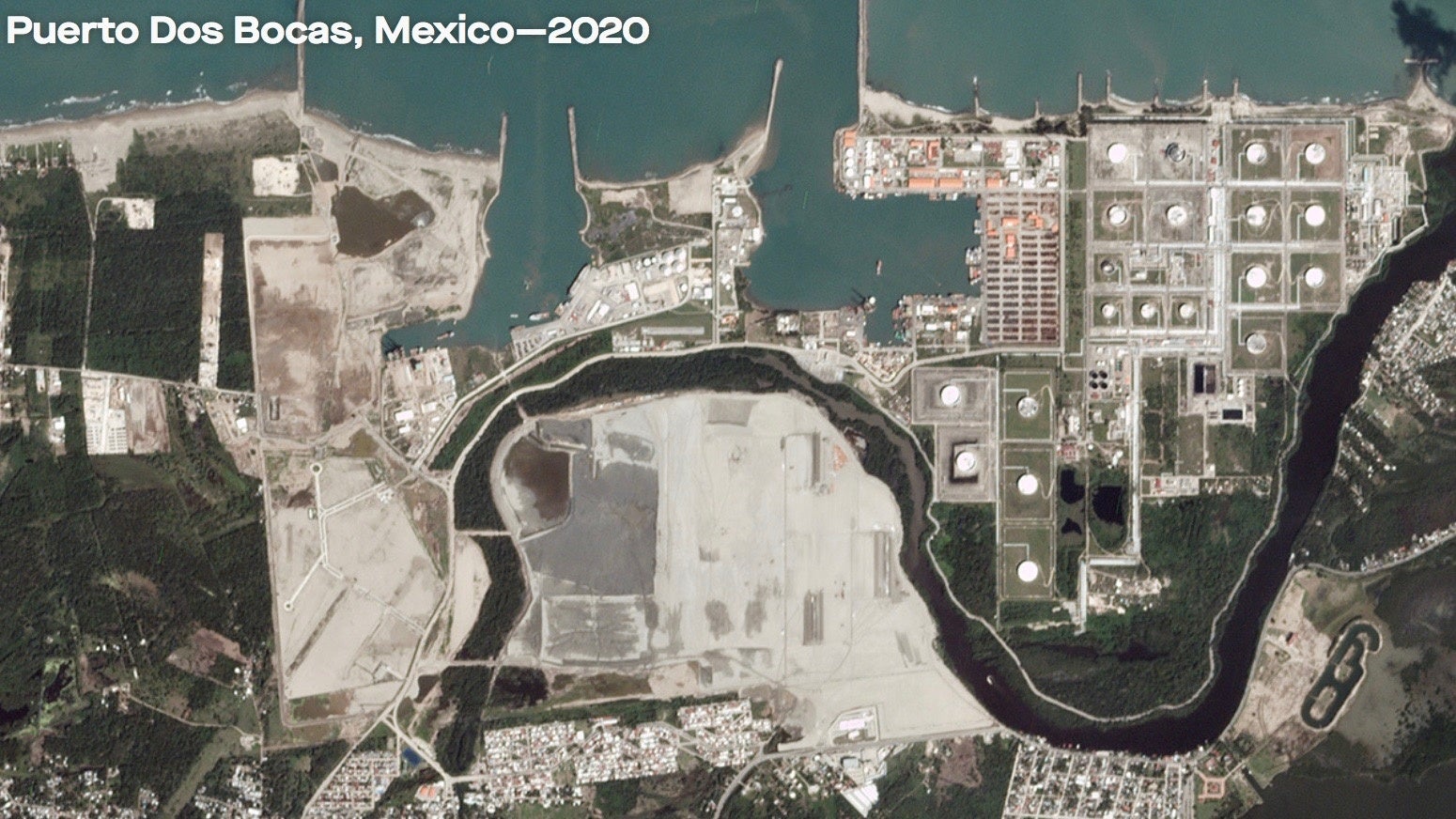 Mangrove forests, which straddle land and sea, provide enormous environmental benefits. Not only do the sequester carbon, pulling greenhouse gasses out of the atmosphere, they reduce flooding and erosion from storms, serve as nurseries for fish and filter pollutants from water. Research shows that, tree-for-tree, mangroves trap three to five times more carbon than rainforests can. 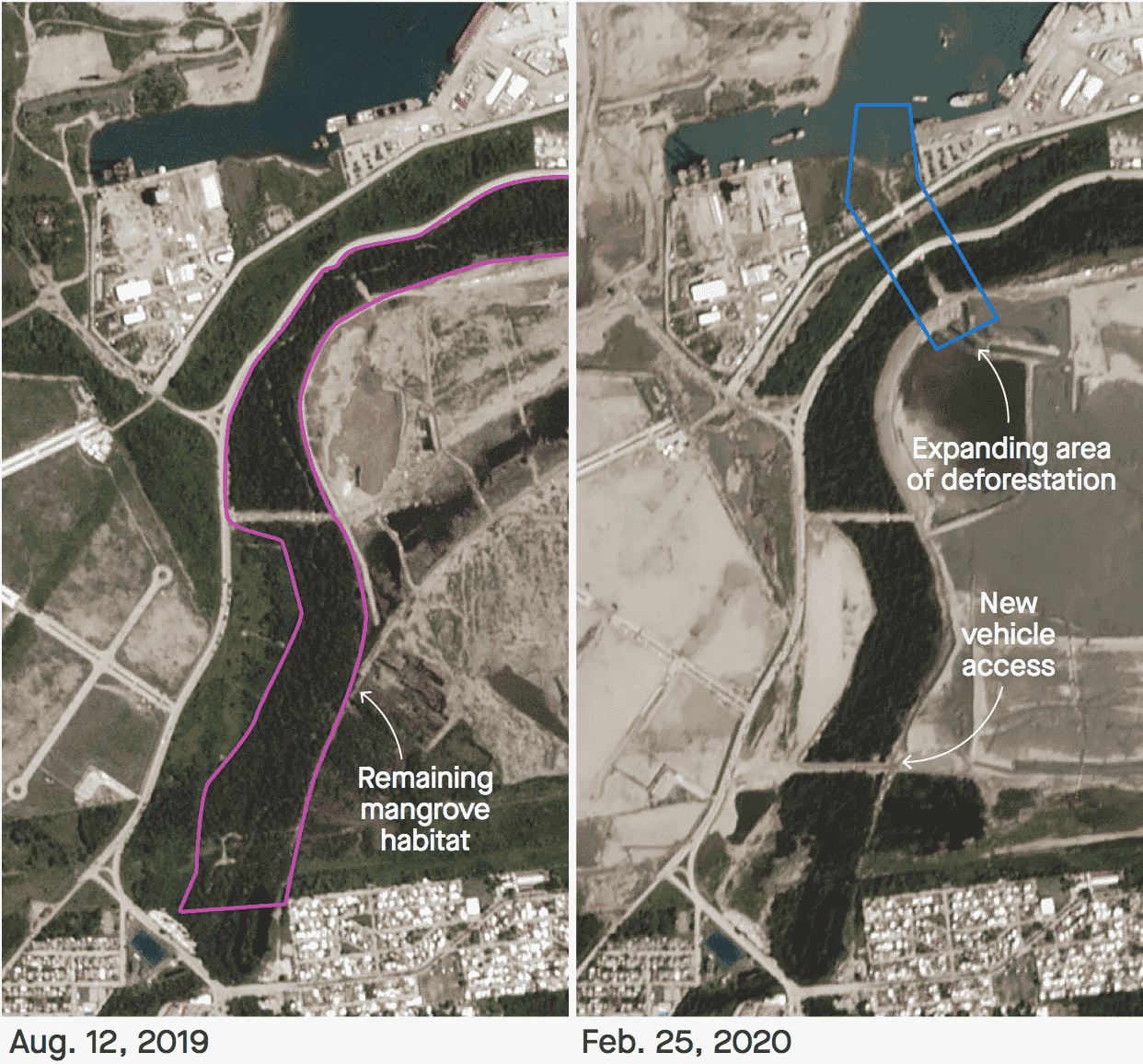 Lopez Obrador approved the project in Tabasco, his home state, to revive the state-owned oil giant, which has suffered from dysfunction recently. Shortly after the president approved the project, a third party uprooted large swatches of mangroves, even though they are protected and vital to Mexico’s economy, according to Quartz.

The complex ecosystems the trees create provide almost 6 percent of Mexico’s GDP, according to the University of California, San Diego, as Quartz reported. While the mangroves are supposed to be protected, the satellite imagery shows that they continue to be felled to make way for roads. Pemex, or a third-party, defied a government order by cutting down the mangroves and is now asking for permission to raze more so it can build a bridge.

The actions have environmental advocates worried about Mexico’s commitment to a sustainable future, especially since the government canceled a 0,000 fine for a company accused of destroying thousands of acres of mangroves.

“The administration promotes an oil refinery, and to build it destroys threatened mangroves even though Mexico is part of the Paris accords,” Alejandra Rabasa, an environmental lawyer in Mexico City, said to Sierra Club.

Gustavo Alanis-Ortega, president of the Mexican Center for Environmental Law, told Quartz that there should be an investigation into Pemex’s role in the deforestation, “If they are indeed breaking the law [at Dos Bocas], this shows that there is no real commitment to legality and the rule of law” in Lopez Obrador’s government,

The area where the deforestation has taken place is home to many endangered animals, including a jaguarundi wild cat, and protected species of snakes, iguanas and birds, as Reuters reported. Futhermore, Pemex executives actually proposed that the area be made into a protected nature preserve about a decade ago, according to Reuters.

Now, a little over a year into office, Lopez Obrador seems to be following in the footsteps of the presidents of other large countries in the Americas, mainly President Trump and President Bolsanaro in Brazil, by reversing environmental progress. He has put the kibosh on renewable energy projects, tried to cut subsidies to renewable energy companies, and usurped a government plan to bolster investments in green infrastructure, according to Quartz.

Meanwhile, the economic benefit of the Pemex refinery is questionable, since economists say it would be more cost effective to import oil than to build this refinery. Furthermore, mangroves have a proven economic benefit. According to Mongabay, researchers estimate that mangroves provide “ecosystem services” equal to 4,000 per hectare annually. Multiplied by their global span, that means the world’s mangroves provide around .7 trillion in services every year.

Mangroves also store much more carbon than scientists had previously thought, according to a study by 20 researchers around the world published in Environmental Research Letters.

“Protecting, enhancing and restoring natural carbon sinks must become political priorities,” Jonathan Sanderman of the Woods Hole Research Center and lead author of the study said as Mongabay reported. “Mangrove forests can play an important role in carbon removals because they are among the most carbon-dense ecosystems in the world, and if kept undisturbed, mangrove forest soils act as long-term carbon sinks.”

As Quartz reported, Mexico prioritized protecting its mangrove forests as part of Paris climate agreement commitments. Mexico has the fourth-largest area of mangroves in the world. However, mangrove deforestation is rampant across Mexico, and, according to the University of California, San Diego at the current rate, the country may lose half its remaining mangroves in 50 years.