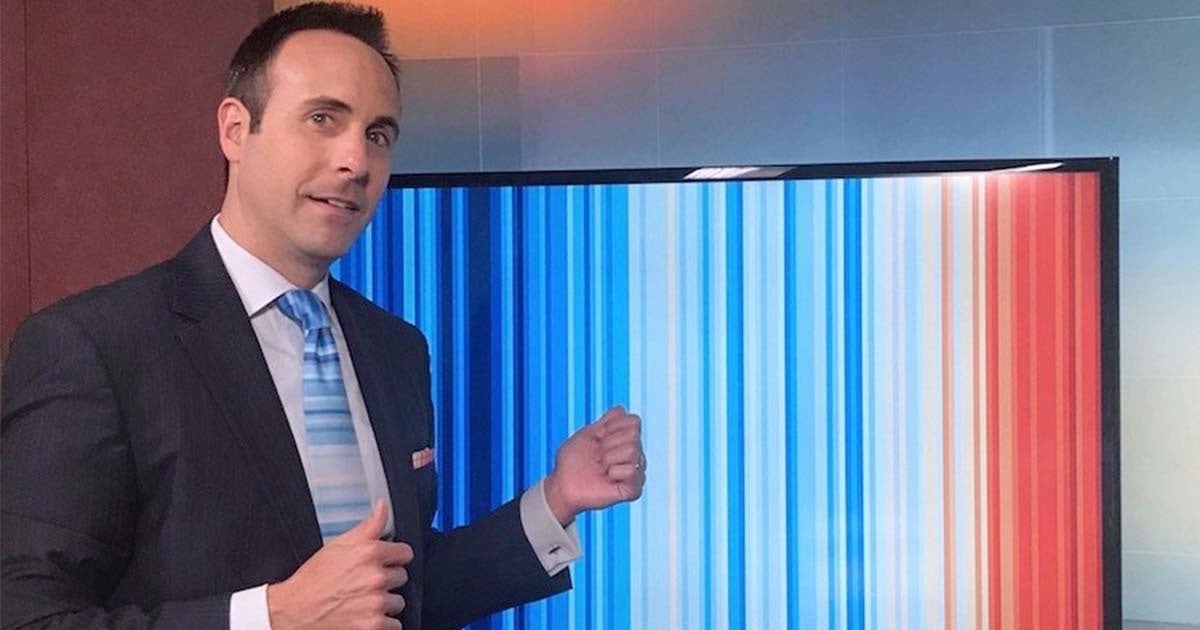 If you tune in to a TV weather report on today’s Northern hemisphere summer solstice, you might notice the meteorologist wearing a unique striped tie or necklace that begins in blue and changes to red.

This isn’t just a fun summer style. The design is actually University of Reading climate scientist Ed Hawkin’s “Warming Stripes” visualization, which represents the change in annual global temperatures from 1850 to 2017. Nearly 100 TV meteorologists are displaying it in some way on Thursday as part of Meteorologists United on Climate Change or #MetsUnite, Weather Underground reported.

Happy Summer Solstice! Tune into @ABCNews4 this morning for that hot forecast! Also check out my necklace today. Later this am I’ll explain the significance. #metsunite pic.twitter.com/1uP9LnXofE

#MetsUnite was launched by Jeff Berardelli, a meteorologist with CBS12 (WPEC) in West Palm Beach, Florida.

“The message is simple: humans have become a force of nature. Our influence on the climate matches or exceeds the impact of natural variations. It’s real. It’s us. It’s serious. And while the public opinion ship has veered in a favorable direction, we need an abrupt pivot, right now, to avoid the worst impacts of the iceberg called climate change,” he told Weather Underground.

Berardelli was especially inspired by the communication potential of the Warming Stripes design.

“I saw Ed Hawkins Warming Stripes pattern and the simplicity resonated with me. It is our job as meteorologists and station scientists to explain weather and climate in simple, memorable terms,” Berardelli told former American Meteorological Society president Dr. Marshall Shepherd for a Forbes opinion piece.

Here is the Climate Change Tie that #MetsUnite will be wearing. A great idea by ⁦@WeatherProf⁩ JeffBeradelli. The colorful tie shows the temperatures year by year of the warming earth from 1850 (top) to the current decade (bottom) pic.twitter.com/7VEFkbcPR3

As Shepherd pointed out, TV meteorologists are the only scientists the average citizen encounters daily. But many have been hesitant to discuss climate change with viewers, partly because meteorology and climatology are different fields, so weather forecasters don’t always feel comfortable presenting on a topic they might have only taken a single course on to earn their bachelor’s degree. Further, a few are climate skeptics, and others are afraid of alienating conservative viewers or have been told by managers to avoid the topic out of fear it might lower ratings, Shepherd wrote.

“Traditionally meteorologists have shied away from climate change communication,” Berardelli agreed in an email to Weather Underground. “Some don’t want to turn away unreceptive viewers, while others may feel that they don’t have a firm enough grasp on all the particulars. But the time has come for meteorologists to step up to the plate. This is our day job, and our reach as a group is vast. If we do not take the helm, who will do it?”

To help out his colleagues, Beradelli made several “Warming Stripes” products available from Zazzle.

Climate Matters manager Bernadette Woods Placky told Weather Underground that the summer solstice timing for #MetsUnite was an important part of the messaging.

“This is our season of extreme heat. We really want our local communities to know what’s going on. There’s so much confusion about climate change. These are TV mets delivering the science to really inform our communities,” Placky said.

Meteorologists are using the #MetsUnite tag on Twitter to show off their summer gear, and climate science expertise. Log on to see if your local TV weather person has joined in!

Good morning, everyone! #Summer starts soon! Also, pay attention to the #MetsUnite trend today. I'll explain why myself and many others are wearing this tie pattern… pic.twitter.com/Oy5dKhusmY