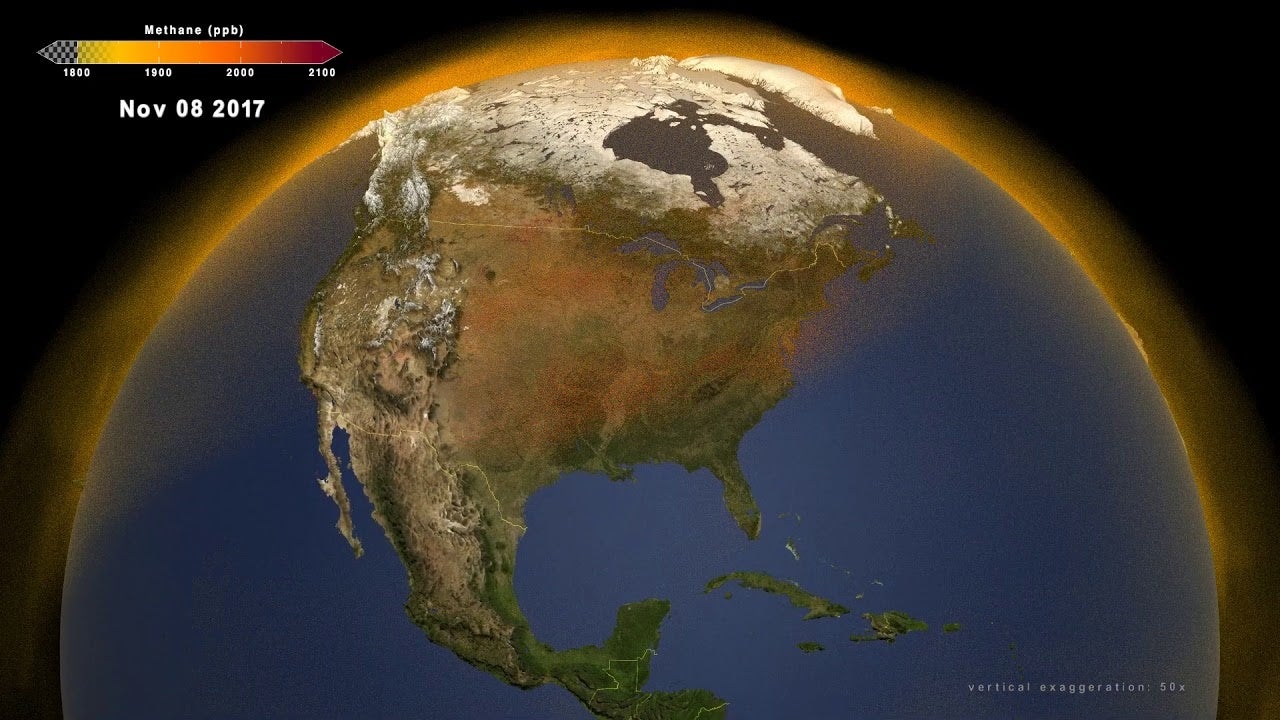 A three-dimensional portrait of methane concentrations around the world is helping researchers to understand the complex gas, which constitutes the second largest contributor to greenhouse gas (GHG) warming after carbon dioxide.

Methane is an important GHG that is emitted during the production and transport of coal, natural gas and oil as well from agricultural practices like rice cultivation and the raising of livestock, according to the U.S. Environmental Protection Agency (EPA). Once lofted into the atmosphere, high-altitude winds can transport methane far beyond its source, disproportionately impacting communities around the world.

“There’s an urgency in understanding where the sources are coming from so that we can be better prepared to mitigate methane emissions where there are opportunities to do so,” said research scientist Ben Poulter at NASA’s Goddard Space Flight Center in Greenbelt, Maryland.

During extraction processes, if methane leaks into the air before being used, a single molecule can trap the sun’s heat and warm the atmosphere, according to the Environmental Defense Fund. The largest source of man-made methane production is attributed to the oil and gas industry; about 10 percent of all GHG emissions from fossil fuels in the U.S. can be attributed to methane. Though methane has a shorter lifetime with lower concentrations in the atmosphere than carbon dioxide, the gas is eighty-four times more potent and needs to be considered when evaluating the impact of global climate change.

“It is estimated that up to 60 percent of the current methane flux from land to the atmosphere is the result of human activities,” said Abhishek Chatterjee, a carbon cycle scientist with Universities Space Research Association based at Goddard.

“Similar to carbon dioxide, human activity over long time periods is increasing atmospheric methane concentrations faster than the removal from natural ‘sinks’ can offset it. As human populations continue to grow, changes in energy use, agriculture and rice cultivation [and] livestock raising will influence methane emissions. However, it’s difficult to predict future trends due to both lack of measurements and incomplete understanding of the carbon-climate feedbacks.”

To determine methane’s role on Earth’s carbon cycle and its impact on the climate system, researchers at NASA combined multiple data sets from self-reported fossil fuel producers, government overseers and satellite observations. These were put into a high-resolution computer model to simulate the global movement of methane emissions based on known processes in certain environments while accounting for weather models and natural processes that break down the gas.

Methane’s global movements through space and landscapes are complex and can vary depending on many factors. Of note, the impacts of methane are felt disproportionately around the planet.

Europe was shown to be the only region to show a decrease in methane emissions over the last two decades, which may largely be due to measures prioritizing the use of renewable energy in a shift from fossil fuels like coal.

In South America, the Amazon River Basin and its associated wetlands flood seasonally, which creates oxygen-deprived environments that contribute a significant source of methane. Researchers estimate that around 60 percent of wetland methane emissions come from the tropics.

In Asia, more than 85 percent of methane emissions comes from human activities, with rice cultivation and livestock being the driving sources. Additionally, China’s economic expansion and increasing population have driven the demand for energy and resources.

“Agriculture is responsible for about 20% of global methane emissions and includes enteric fermentation, which is the processing of food in the guts of cattle, mainly, but also includes how we manage the waste products that come from livestock and other agricultural activities,” said Poulter.

Arctic and high-latitude regions account for about one-fifth of global methane emissions.

“What happens in the Arctic doesn’t stay in the Arctic,” said Ott, adding that the region is not currently a strong pulse of methane but “that could change dramatically over time.”

The findings will help to inform future field and satellite missions, as well as policy decisions.