Scientists Find a Cleaner Way to Extract Methane From Permafrost 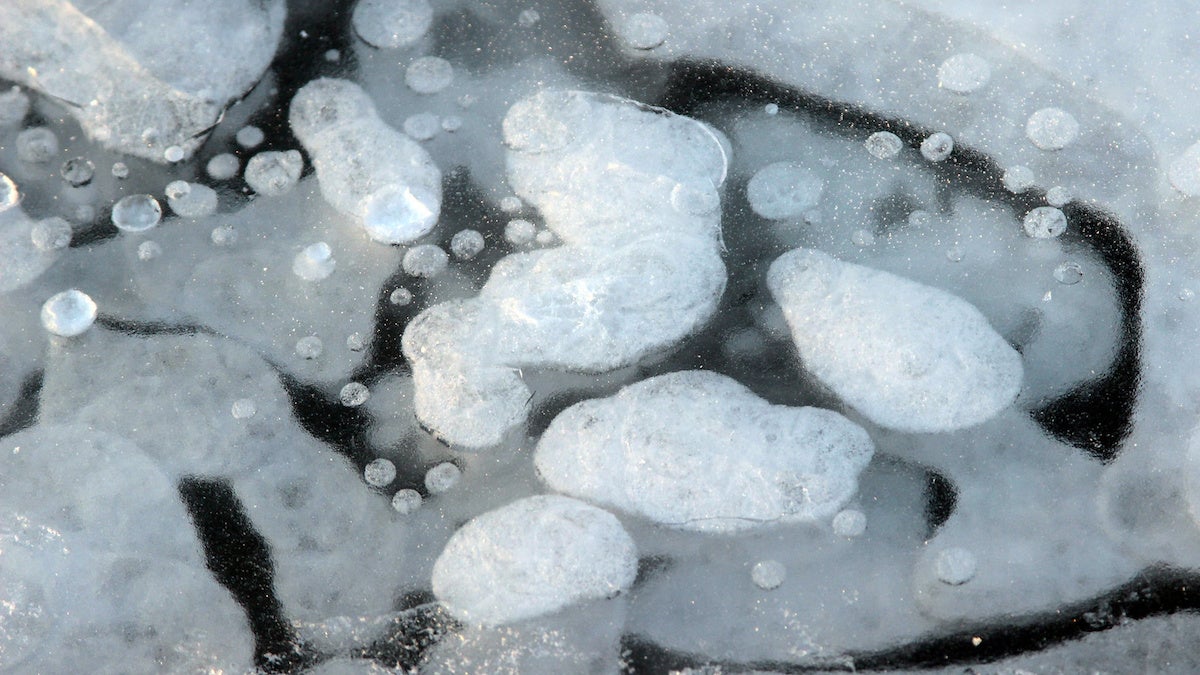 Methane gas bubbles are seen trapped in the ice of a frozen thermokarst lake, which has an active methane seep. Kevin Hand, NASA Jet Propulsion Laboratory

An international team of scientists says a new way of extracting methane gas trapped in permafrost has the potential to harvest more gas while burning fewer fossil fuels in the extraction process, as Newsweek reported.

The scientists from Skoltech University in Russia and Heriot-Watt University in Scotland looked at the gas hydrates, which are ice-like structures made up of water and gas. Frequently, the gas trapped with the water is methane. They found that they could use flue gas, which is generated during fuel combustion, to recover methane. Their findings were published in the journal Scientific Reports, as Newsweek reported.

By injecting hot waste flue gas from industrial plants into the gas hydrates, the scientists may have found a carbon sink that can trap the greenhouse gases created by industrial fuel combustion, according to New Atlas.

The new method is important because gas and oil explorations in the Arctic have the potential to accidentally release a lot of trapped methane into the atmosphere. Recently, the Arctic waters around Russia have become a hotbed of oil and gas exploration, but safely extracting the resources poses risks. The area is remote and desolate and lacks infrastructure, plus gas hydrates that are not handled properly may lead to unacceptable methane-levels released into the local atmosphere, according to New Atlas.

The climate crisis has triggered large swaths of ice melt in Russia’s Arctic waters. The country is looking to exploit the new openings by rapidly expanding oil and gas development. Russia has offered large tax cuts to energy companies willing to tap into the fossil fuels from its recently discovered reserves that opened up due to melting sea ice, as Newsweek reported.

And yet, according to the scientists, those gas hydrates are also a potential source for natural gas and a place to put unwanted greenhouse gases.

“Our approach not only helps extract methane and prevent its free release into the atmosphere, but also reduces carbon dioxide emissions,” said Evgeny Chuvilin, a leading research scientist at the Skoltech Center for Hydrocarbon Recovery (CHR), in a statement. “I would say our method offers a double dividend in terms of environmental safety.”

The method the scientists developed takes flue gas from coal-powered plants, metal refineries and other furnaces that use fuel combustion. It then takes the hot flue gas and pumps it into the gas hydrates. That starts a reaction where the methane is released and carbon dioxide replaces it and forms a new hydrate, as New Atlas reported.

The researchers found they were able to capture almost 82 percent of the carbon dioxide contained in the flue gas, as Newsweek reported.

Finding a way to trap flue gas could reap large benefits in reducing global greenhouse emissions, since it consists of several gases produced during fuel combustion. In addition to carbon dioxide, it contains carbon monoxide, nitrogen, sulfur dioxide, and water vapor, according to New Atlas.

As for the liberated methane, it can be used in a closed cycled where the gas powers an industrial plant and the flue gases are recycled to reduce emissions and to release more methane for the plant to use, as New Atlas reported.

“In comparison with potential methods such as thermal stimulation, depressurization, chemical inhibitor injection, CO2, or CO2-mixed gases (e.g., flue gas) injection is more environmentally friendly because of the potential to capture CO2 simultaneously with methane recovery,” the authors wrote in the study.