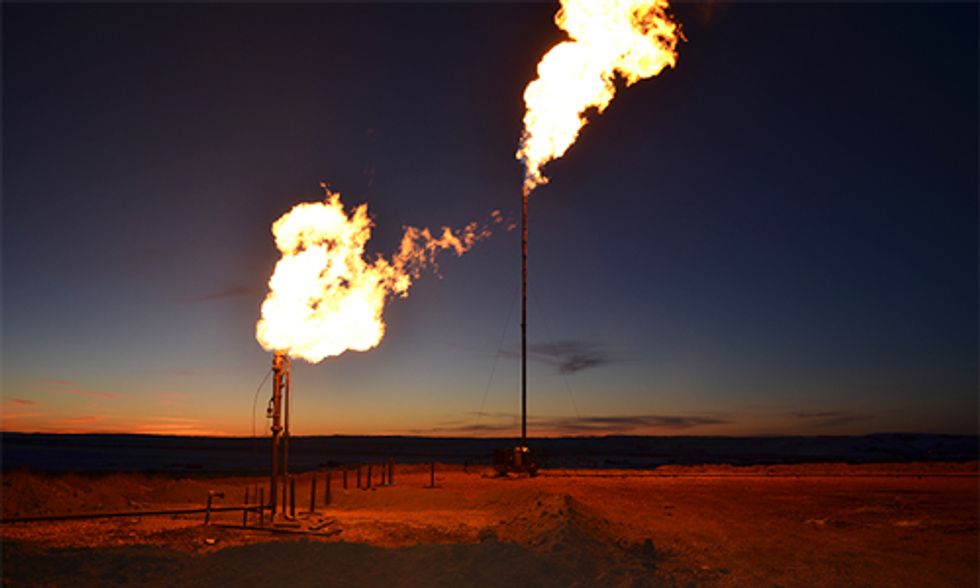 Flaring is the burning of natural gas that cannot be processed or sold. Flaring disposes of the gas while releasing methane emissions into the atmosphere. Photo credit: North Dakota Department of Health

And who is the biggest culprit for releasing methane in the U.S.? It is the oil and gas industry, which is the largest industrial source of methane pollution in the country, releasing 33 percent of all methane emissions in 2014.

There are a staggering amount of old and new wells with the potential to release methane. At least 3.5 million wells have been drilled in the U.S., with a quarter of those still active. Many old and new ones are leaking the potent greenhouse gas. Adding to the problem, there will be thousands of old wells leaking methane which the authorities do not even know the whereabouts of.

A new report, published by the Center for American Progress on Monday, reveals that the onshore oil and gas industry's methane emissions totaled more than 48 million metric tons of carbon dioxide equivalent or CO2e, in 2014.

To put this into perspective, this is the equivalent of 14 coal-fired power plants powered for one year.

The worst culprits were ranked in order and came out as: ConocoPhillips, Exxon, Chesapeake Energy, EOG Resources and BP.

There are other areas too which are suffering from chronic methane leakage from old wells. Yesterday, Bloomberg ran an article on the problems of methane leakage affecting Pennsylvania, the birthplace of the U.S. oil industry, where “century-old abandoned oil wells have long been part of the landscape."

Bloomberg reports that these abandoned wells as now the “focus of growing alarm," especially ones close to the new fracking fields, due to them leaking methane.

“We had so much methane in our water, the inspector told us not to smoke a cigar or light a candle in the bath," Joe Thomas, a machinist, whose 40-acre farm has at least 60 abandoned wells, tells Bloomberg.

Pennsylvania's Attorney General is now reviewing the rules requiring drillers to document wells within 1,000 feet of any new potential fracking site. The obvious worry is that abandoned wells might interact with new fracking wells, creating an easy methane escape route from the frack well. And in Pennsylvania only ten percent of abandoned wells are documented.

One person searching for these abandoned wells is Laurie Barr, who co-founded Save Our Streams Pennsylvania. Over the last five years she has located almost 1,000 wells, most of which were not recorded.

Bloomberg quotes Mary Kang, a postdoctoral fellow at Stanford University in California who co-authored a widely cited paper on methane leakage from Pennsylvania's wells. “These old wells are emitting methane into the atmosphere and they are worth considering in greenhouse-gas emissions inventories," she said.