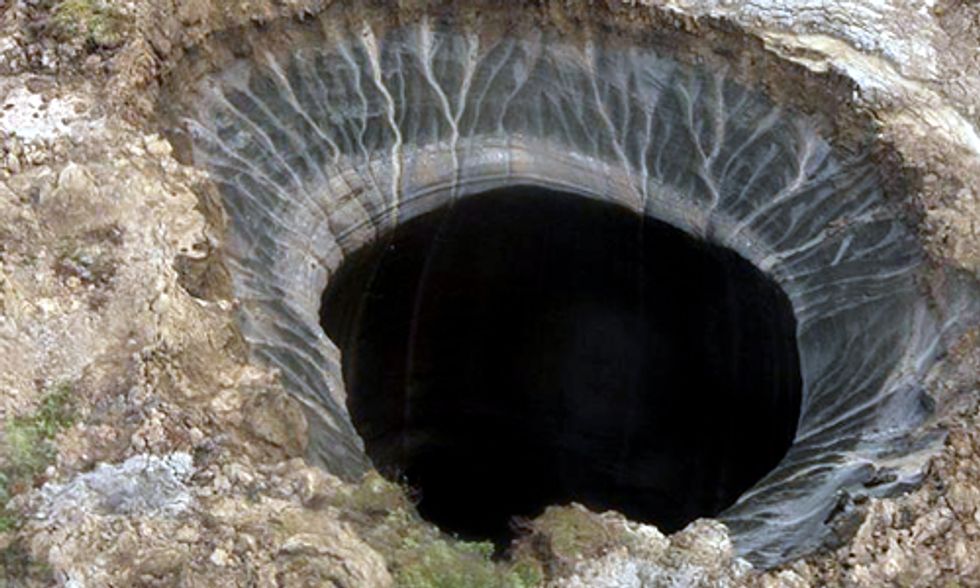 Scientists think this mysterious crater may be a giant methane blow-hole that signals the beginning of runaway climate change.

They are calling the point when frozen arctic methane in Canada, Alaska and Russia starts erupting into the atmosphere dragon burps.

Dragon’s mouth ... a crater recently discovered in the Yamal Peninsula, in Yamalo-Nenets Autonomous Okrug, Russia. Russian scientists said that they believe the 60-meter wide crater could be the result of changing temperatures in the region.

Check out this story that contains graphs showing such elevated methane levels that they labeled them WTF.

Rising trend ... the “dragon’s breath” methane spikes have been recorded eight times in the past 22 years.

If you have ever wondered whether you might see the end of the world as we know it in your life time, you probably should NOT read this story nor study the graphs or look at the pictures of methane blow holes aka dragon burps.

I think Dr. Jason Box, who has highlighted the appearance of dangerous spikes in methane above Siberia, sums it up best, “If we don’t get atmospheric carbon down and cool the Arctic, the climate physics and recent observations tell me we will probably trigger the release of these vast carbon stores, dooming our kids’ to a hothouse Earth."