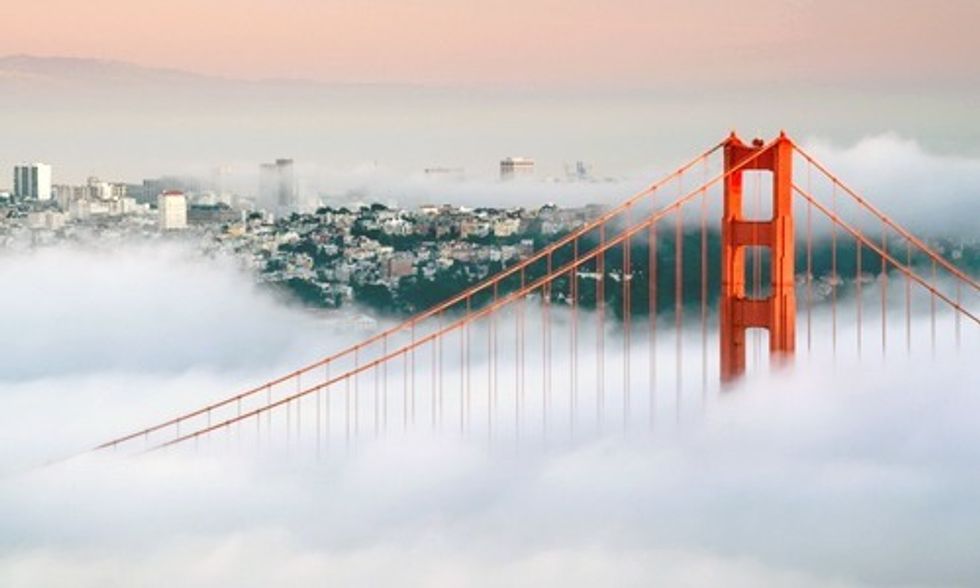 Picture San Francisco's Golden Gate Bridge and you probably imagine it enshrouded with fog. Fog is an iconic aspect of the Northern California climate, but many don't realize that this coastal fog is ladened with mercury.

For the past five years, researchers from University of California, Santa Cruz and other institutions have been sampling fog in central California. Two years ago, the researchers expanded their scope to seven locations stretching from Monterey to Eureka as part of the FogNet project, which is funded by the National Science Foundation.

Researchers found the concentration of monomethyl mercury is 19 times higher in fog collected on land compared to rain. They told the San Francisco Chronicle that exposure levels are relatively low for humans, but the discovery still worried them.

“On a relative scale, the levels of mercury are quite low and of no health concern,” Peter Weiss-Penzias, a professor at UC Santa Cruz, told the Chronicle. “But it does bioaccumulate,” or build up in the food chain.

It's already well known that monomethyl mercury bioaccumulates in aquatic food webs, often making fish and other animals unsafe for human consumption. But there has been nothing in the scientific literature about mercury in the fog and its potential impact on terrestrial ecosystems until now.

"There haven't been reports of monomethyl mercury measurements in fog water in the scientific literature," Weiss-Penzias said. "But these elevated concentrations suggest that fog could be a significant source in coastal environments."

According to the Chronicle, "the scientists determined that mesoscale eddies—large, circular currents of water from the California current—are depositing dimethyl mercury into the fog, where acidic marine aerosols—particles left over from evaporated droplets of ocean spray—convert it into its monomethyl mercury form. That compound is then blown ashore in the fog, where it is deposited on the coastal landscape."

The source of monomethyl mercury in the ocean is debated, but emissions from coal-burning power plants "likely make a significant contribution," Weiss-Penzias said.

So far, researchers have shown that, at the highest periods of fog, mercury levels in wolf spiders along the coast exceeded the U.S. Food and Drug Administration’s three parts per million safety threshold.

And preliminary research on mountain lions showed that larger animals are susceptible too. They believe mercury levels in these large cats could be, on average, 10 times higher than those of their inland counterparts. They presented their latest findings at the fall meeting of the American Geophysical Union last month in San Francisco. They are currently writing up a report, which they plan to submit to Science.

The FogNet team said more research needs to be done to determine how dangerous the exposure is for humans and if other chemicals are making their way into the fog. They will continue to collect data through 2016. In the meantime, they said regulators may want to limit mercury pollution in the atmosphere.

“I am hopeful that when all the exposure routes are added up, we will see that we are receiving quite a burden,” Coale said, “and that perhaps we should be considering limiting [mercury] emissions, particularly from coal-fired power plants—not just from a climate change perspective, but from an ecosystem health perspective as well.”

For a more in-depth explanation of how fog transports mercury from the sea to land, watch this video showcasing research led by Coale at the Moss Landing Marine Labs: