How to Heal Emotional Trauma After a Climate Disaster 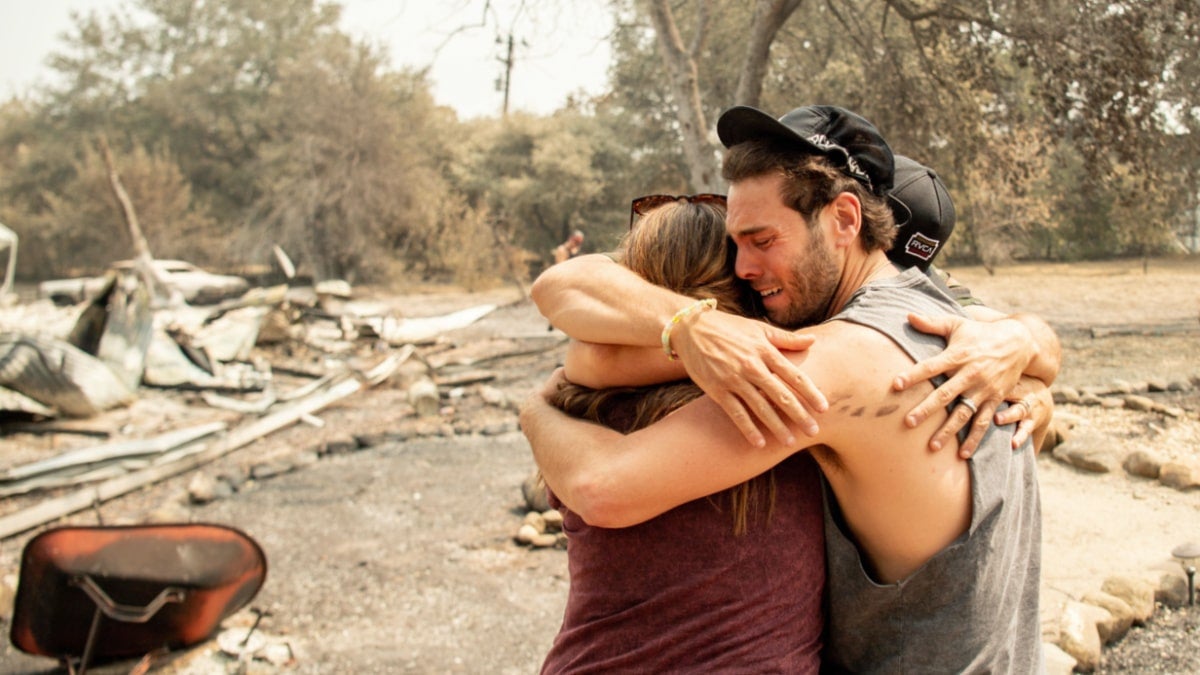 Family members embrace at the burned remains of their home after the LNU Lightning Complex fire in Vacaville, California on August 23, 2020. Josh Edelson / AFP / Getty Images

Disasters are stressful. Our warming world keeps adding fuel to the fires — and floods and hurricanes, among other calamities. What can be done about the trauma that follows?

The Center for Public Integrity, Columbia Journalism Investigations and our partners in newsrooms around the country have been reporting on this for months. We’ve learned a lot by asking experts: people who’ve lived through disasters and the professionals who study this or provide hands-on help. More than 230 shared their experiences in our detailed survey, and we interviewed dozens of additional people.

Be aware. It might seem simplistic, but you’re one step ahead if you know that surviving a disaster and dealing with the long aftermath can be hard on mental health. Keep an eye out for symptoms, not just obvious ones like constant worrying or feeling short-tempered, but also trouble sleeping (or oversleeping), overeating (or lack of appetite) and heavy drinking. Remember that kids can feel the impact, too, and that might show up as acting out or trouble in school.

You might notice effects right away. Or they might take a while to surface. Either way, it’s normal — and it can linger. Hilton Kelley, whose community of Port Arthur, Texas, was heavily affected by 2017’s Hurricane Harvey, sums it up: “It will be years before we get out of this.”

Seek support. Most people who took our survey didn’t get mental-health services after their disaster experience. Some couldn’t afford therapy or other assistance. Some thought they didn’t need it, though the emotional challenges a portion of them reported made us wonder if support could have made the hard times more bearable. Some free avenues to try:

Our investigation found that many survivors never hear about or receive help from the federal crisis counseling program, the country’s main response to the mental-health consequences of disasters. As extreme weather worsens, that puts more pressure on other forms of assistance.

“We don’t have enough mental-health providers in all of the country to manage huge, large-scale disasters — nor will people use them,” said Dr. Joshua C. Morganstein, assistant director of the Center for the Study of Traumatic Stress at the Uniformed Services University of the Health Sciences. “That is why communities and organizations become so important.”

Offer help. Some disaster survivors found solace as they assisted others, one way to get some control back in a situation primed to make people feel powerless.

“It helped me to keep my sanity,” said Kelley, a restauranteur whose family’s post-disaster efforts included cooking gumbo for people in the community.

Solemi Hernandez, a Florida resident whose employer shuttered after Hurricane Irma in 2017 and who searched for weeks for a new job, saw personal benefits from volunteer work. “Losing myself in service to others … is a way I became stable and not as depressed,” she said.

Take action. Identifying a problem that caused or worsened the disaster’s impacts — and then pressing for fixes — is a key way some survivors bolstered their wellbeing.

Hernandez, a regional coordinator for the Citizens’ Climate Lobby, presses for action on global warming, a force multiplier for disasters. Her advice to survivors: “Use that trauma. Turn that trauma and that suffering into being politically active.”

Kathleen Sullivan, who lives west of Chicago, doggedly advocated for stormwater-control measures in her city’s flood-prone neighborhoods, including hers. Twice her house flooded; two more times she had close calls. It took years, but showing up at city council meetings, organizing with other residents and not letting elected officials ignore the problem got results. It was also a powerful coping mechanism.

“We met all these awesome people we wouldn’t have met,” said Sullivan, who linked up with Higher Ground, a national flood-survivor group. “And we can sleep now — mostly — when it rains.”

Kevin McKinney’s neighborhood in Richwood, Texas, south of Houston, weathered Hurricane Harvey. The devastating flood, he said, came four days later. He and hundreds of other neighbors organized, then sued a nearby city whose floodwater diversion efforts, they allege, damaged their homes. That complaint is pending.

As disasters hit with more frequency, communities also face questions about how to organize help in the aftermath. Areas with fewer resources need more support to recover. But too often, studies show, they get less of it instead. Dr. Octavio N. Martinez Jr., executive director of the Hogg Foundation for Mental Health in Texas, wants to see that change.

“We ought to have a disaster response strategic plan designed to prioritize the ZIP codes that we know are going to end up suffering the most and are going to have the most difficulty in recuperating,” he said.

Prepare for next time. Almost all the survivors we surveyed were concerned more disasters will hit their community. We heard from a lot of people in regions struck by multiple wildfires, floods or hurricanes in the last decade, and some cope with that anxiety by getting prepared.

Kelley built a berm around his house to reduce flood risks. R.L. Miller, whose California community in Ventura County was burned by the Woolsey Fire in 2018, is diligent about clearing brush on her property.

Others are thinking of leaving — or they’ve already left. A handful of survey respondents said they moved out of their community at least in part to try to avoid another big hurricane, flood or fire.

Whether to stay or go is a fraught decision. It’s one that more and more Americans will be forced to confront as climate change worsens — further increasing inequality. Dr. Irwin Redlener with Columbia University’s National Center for Disaster Preparedness urges communities to get ahead of this.

“We have to prepare for more dramatic changes,” he said. “Many places that may be habitable right now may become uninhabitable. … We’re just at the beginning of the most serious consequences of unabated climate change.”

Hernandez, who lives in Naples, on Florida’s Gulf Coast, sees her climate action as one form of long-term prep work. Hurricane Irma, a wildfire in her county in May, local flooding from heavy rain, the increasingly unbearable temperatures in the summer: These are warnings of a future she wants to avert.

“I never thought about moving. I love this place,” Hernandez said. “We can do something to save it.”

This story originally appeared in The Center for Public Integrity and is republished here as part of Covering Climate Now, a global journalism collaboration strengthening coverage of the climate story.