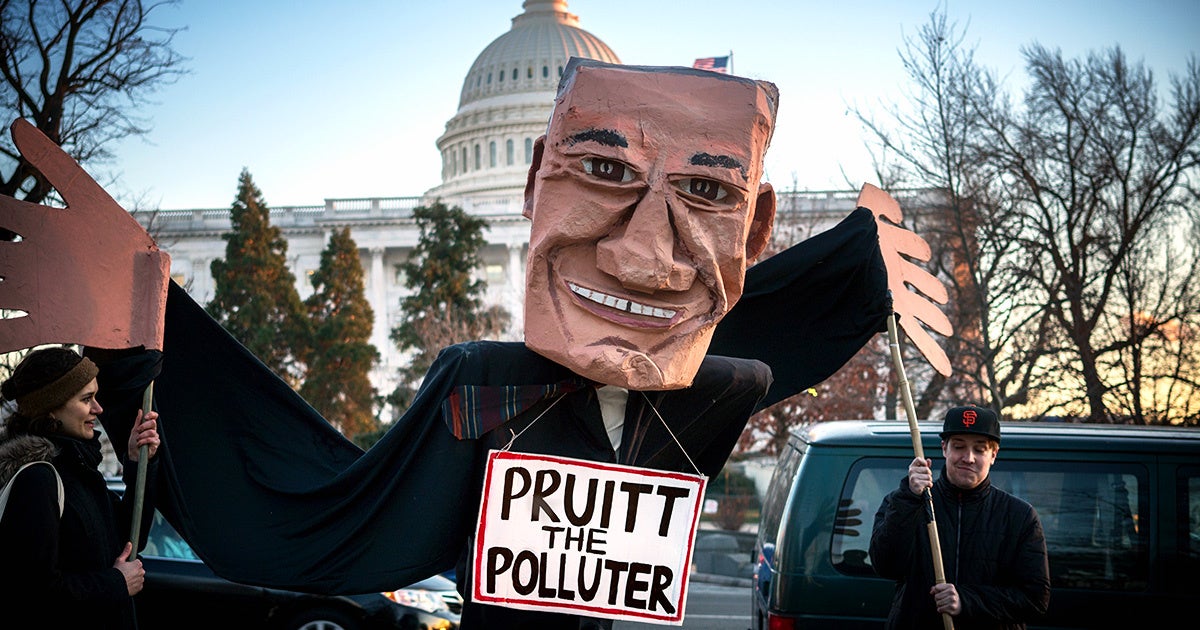 U.S. Environmental Protection Agency (EPA) Administrator Scott Pruitt recently proposed eliminating federal tax credits for wind and solar power, arguing that they should “stand on their own and compete against coal and natural gas and other sources” as opposed to “being propped up by tax incentives and other types of credits….”

Stand on their own?

Pruitt surely must be aware that fossil fuels have been feasting at the government trough for at least 100 years. Renewables, by comparison, have received support only since the mid-1990s and, until recently, have had to subsist on scraps.

Perhaps a review of the facts can set Administrator Pruitt straight. There’s a strong case to be made that Congress should terminate subsidies for fossil fuels and extend them for renewables, not the other way around.

A Century (or Two) of Subsidies

To promote domestic energy production, the federal government has been serving the oil and gas industry a smorgasbord of subsidies since the early days of the 20th Century. Companies can deduct the cost of drilling wells, for example, as well as the cost of exploring for and developing oil shale deposits. They even get a domestic manufacturing deduction, which is intended to keep U.S. industries from moving abroad, even though—by the very nature of their business—they can’t move overseas. All told, from 1918 through 2009, the industry’s tax breaks and other subsidies amounted to an average of $4.86 billion annually (in 2010 dollars), according to a 2011 study by DBL Investors, a venture capital firm. Accounting for inflation, that would be $5.53 billion a year today.

The DBL study didn’t include coal due to the lack of data for subsidies going back to the early 1800s, but the federal government has lavished considerably more on the coal industry than on renewables. In 2008 alone, coal received between $3.2 billion and $5.4 billion in subsidies, according to a 2011 Harvard Medical School study in the Annals of the New York Academy of Sciences.

Meanwhile, wind and other renewable energy technologies, DBL found, averaged only $370 million a year in subsidies between 1994 and 2009, the equivalent of $421 million a year today. The 2009 economic stimulus package did provide $21 billion for renewables, but that support barely began to level the playing field that has tilted in favor of oil and gas for 100 years and coal for more than 200.

A 2009 study by the Environmental Law Institute looked at U.S. energy subsidies since the turn of this century. It found that between 2002 and 2008, the federal government gave fossil fuels six times more than what it gave solar, wind and other renewables. Coal, natural gas and oil benefited from $72.5 billion in subsidies (in 2007 dollars) over that seven-year period, while “traditional” renewable energy sources—mainly wind and solar—received only $12.2 billion. A pie chart from the report shows that 71 percent of federal subsidies went to coal, natural gas and oil, 17 percent—$16.8 billion—went to corn ethanol, and the remaining 12 percent went to traditional renewables.

A new study by Oil Change International brings us up to date. Published earlier this month, it found that federal subsidies in 2015 and 2016 averaged $10.9 billion a year for the oil and gas industry and $3.8 billion for the coal industry. By contrast, the wind industry’s so-called production tax credit, renewed by Congress in December 2015, amounted to $3.3 billion last year, according to a Congress Joint Committee on Taxation (JCT) estimate. Unlike the fossil fuel industry’s permanent subsidies, Congress has allowed the wind tax credit to expire six times in the last 20 years, and it is now set to decline incrementally until ending in 2020. Similarly, Congress fixed the solar industry’s investment tax credit at 30 percent of a project’s cost through 2019, but reduced it to 10 percent for commercial projects and zeroed it out for residences by the end of 2021. The JCT estimates that the solar credit amounted to a $2.4-billion tax break last year. Totaling it up, fossil fuels—at $14.7 billion—still received two-and-a-half times more in federal support than solar and wind in 2016.

The Costs of Pollution

Subsidy numbers tell only part of the story. Besides a century or two of support, the federal government has allowed fossil fuel companies and electric utilities to “externalize” their costs of production and foist them on the public.

Although coal now only generates 30 percent of U.S. electricity, down from 50 percent in 2008, it is still responsible for two-thirds of the electric utility sector’s carbon emissions and is a leading source of toxic pollutants linked to cancer; cardiovascular, respiratory and neurological diseases; and premature death. The 2011 Harvard Medical School study cited above estimated coal’s “life cycle” cost to the country—including its impact on miners, public health, the environment and the climate—at $345 billion a year.

In July 2016, the federal government finally began regulating the more than 1,400 coal ash ponds across the country containing billions of gallons of heavy metals and other byproducts from burning coal. Coal ash, which has been leaching and spilling into local groundwater, wetlands, creeks and rivers, can cause cancer, heart and lung disease, birth defects and neurological damage in humans, and can devastate bird, fish and frog populations.

But that was last year. Since taking office, the Trump administration has been working overtime to bolster coal, which can no longer compete economically with natural gas or renewables. Earlier this year, it rescinded a rule that would have protected waterways from mining waste, and a few months ago it filed a repeal of another Obama-era measure that would have increased mineral royalties on federal lands. More recently, Energy Sec. Rick Perry asked the Federal Energy Regulatory Commission to ensure that coal plants can recover all of their costs, whether those plants are needed or not.

Like the coal industry, the oil and gas industry has friends in high places. Thanks to friendly lawmakers and administrations, natural gas developers are exempt from key provisions of seven major environmental laws that protect air and water from toxic chemicals. Permitting them to flout these critical safeguards forces taxpayers to shoulder the cost of monitoring, remediation and cleanup—if they happen at all.

The Benefits of Clean Energy

Unlike fossil fuels, wind and solar energy do not emit toxic pollutants or greenhouse gases. They also are not subject to price volatility: wind gusts and solar rays are free, so more renewables would help stabilize energy prices. And they are becoming less expensive, more productive, and more reliable every year. According to a recent U.S. Department of Energy (DOE) report, power from new wind farms last year cost a third of wind’s price in 2010 and was cheaper than electricity from natural gas plants.

Perhaps the biggest bonus of transitioning to a clean energy system, however, is the fact that the benefits of improved air quality and climate change mitigation far outweigh the cost of implementation, according to a January 2016 DOE study. Conducted by researchers at the DOE’s Lawrence Berkeley National Laboratory and National Renewable Energy Laboratory, the study assessed the impact of standards in 29 states and the District of Columbia that require utilities to increase their use of renewables by a certain percentage by a specific year. Called renewable electricity (or portfolio) standards, they range from California and New York’s ambitious goals of 50 percent by 2030 to Wisconsin’s modest target of 10 percent by 2015.

It turns out that it cost utilities nationwide approximately $1 billion a year between 2010 and 2013—generally the equivalent of less than 2 percent of average statewide retail electricity rates—to comply with the state standards. On the benefit side of the equation, however, standards-spawned renewable technologies in 2013 alone generated $7.4 billion in public health and other societal benefits by reducing carbon dioxide, sulfur dioxide, nitrogen oxide and particulate matter emissions. They also saved consumers as much as $1.2 billion by lowering wholesale electricity prices and as much as $3.7 billion by reducing natural gas prices, because more renewable energy on the grid cuts demand—and lowers the price—of natural gas and other power sources that have higher operating costs.

Take Fossil Fuels Off the Dole

If the initial rationale for subsidizing fossil fuels was to encourage their growth, that time has long since passed. The Center for American Progress (CAP), a liberal think tank, published a fact sheet in May 2016 identifying nine unnecessary oil and gas tax breaks that should be terminated. Repealing the subsidies, according to CAP, would save the U.S. Treasury a minimum of $37.7 billion over the next 10 years.

An August 2016 report for the Council on Foreign Relations by Gilbert Metcalf, an economics professor at Tufts University, concluded that eliminating the three major federal tax incentives for oil and gas production would have a relatively small impact on production and consumption. The three provisions—deductions for “intangible” drilling costs, deductions for oil and gas deposit depletion, and deductions for domestic manufacturing—account for 90 percent of the cost of the subsidies. Ending these tax breaks, Metcalf said, would save the Treasury roughly $4 billion a year and would not appreciably raise oil and gas prices.

At the same time, the relatively new, burgeoning clean energy sector deserves federal support as it gains a foothold in the marketplace. Steve Clemmer, energy research director at the Union of Concerned Scientists, made the case in testimony before a House subcommittee last March that Congress should preserve wind and solar tax incentives beyond 2020.

“Until we can transition to national policies that provide more stable, long-term support for clean, low-carbon energy,” he said, “Congress should extend federal tax credits by at least five more years to maintain the sustained orderly growth of the industry and provide more parity and predictability for renewables in the tax code.” Clemmer also recommended new tax credits for investments in low- and zero-carbon technologies and energy storage technologies.

Despite the steady barrage of through-the-looking-glass statements by Trump administration officials, scientific and economic facts still matter. Administrator Pruitt would do well to examine them. Congress should, too, when it considers its tax overhaul bill, which is now being drafted behind closed doors. If they did, perhaps they would recognize that—economically and environmentally—it would be far better for the future of the planet to phase out fossil fuel subsidies and provide more incentives for clean energy.