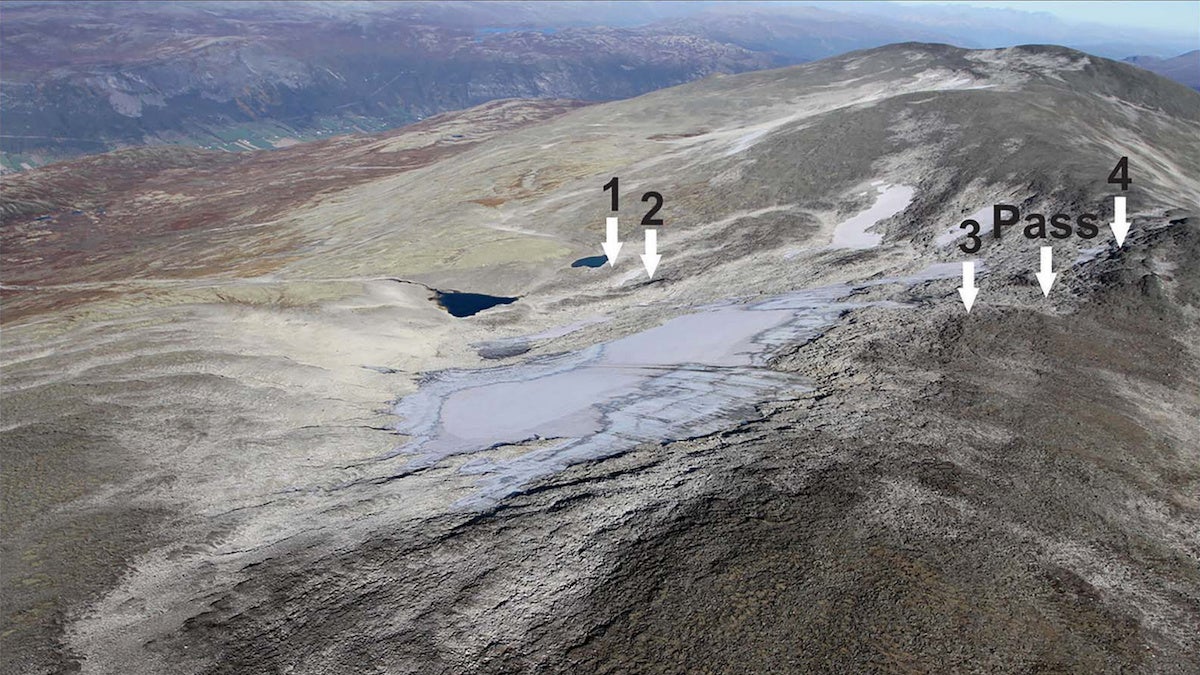 Aerial view of Lendbreen from the south-west. Light-grey areas (without lichen) have seen recent ice-melt. Arrows 1–3 indicate the locations of cairns visible on approach from Ottadalen. Arrow 4 indicates the location of a stone-built shelter. L. Pilø / CC BY 4.0

Global heating from the climate crisis is rapidly melting glaciers, revealing treasures underneath the ice from long ago. Retreating ice in Norway recently revealed a lost Viking mountain pass strewn with artifacts, according to a new study in the journal Antiquity.

The first discovery was an 1,800 year-old shirt, which spurred researchers to find what else was strewn around near the Lendbreen ice patch outside the alpine village of Lom, Norway. That led to an exploration that uncovered artifacts dating back to the late Roman Iron Age all the way to the Viking Age and the medieval period, as Scientific American reported.

When the researchers traipsed into the abandoned mountain pass that is rapidly melting due to warmer global temperatures, they found broken sleds, tools and other elements of daily life dating back nearly 2,000 years, as National Geographic reported.

“It dawned on us that we had found something really special,” said Lars Pilø, who leads the Glacier Archaeology Program in Oppland, Norway and is a co-author on the paper, according to National Geographic. “We sort of hit the motherlode.”

They found nearly 1,000 artifacts that run the gamut from 300 to 1500 AD, with the mountain pass falling out of use after the Black Death in the medieval period. The researchers used carbon dating to pinpoint when each finding is from. The bulk of what they collected comes from the period around 1000 AD at the height of the Viking era when trade and mobility in the region peaked, according to The Guardian.

“A lost mountain pass melting out of the ice is a dream discovery for us glacial archaeologists,” said Pilø in a statement, as CNN reported. “In such passes, past travelers left behind lots of artifacts, frozen in time by the ice. These incredibly well-preserved artifacts of organic materials have great historical value.”

While this is certainly a dream discovery for archaeologists, one of the study authors cautioned that it is also a “poignant and evocative reminder of climate change,” according to James Barrett, a medieval and environmental archaeologist at the University of Cambridge, who has been working with Norwegian archaeologists on the project since 2011, as The Guardian reported.

“Global warming is leading to the melting of mountain ice worldwide, and the finds melting out of the ice are a result of this,” said Pilø to Gizmodo. “Trying to save the remains of a melting world is a very exciting job — the finds are just an archaeologist’s dream — but at the same time, it is also a job you cannot do without a deep sense of foreboding.”

The large-scale melting in 2019 of most of the Lendbreen ice means there will soon be nothing left to discover, said Barrett. “On the other hand, there are a lot of ice patches in the high elevations in [this part of Norway], so there will always be another — for the time being,” he said, as The Guardian reported.

Combing through the rapidly depleting glacier, the archaeologists found horse snowshoes, the buried remains of packhorses and their associated dung piles, parts of sleds, a walking stick adorned with a runic inscription, a knife with well-preserved wooden handle, and a wood distaff used to hold wool during hand-spinning. They also dug up mittens, shoes and the remains of clothing, including a complete tunic from the Roman Iron Age. Some items defied description since there was nothing to compare them to, according to CNN. 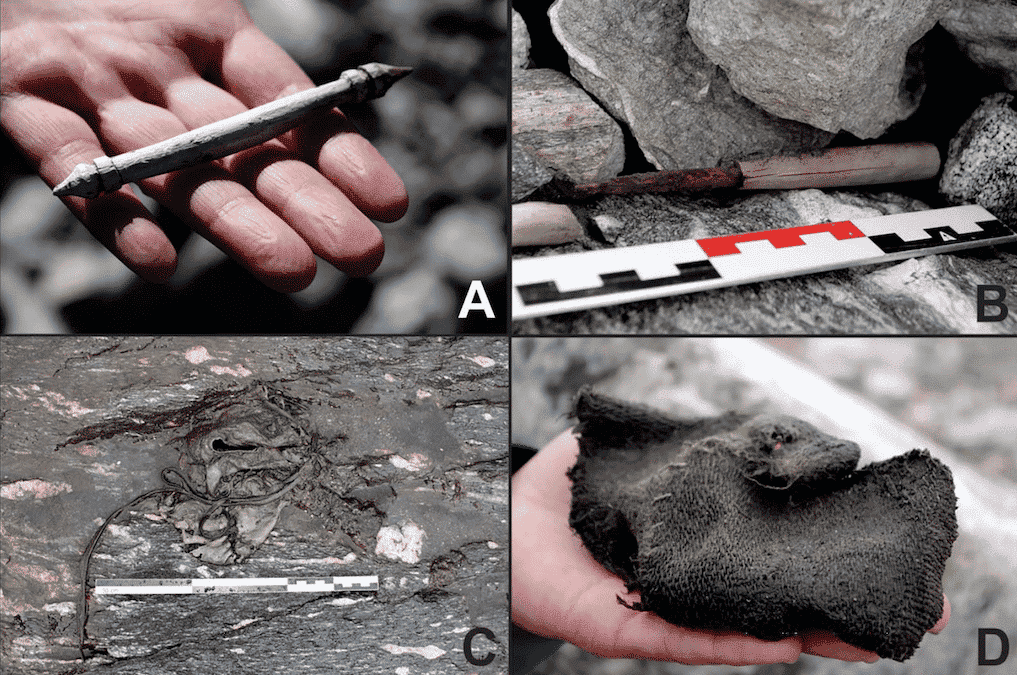 “These finds tell us a rich history of the local farming community of which there are otherwise only meager sources,” said Pilø, as Gizmodo reported.

“The preservation of the objects emerging from the ice is just stunning,” said Espen Finstad, study co-author and co-director of the Glacier Archaeology Program, in a statement, as CNN reported. “It is like they were lost a short time ago, not centuries or millennia ago.”