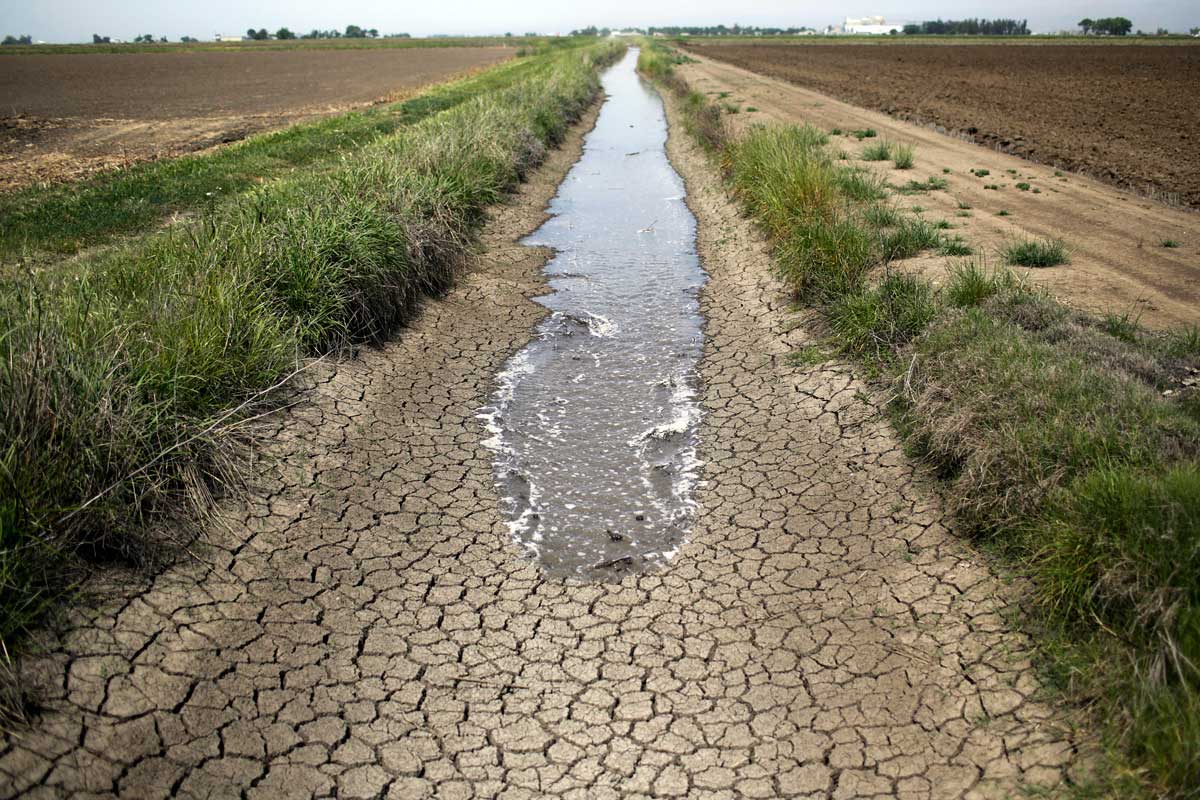 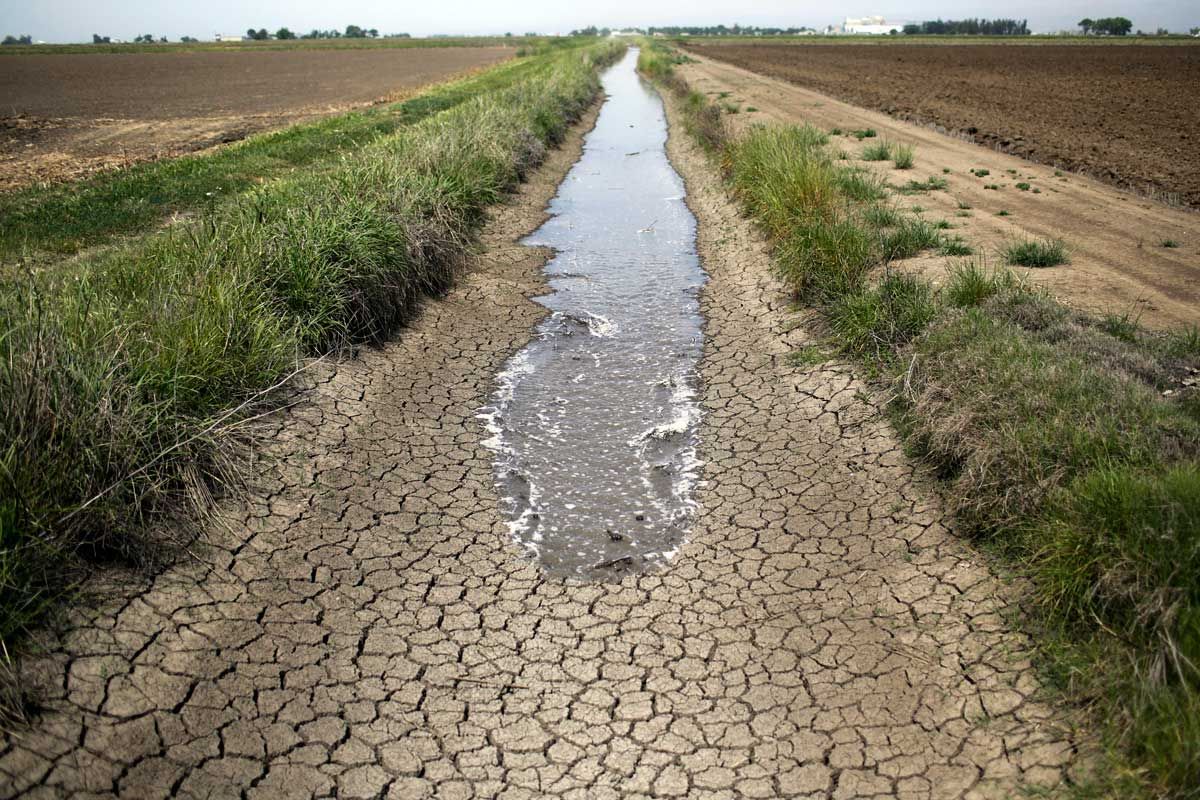 Historically, the Colorado emptied into the Gulf of California. Today, what little remains of the Colorado River when it reaches Mexico has been diverted to irrigate the farms of Mexicali Valley. The rest of the river exists mostly as a dry memory.ProPublica

“Historically, megadroughts were extremely rare phenomena occurring only once or twice per millennium,” the report states. “According to our analysis of modeled responses to increased GHGs, these events could become commonplace if climate change goes unabated.”

Rising temperatures will combine with decreased rainfall in the Southwest to create droughts that will be worse than the historic “Dust Bowl” of the 20th century and last far longer. The Dust Bowl lasted no longer than eight years, and affected 100 million acres around the Texas and Oklahoma panhandles and adjacent lands in Kansas, Colorado and New Mexico. Dust storms swept through large swaths of former farmland, depositing dust as far east as Chicago, New York and Washington. It is estimated that more than half a million people were made homeless, and some 3.5 million Dust Bowl refugees migrated west, in hopes of finding work. 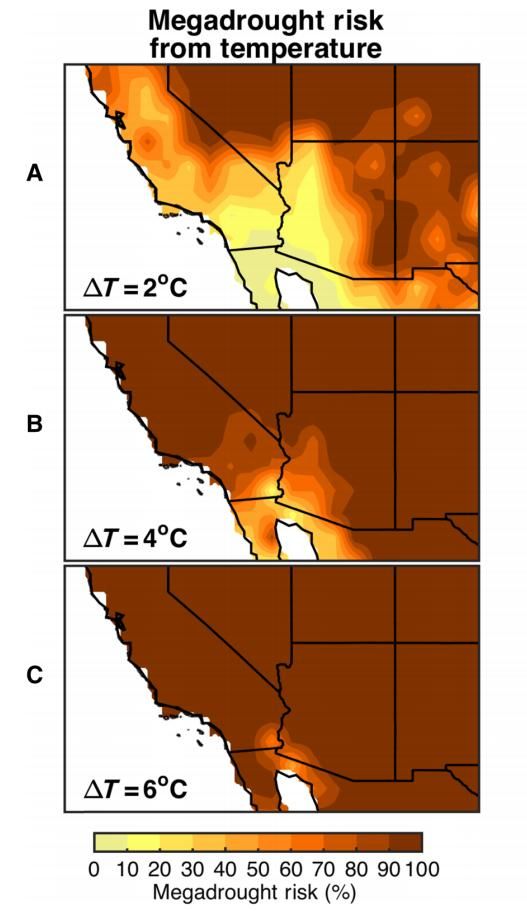 The megadrought study looked at conditions under a 2-degree Celsius level of global warming, 4 degrees and 6 degrees. With 4 degrees of warming, which is the rate the planet is currently heading for, megadroughts are almost a certainty. If the rise in global temperatures is kept to 2 degrees, which is the upper-limit goal of the Paris climate agreement, the risk of megadroughts is between 30 and 60 percent.

Much of the Southwest relies on the Colorado River and its tributaries for some or all of its water. Beginning as a trickle seeping out of the ground above 10,000 feet, just west of the Continental Divide, the Colorado feeds critical farmland, public water supplies and helps generate hydroelectric power. Thirty to 40 million people rely on Colorado River water.

Historically, the Colorado emptied into the Gulf of California. Today, what little remains of the Colorado River when it reaches Mexico has been diverted to irrigate the farms of Mexicali Valley. The rest of the river exists mostly as a dry memory.

“The Colorado River is one of the most dammed and diverted rivers on the planet,” said Gary Wockner, executive director of Save The Colorado, in an interview with EcoWatch. “In fact, every drop of its water, over 5 trillion gallons of water per year, is diverted out and the river no longer meets the Gulf of California.” 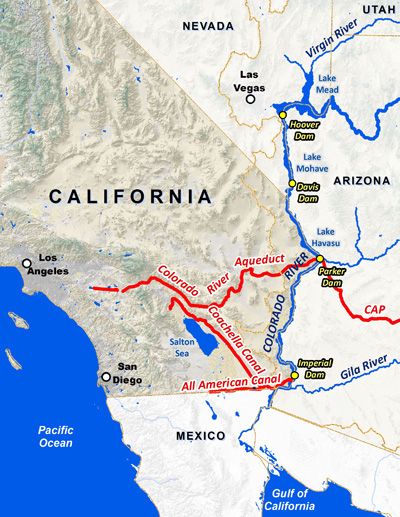 Under the 4-degree scenario plotted by the study, all but the extreme southeast corner of California is at a 90 to 100 percent risk of megadrought. The Colorado River supplies 55 to 65 percent of water for Southern California. ProPublica reported last year that more people are entitled to Colorado River water than the river can supply—or has supplied, on average, for the past 110 years.

“Much of the water is lost, overused or wasted, stressing both the Colorado system, and trickling down to California, which depends on the Colorado for a big chunk of its own supply,” ProPublica reported.

In California’s San Joaquin Valley, over-pumping of groundwater for irrigation has caused the land to sink—in some places, as much as two to three feet. A NASA study, conducted last year, showed the extent of the problem.

One spot near the California Aqueduct sank eight inches in just four months. Toxic algal blooms have affected more than 40 lakes and waterways this year, the greatest number on record. A shift in electric power generation in the state away from dwindling hydropower sources to natural gas has cost Californians $2 billion and increased carbon dioxide emissions from power plants by 10 percent.

“A megadrought occurring again in the Southwest in the coming decades would impose unprecedented stresses on water resources of the region, and recent studies have shown that they are far more likely to occur this century because of climate change compared to past centuries,” stated the authors of the megadrought study. They call for a mix of adaptation policies, including reducing demand, greater water efficiency, and shifts to groundwater supplies, as well as further reductions in greenhouse gas emissions.

“The implications are that the river is already severely depleted and the reservoirs are at near historic lows and all the predictions are that it is going to get worse,” said Wockner. “And so people who manage water supplies need to be managing for less water.”