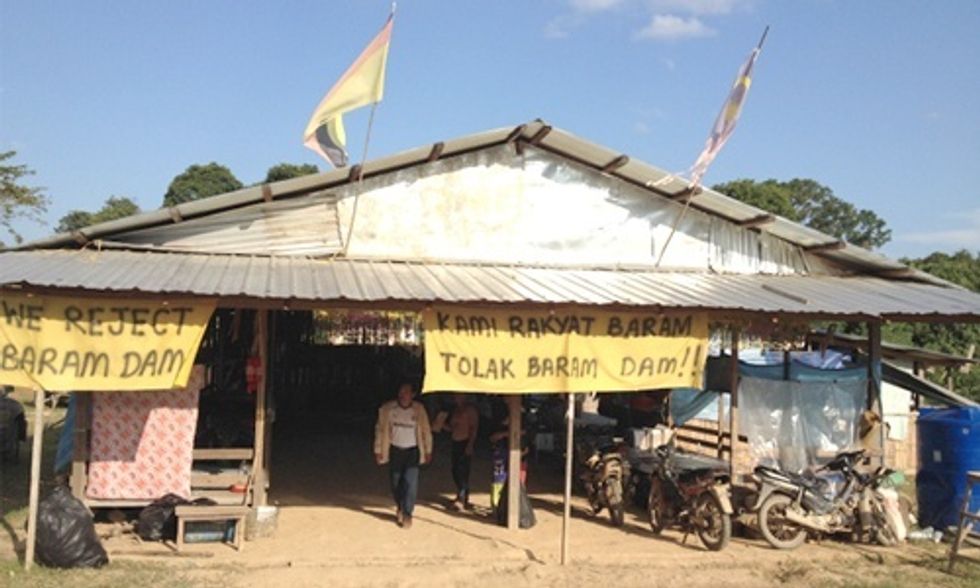 On a 20-minute walk through the rainforest of Borneo, you will encounter more tree species than exist on the entire North American continent. The distinctive biodiversity of the area attracts tourists and researchers from all over the world, in spite of the intense destruction of the rainforest from logging and palm oil plantations in the past few decades. Now, there’s a new threat to the people and the wildlife of Borneo: mega-dams.

The Baram Dam blockade on the road to the dam site. Photo credit: Jettie Word

In the Malaysian state of Sarawak in the north of the island, mega-hydro projects are driven by the state government through the Sarawak Corridor of Renewable Energy, or SCORE. If built, these dams will force tens of thousands of people from their land, drive untold species to extinction, pollute the rivers—the lifelines of the jungle—and produce more greenhouse gas emissions per megawatt of energy than a coal-fired power plant.

The government of Sarawak has already built two dams in the proposed SCORE portfolio, but local resistance has stalled progress on the next dams scheduled to flood the forest. Since October 2013, indigenous communities in Malaysian Borneo have prevented construction of the Baram mega-dam, which would forcefully displace thousands of families. As part of the campaign to stop the Sarawak dams, The Borneo Project, a U.S.-based nongovernmental organization, has released Commerce or Corruption?, the second film in a series of short documentaries exposing the realities of proposed mega-dam construction in Sarawak. The film release coincides with the 555th day of the Baram Dam blockades.

The damage inflicted by these dams would be massive, and the benefits are still unclear. Given that there is no sound reason to build these dams, the question becomes, why are these dams being built, and why now?

Commerce or Corruption? exposes the government’s true motivation behind the dams: personal financial gain. Private companies involved in construction and transmission stand to make gigantic profits from building the dams. Many of these companies are controlled by relatives and friends of the governor of the state, Taib Mahmud. Mahmud has been in power since the 1970s. Doling out the contracts would add even more gold to the already over-flowing coffers of politicians and their well-connected family members.

The lack of transparency behind the financing and the plans for how to use the energy is also cause for concern. The Sarawak mega-dams assume an outrageous energy demand growth rate, but the state currently produces significantly more energy than it can use, and proponents have no concrete plans for how to use or sell the energy.

Trees near the Bakun Dam burn from the methane and other gases produced by the reservoir. Photo credit: Joe Lamb

The indigenous communities protesting the dams are fighting for their livelihoods. Completed in 2011, the Bakun dam created a reservoir the size of Singapore, and cost the government $5 billion, over five times the original $8 million estimate. To make way for the reservoir, around 10,000 indigenous people were resettled in the town of Asap. After more than a decade in their new location, the communities are still struggling to eke out a living. They no longer have access to the hunting and fishing grounds of their former villages. The government promised 10 acres of farmland per family, but reduced it to three. Three acres is not enough to sustain a living, and much of the land is rocky, sloped, sandy and located several hours away from the town. To make matters worse, many families are in debt because the government made them pay for their own housing.

The good news is that community resistance is proving to have a significant effect on developments. If completed, the Baram Dam will inundate 26 villages and displace between 6,000 and 20,000 people. The ongoing Baram Dam blockades—community-led nonviolent direct actions—involve men, women and children and have successfully prevented loggers and the dam developer, Sarawak Energy Bhd, from accessing the construction area for 555 days. The blockade is maintained by indigenous Kenyah, Kayan and Penan people and demonstrates the tremendous local resistance to dam development and logging.