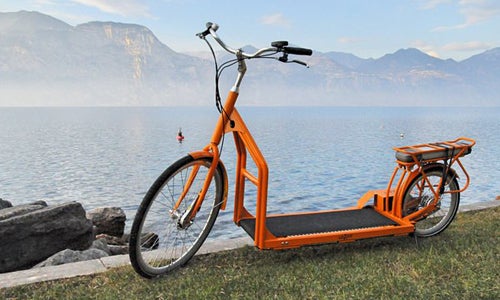 Meet the Lopifit—a half bike, half treadmill that brings the world of cycling and walking together.

The scooter-like contraption—the first of its kind in the world—was invented by Bruin Bergmeester, who of course hails from the bike-friendly Netherlands.

“When I was talking on my treadmill in my fitness room one day I thought, ‘Why not bring the treadmill outdoors?'” he recalled to the Epoch Times.

Bergmeester and his wife built the first five Lopifit bikes in their living room, InsideEVs reported.

With six gears and an Quantum Motor that gives the bike a range of 34 miles on a single charge, the Lopifit is another reason to leave your car at home.

“The Lopifit is a totally new way of moving,” the company boasts on its website. “With the electric assist, it takes no more effort to walk than ‘a walk in the park.'”

Not only is riding a Lopifit faster than walking, as Lopifit marketing manager Rob van Ooijen says in the video below, “You go 25 kilometers (15 miles) an hour so you get more distance with a Lopifit.”

“And it’s more interesting than normal walking,” he added.

To get moving on the Lopifit, all you have to do is walk at a normal pace to push the treadmill belt backwards. An onboard sensor registers the movement and activates the motor to propel the bike.

As for the specs, the Lopifit’s frame is made of steel and comes with LED lighting and a luggage carrier. The bike is 2.3 meters (7.5 feet) in total length with a 28-inch front wheel and a 20-inch rear wheel.

While the bike first debuted in 2014, it really took off in February 2015 after professional skateboarder Bam Margera posted a video of the Lopifit on his Facebook page.

The video went viral, clocking up more than 84 million times to date. The TV personality captioned alongside the video, “Walking Bike—Buy me one!”