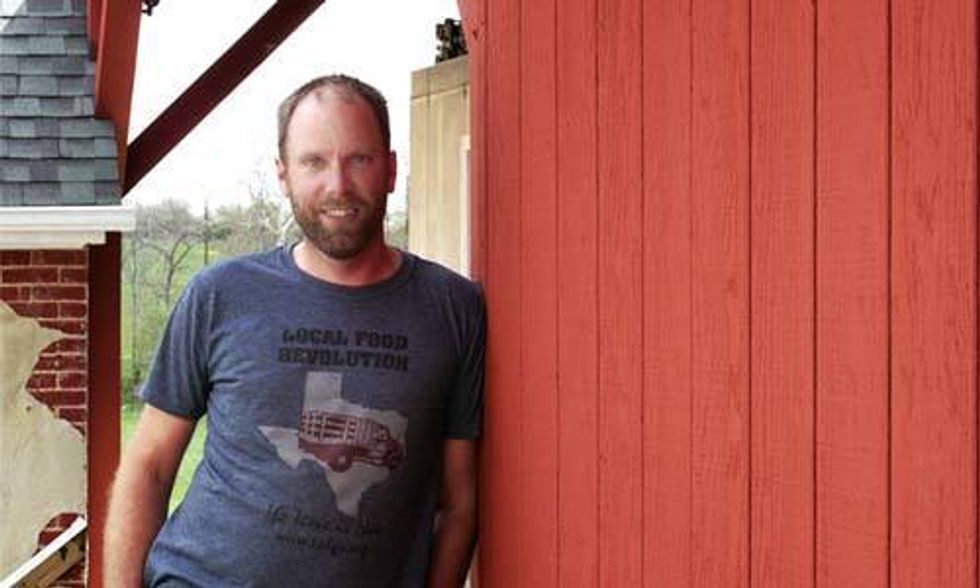 Forrest Pritchard is a seventh generation farmer in Virginia who operates a successful diversified livestock farm with cattle, sheep, pigs and poultry. All livestock is either grass-fed or free range. His 500-acre farm, Smith Meadows, is not certified organic though Pritchard follows organic practices. Pritchard sells his meat products at six farmers markets in the Washington, DC, area.

Pritchard is also an author. His first book, Gaining Ground, details his adventures in building his family's failing farm back into a successful business. The book became a New York Times bestseller. His most recent book is Growing Tomorrow: A Farm-to-Table Journey in Photos and Recipes. Pritchard, along with photographer Molly M. Peterson, traveled throughout the U.S. interviewing 18 visionary sustainable farmers.

The book is also a call to action. Pritchard hopes to inspire the movement towards eating local and sustainably grown foods, visiting farmers markets, subscribing to Community Supported Agriculture (CSA) programs and growing one's own vegetables.

Q. How did you get started in farming?

A. I started farming in 1996 after finishing college. I wanted to make the farm economically viable. My grandfather farmed conventionally. I grew up in that heritage and thought because he was able to do it that I could do it, too.

That first year I worked with a neighbor, who was an experienced farmer and we grew 200 acres of corn and soybeans. We thought we could make a profit of $10,000. It was the first year that GMO [genetically modified organism] seed was available and I grew Roundup Ready soybeans.

We made a profit of a little less than $20 even though we had tractor trailer loads of harvested grain. It was devastating to me and the fields were dead. It was a soulless experience for me.

Then I started looking into selling to farmers markets, which seemed to make sense. The farm-to-table movement was just starting. We started selling small numbers of free range eggs and grass-fed beef to farmers markets in 1997. We grossed $6,000 that year.

Ninety-five percent of our business is farmers markets. We sell at three markets on Saturday and three on Sunday in the Washington, DC, area year-round.

A. We've never been certified, but we run an organic regimen with no pesticides. The feed we source is non-GMO for pigs and chickens. We work directly with customers at farmers markets, so we haven't needed independent accreditation.

A. The number of farmers markets has grown from 1,500 in 1995 to more than 9,000 in 2015. This is absolutely wonderful and a heck of an opportunity for young people or someone who wants to convert their farm.

Farmers markets are an ancient part of our society, dating back thousands of years. Ever since we've had cities, we've had farmers markets. There's always been a desire to connect with the freshest, tastiest, most nutritious food. It's ingrained in us. We all want the same thing: superior food, with an honest, authentic story.

Q. Do you see more interest in farming among young people?

A. There is huge interest among young people nationwide who want to grow food and opt out of the cubicle/internet lifestyle. But young people who want to do this are at a disadvantage because they don't have good access to land. Land around urban areas is expensive and used for development.

On the other end, the average age of farmers is 59 and what's the motivating factor for them to switch [to organic]? We're at a huge crossroads.

Fortunately, there are increasing opportunities to connect older farmers with younger farmers who are graduating from sustainable agriculture programs in the U.S. Older farmers want to see land remain in farming and some are giving long-term leases to younger farmers to help them get started. This is happening around the country.

For a young person starting out in farming, I'd say, "Absolutely, go for it, there are 300 million Americans and they all need to eat."

Q. What are your thoughts on GMOs?

A. Despite whatever personal opinions you may hold about the safety, benefits or labeling of GMO foods, one fact remains inarguable: In order for these crops to grow, it requires death on a massive scale. The genetic engineering creates immunity to herbicides such as glyphosate, which eliminates weeds. The GMO crops such as corn, soybeans and canola don't die, but everything else does.

That's the crucible. There is nothing natural about some event coming through and killing something. It's destructive. We are hemorrhaging carbon. We can't see it leaving our dead soils. On the back end, we are destroying beneficial fungi and bacteria every time chemicals are poured on them.

We know that a huge part of soil health is bacteria. Glyphosate has negative impacts on bacteria. Bacteria are the building blocks of soil. Using glyphosate is basically like yanking a bunch of bricks out of the side of our house.

What's the deal with killing hundreds of millions of acres of soil? What's the deal with companies having patents on crops and farmers not being able to have the historical ability to save seed? Some things are supposed to be above private property and should belong to the world.

There are viable alternatives to creating food by being more sustainable in multiple ways and without paying the seed and chemical companies for the privilege of their one-stop solution.

A. If we spent a fraction of the funding on organics that we spend on industrial farming, it would be a 50-50 ballgame. As Americans, we enjoy a fair fight, healthy competition and good sportsmanship. But in our agricultural landscape the food scoreboard reads 96 industrial farming to four organic. I would say that when any industry gets into the 96th percentile, they will do all they can to hold on to that position whether it's good for society or not.

What's wrong with promoting a 50-50 balance in the system? Balance is resilience and innovation. Perhaps it's time we all demanded a more balanced food system.