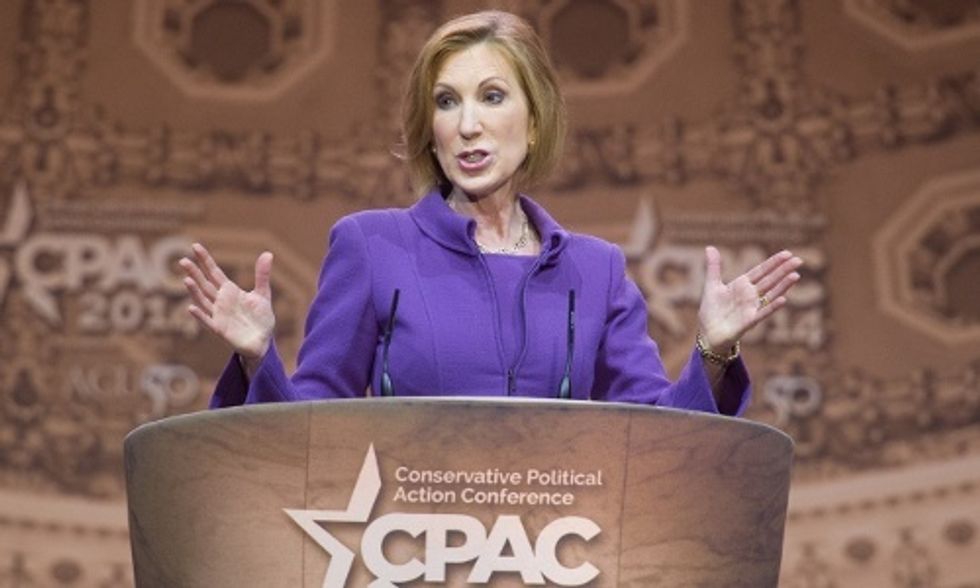 It's a new week so that means we get a new crop of Republican presidential hopefuls. With Senators Ted Cruz, Rand Paul and Marco Rubio having officially launched their campaigns and at least a dozen more potential candidates popping up in early-primary states, it's time this week for the long shots to get on the playing field.

Monday former Hewlett-Packard CEO and failed California Senate candidate Carly Fiorina and retired neurosurgeon Ben Carson announced their runs. Today former Arkansas Gov. Mike Huckabee joins them. Each of these fringe candidates brings primarily oppositional assets to the field. Fiorina and Carson allow the GOP to claim they are neither sexist nor racist by pointing to their token woman and African-American. Huckabee has boasted about his ability to go after Hillary Clinton given his shared status with Bill Clinton as a former Arkansas governor. Although it's unlikely any of these candidates will be on the ticket—or even in the race by the end of the year—they're doing their best to conform to the attitudes of the increasingly rightwing GOP primary voters on many issues, including climate change. In fact, the positions of these three candidates on climate are so muddled it's hard to figure out where they stand. And perhaps that's intentional.

Fiorina has never held elected office and her high-profile tenure as CEO of Hewlett-Packard was contentious. She ran against California Sen. Barbara Boxer in 2010 and lost by 10 points in a campaign she self-funded. And she's a sort-of climate denier who sees environmental activists as America's enemy.

In an editorial in the Washington Post last year, "Companies shouldn't cave in to the demands of climate change activists," Fiorina portrayed rightwing lobby group the American Legislative Exchange Council (ALEC), which is lavishly funded by deep-pockets fossil fuel interests such as the Koch brothers, as the poor, defenseless victim of environmental bullies. ALEC, she said "has been under siege by an army of professional activists." She attacked the public pressure campaigns that caused Google to drop its membership in ALEC and LEGO to end its relationship with Shell, claiming these were attacks on "protected speech."

She went on to say, "When discussing climate, scientists may agree that some policy change is warranted, but they also agree that action by a single state or nation will make little difference. At a time when American families are still recovering from joblessness and the recession, should the United States commit to an energy policy that puts U.S. jobs, and the economy, at risk?"

She promoted the idea that global temperature increase projections were overstated and that the idea of switching from "traditional" energy sources to renewable ones was "simplistic."

Fiorina doubled down on her climate denial last month as she inched closer to announcing her presidential run. In an MSNBC interview, she restated her idea that there's no point in doing anything  because it will make no difference and expressed opposition to California's climate regulations, saying, "California can be the most onerous regulatory regime in the world, which they are, and it won’t make a bit of difference in climate change."

She also blamed the drought in California on "liberal environmentalists," saying they "prevented the building of a single new reservoir or a single new water conveyance system over decades during a period in which California’s population has doubled." She called it a "classic case of liberals being willing to sacrifice other people’s lives and livelihoods at the altar of their ideology." She didn't explain where the water for the reservoirs or conveyance systems was going to come from.

While his record shows that Ben Carson was a brilliant, widely respected doctor, he's expressed some of the most radical and reality-defying positions on issues of any candidate—virtually a requirement for an African-American in the Republican party. He doesn't believe in evolution, thinks being gay is a choice and has called the Affordable Care Act "the worst thing that has happened in this nation since slavery."

On climate, Carson has mostly dodged the issue. "We may be warming, we may be cooling," he said. "There's always going to be warming or cooling going on." But he's also said, "Our Environmental Protection Agency (EPA) should be told to work in conjunction with business, industry and universities to find the most eco-friendly ways of developing our energy resources." That separates him from some Republicans who think the EPA should be rendered entirely impotent or even eliminated. On the other hand, he says the Keystone XL pipeline "is perfectly safe, so I can't really see a good reason not to do it."

GOP primary voters don't like cap and trade so Mike Huckabee wants you to forget he ever supported it.
Photo credit: Shutterstock

Mike Huckabee, an evangelical pastor, was the most religiously radical candidate during his first presidential run in 2008, although eight years later, his views barely distinguish him from the rest of the field. He declared his candidacy today in Bill Clinton's hometown of Hope, Arkansas, highlighting his claim that he is best equipped to fight what he calls the "Clinton machine."

In a speech in January, Huckabee belittled the idea that climate change was a threat, saying that middle eastern radicals ISIS pose a greater threat to Americans, although they pose no threat on U.S. soil at all. He referred to President Obama's remark in his State of the Union Address that the greatest threat the U.S. faces in climate change," saying, "Not to diminish anything about the climate at all, but Mr. President, I believe that most of us would think that a beheading is a far greater threat to an American than a sunburn." In other words, he diminished climate change to a triviality.

But Huckabee's wavering positions on climate change are interesting in that they track the Republican Party's rightward move in the last decade. At a conference in 2007, Huckabee said, "One thing that all of us have a responsibility to do is recognize that climate change is here, it's real. That what we have to do is quit pointing fingers as to who's at fault and recognize that it's all our fault and it's all our responsibility to fix it. I also support cap and trade of carbon emissions. And I was disappointed that the Senate rejected a carbon counting system to measure the sources of emissions, because that would have been the first and the most important step toward implementing true cap and trade."

That wasn't his position just a few years later. In 2010, he denied he had ever supported cap and trade, even though it's on video. According to NPR, Huckabee wrote a Facebook post in 2013 claiming that climate change predictions had proved inaccurate. That post has now disappeared.