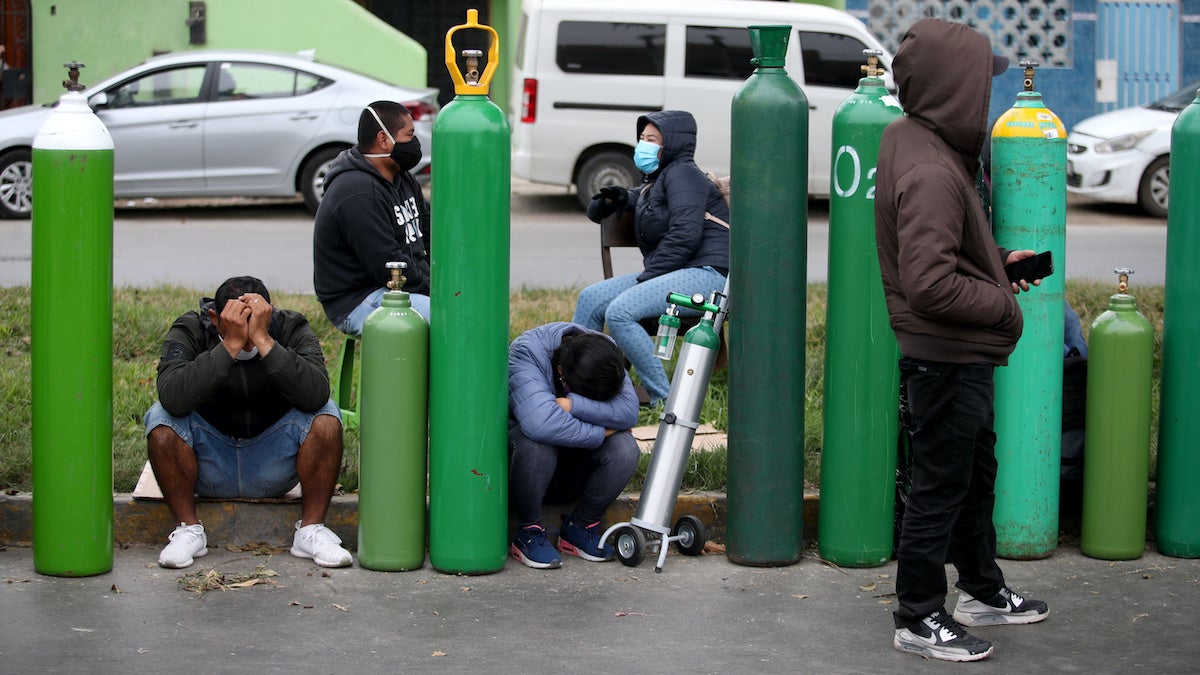 People wearing protective masks wait in a long queue to refill medical oxygen tanks at Criogas company on June 8, 2020 in Lima, Peru. Due to increased demand, oxygen is in short supply and Peruvians struggle to buy it at higher prices. Raul Sifuentes / Getty Images

At the onset of the global pandemic, wealthy countries were concerned with their lack of preparedness for a surge in patients entering hospitals with an infectious disease. The industrialized nations bought up the world’s supply of masks, gowns and ventilators, leaving poorer countries in dangerously short supply, as EcoWatch reported at the time.

Now that the coronavirus is spreading rapidly through Africa, South Asia and Latin America, the shortage of medical equipment in developing countries is causing a desperate scramble for a simple life saving treatment: oxygen.

Many severe COVID patients struggle with hypoxia — radically low blood-oxygen levels — as the primary danger. Only pure oxygen in large quantities buys the time they need to recover, as was the case with Prime Minister Boris Johnson of the UK who credited the “liters and liters of oxygen” he received for saving his life. Oxygen is also used for the treatment of respiratory diseases such as pneumonia, the single largest cause of death in children worldwide, according to The Associated Press.

As EcoWatch previously noted, the entire continent of Africa, for example, has fewer than 2,000 working ventilators in public hospitals across 41 African countries, the World Health Organization says, compared with more than 170,000 in the U.S.

In Congo, only 2 percent of health care facilities have oxygen; in Tanzania, it’s 8 percent, and in Bangladesh, 7 percent, according to limited surveys for USAID, as The Associated Press reported.

The rising demand for oxygen is bringing out a stark global truth: even the right to breathe depends on money, according to The Associated Press. In much of the world, oxygen is expensive and hard to get, but in Europe and North America, hospitals treat oxygen as a fundamental need, like water and electricity. It is delivered in liquid form by tanker truck and piped directly to the beds of coronavirus patients. Running short of a resource that can be pulled from the air is unfathomable.

By contrast, in Guinea, a secondhand pickup truck carries cylinders over shoddy roads from the country’s one source of medical-grade oxygen, a factory from the 1950s. Outside the capital, doctors say there is no oxygen to be found at all, which leaves people literally gasping for air, according to The Associated Press.

In Peru, where the healthcare system is woefully underfunded, oxygen on the black market has a 1,000 percent markup, making it entirely unaffordable for families that desperately need it to save their loved ones, according to The Washington Post.

And yet, there’s no way to know if the oxygen is legitimate. Peru is rampant with counterfeit medical equipment and treatments for the coronavirus. A scarcity of parts and maintenance means several hospitals’ oxygen plants have been out of service for years. Health Minister Víctor Zamora says Peru now faces a daily shortfall of 180 tons of oxygen. He has unveiled a million package to import oxygen and build new plants, and is calling on the country’s Congress to criminalize hoarding and speculation on medical supplies.

“Until that happens, we don’t have a way to intervene,” said Zamora to The Washington Post. “The only tool we have right now is our purchasing power. Only when we buy more and become more effective in distributing this essential medicine are we going to reduce this practice.”

The World Health Organization has ramped up its efforts to supply oxygen to the neediest countries, hoping to raise 0 million to increase oxygen delivery. The World Bank and the African Union are contributing to the effort, and some medical charities are seeking donations for the cause, according to The New York Times.

“Oxygen is one of the most important interventions, (but) it’s in very short supply,” said Dr. Tom Frieden, former director of the Centers for Disease Control and Prevention in the U.S. and current CEO of Resolve to Save Lives, as The Associated Press reported.