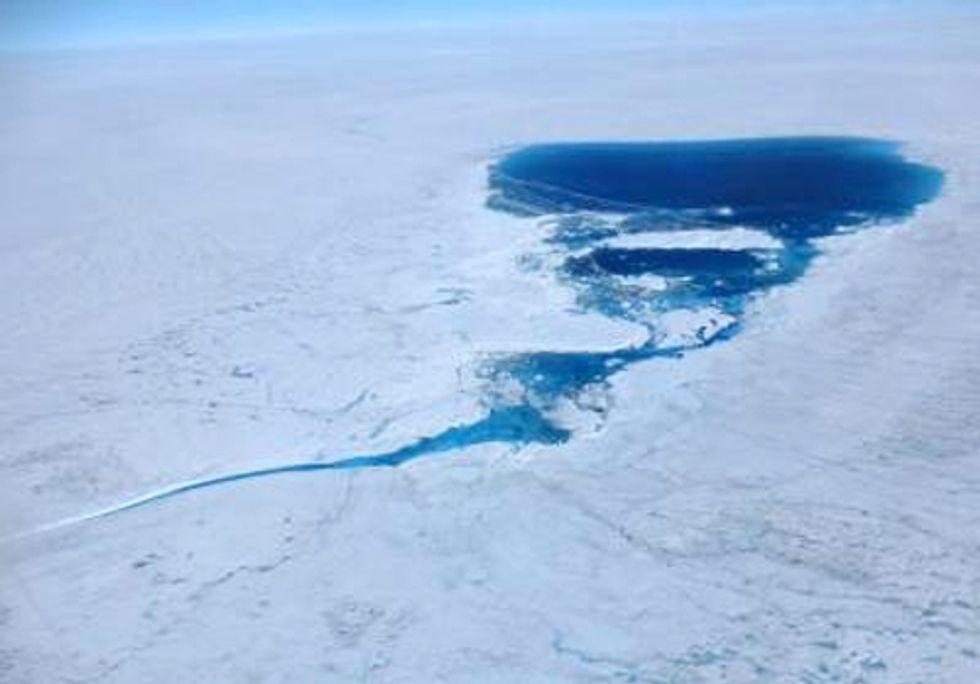 A supraglacial lake over the Greenland ice sheet in the Kangerlussuaq area at 1500 m elevation photographed on July 21, 2012. The lake feeds a stream that will deliver meltwater to the low elevations where it will either flow to the ocean on the surface or it will dive into the ice to contribute to the development of the englacial hydrological system. Photo by Marco Tedesco.

On Wednesday, scientists announced that melting over the Greenland ice sheet has already "shattered the seasonal record" set in 2010, with four weeks left before the end of the melting season. Scientists say this record melting is driven by rising Arctic temperatures and could have serious consequences for the environment and coastal communities. But the major media outlets are once again failing to report on clear evidence that our climate is changing.

Professor Marco Tedesco, whose research was sponsored by NASA and the National Science Foundation, examined satellite data from the National Snow and Ice Data Center and found that Greenland has "experienced extreme melting in nearly every region" this year. He concluded: "With more yet to come in August, this year's overall melting will fall way above the old records. That's a goliath year—the greatest melt since satellite recording began in 1979."

Tedesco looked at the extent and duration of melting to determine the "cumulative melting index," which measures the "strength" of the melting season. The following chart illustrates that by early August, Greenland's melting index was already higher than at any time in the past 30 years:

Tedesco attributed his findings to rising temperatures in the Arctic, noting that accelerated melting and ice sheet thinning are consistent with models of the effects of climate change. But, he added, "the difference is how quickly this seems to be happening."

This study comes on the heels of a NASA report that found a record 97 percent of Greenland's ice sheet experienced some surface melting in July. Earlier that month, an iceberg twice the size of Manhattan broke off Greenland's Petermann Glacier, an event that University of Delaware professor Andreas Muenchow called "one of the manifestations that Greenland is changing very fast."

These developments are concerning not only because they signify a warming climate, but because they further accelerate global sea level rise, which threatens coastal ecosystems and populations. Last year NASA reported that "the Greenland and Antarctic ice sheets are losing mass at an accelerating pace" and "overtaking ice loss from Earth's mountain glaciers and ice caps to become the dominant contributor to global sea level rise, much sooner than model forecasts have predicted."

I absolutely think the media should cover this more, along with the record-breaking pace of Arctic sea ice loss for the summer. This year is a significant step upward in impacts from climate warming seen in the far North - these are not one-offs, but record events topping two decades of generally increasing effects.

I think the science community 'gets' that the bandwidth of the American (and global) public is pretty packed right now: economy, deficit, and election; and for some the climate discussion must seem old. But these events need to get on people's radar. Our planet is trying to get our attention.

*Results are based on a search of Nexis, Factiva and an internal video archive for "Greenland" and "Tedesco" between Aug. 14 and Aug. 17, 2012.