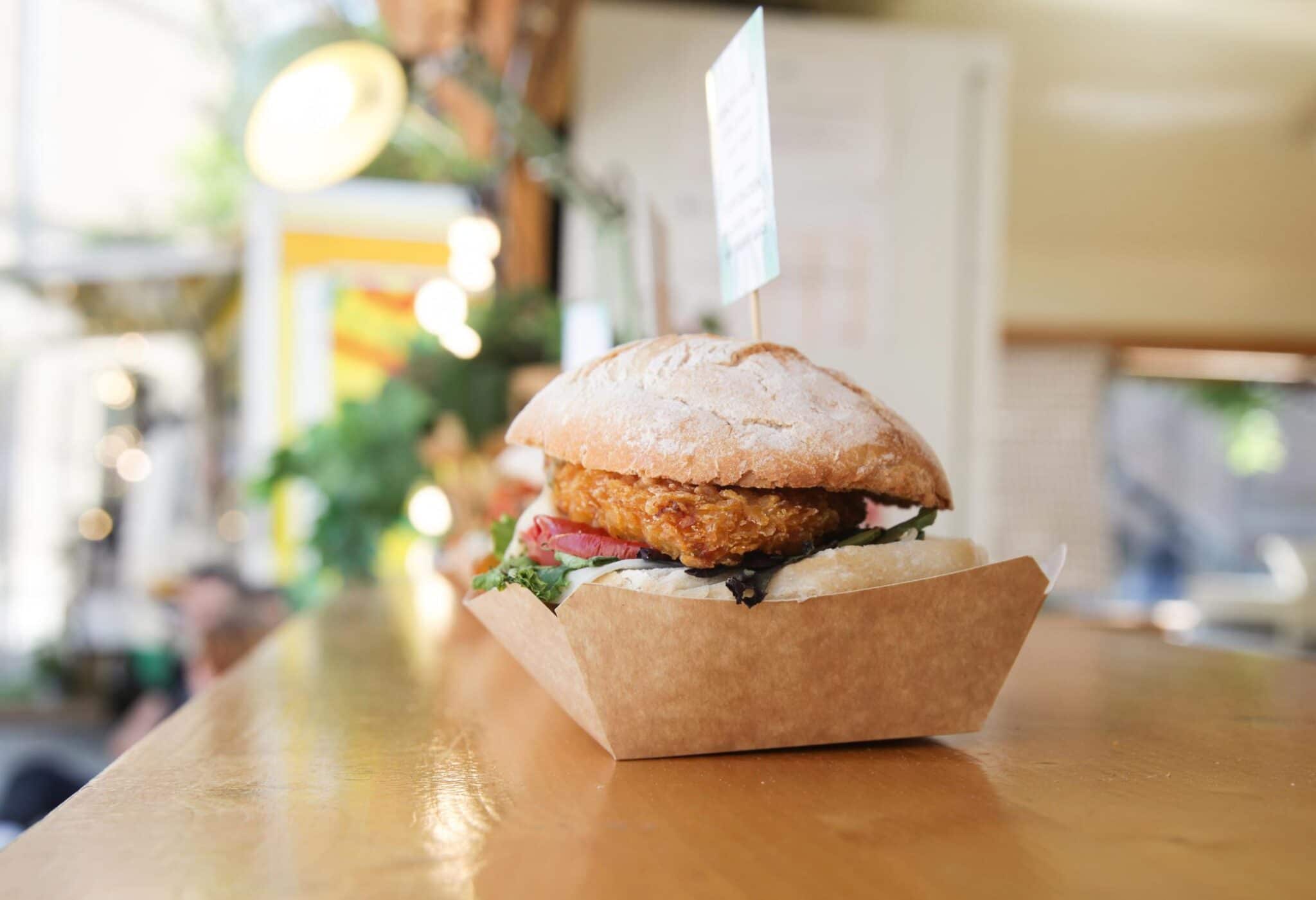 The demand for plant-based meat alternatives has soared as concerns for animal welfare, biodiversity and environmental impact moved to the forefront of global news in the last few decades.

Bloomberg reports that a first-time global decline in demand for meat occurred in 2019, according to calculations by the UN’s Food and Agriculture Organization. Some areas of the world increased meat consumption, such as China’s consumption of pork, but overall, the end of the line for meat preference may soon be here. A.T. Kearney, a global consultancy firm, has predicted that lab-grown and plant-based meat will overtake the market by 2040.

Many meat substitutes are available today. Here’s everything you need to know about meat alternatives from the ancient (tofu) to the more modern (soy-based crumbles).

Tofu is a soy-based protein, also known as bean curd, likely invented by the Han Dynasty (206 BC-220 AD). Benjamin Franklin wrote about tofu in a 1770 letter he mailed to Philadelphia from London. He also sent samples with his letter, but it wasn’t until the 1950s that tofu could be found in American grocery stores in its familiar water-filled containers.

Soy protein is a complete protein since it contains all nine essential amino acids the body needs to function. It’s an excellent source of fiber, vitamins and minerals without the cholesterol meat contains. One half cup provides 20% of the protein (10 grams) and nearly half the calcium you need daily, according to Harvard Health. The institute reports that soy protein provides either beneficial or neutral effects to daily health.

Tofu is made from pressed soybean milk. To form the pressed “block,” soybeans are soaked for several hours, then ground with cold water. Tofu manufacturers boil the soybeans for up to 10 minutes and allow the juices to coagulate. Adding an acid (glucono-delta-lactone) produces a softer tofu while adding salt (calcium sulfate) solidifies a firmer tofu. The nutritional profile of tofu varies slightly depending on how it’s produced and cooked.

Jackfruit recently became popular as a meat substitute for its savory shredability. You may have seen it at the grocery store as a pulled pork barbecue substitute. It’s versatile for many meaty comfort food recipes. However, jackfruit is, yes, a fruit.

Jackfruit comes from the plant family Moraceae and is related to mulberry trees. The jackfruit tree grows in subtropical and tropical regions, such as the Philippines, Malaysia and Sri Lanka, but it’s native to India. The fruit grows up to two feet tall, weighing in at 40 lbs!

Raw jackfruit is an excellent source of vitamin C, and it also contains other vitamins and minerals, such as vitamin A, B9, riboflavin, copper, magnesium and zinc. Some people say that raw jackfruit retains some sweetness when cooked, even for pulled pork. Simply adjust the spices and sauces according to your taste. Canned jackfruit typically contains less nutritional value, but it’s simpler to use for recipes.

What’s seitan made out of? Seitan (SAY-tan) is also called “wheat meat” since it is a wheat-based meat alternative. That means that it contains gluten, a protein that gives the wheat meat its stringy quality. Those with a gluten allergy or sensitivity should avoid this meat substitute.

Seitan is a good source of protein at a reasonable calorie count. You might find it as a meat substitute for chicken in the frozen food aisle, but it’s a versatile protein alternative for other meat dishes, like pork chops or steak. The downside of commercially made seitan is the added salt. The brand used above is just an example, so keep in mind that the nutritional profile differs per brand. However, you can easily make your own seitan with vital wheat gluten (sold in most grocery stores), plus a few other simple ingredients. Adjust the salt to taste.

Seitan is a term coined by George Ohsawa in 1961 when his student Kiyoshi Mokutani created a wheat gluten product that would later become popular and exported to the United States. However, the heritage of wheat-based protein is much more ancient, by about 1,500 years in China.

Tempeh is one of those perplexing proteins: Some experts can’t decide whether it’s ancient or more modern than expected. Tempeh is made from fermented soybeans and originates from Indonesia, likely Central or East Java. This soybean protein could be a few centuries old or as much as 1,000 years old.

Tempeh is an excellent source of protein and other nutrients, including calcium, iron, phosphorus and riboflavin. Compared to meat alternatives like tofu, it offers a higher protein and nutrient count in general. Just as some cheeses are inoculated with a mold (or starter culture), soaked and cooked soybeans are treated similarly until fermentation occurs. Mycelium naturally binds the soybeans into a compact cake.

Pasteurized tempeh is safe to eat, but you shouldn’t eat unpasteurized tempeh. Steam tempeh for at least 15 minutes before eating it. Tempeh is versatile in that it doesn’t crumble when steamed, but you can crumble it into salads, bake it, marinate it, or fry it.

Vegans and vegetarians probably recognize Boca from trips to the grocery store. Because of its history and people’s likely familiarity with the brand, it’s used as an example here. Nutritionally speaking, it’s not the worst: the protein count is good, and it has some dietary fiber, calcium and iron. However, some frozen meat alternatives can also be high in saturated fat. Double check the label of your preferred plant-based product. Again, keep in mind that the nutritional profiles per brand differ.

Using frozen meat alternatives like soy crumbles allow you to make many of the same comfort food recipes that have meat in them. One advantage to using a plant-based “beef” crumble is that it cooks much faster. You can still brown it in the pan or create a savory grease that is much healthier with avocado oil or olive oil.

What About Other Ready-to-Eat Meat Substitutes?

Even 10 years ago, eating plant-based was difficult due to a lack of comparable meat substitute products for those who wanted them. Some individuals choose a vegan diet from a young age while others grow up eating meat. However, it takes time to find out which diet best suits your needs and preferences. Many struggle with their diet for health reasons and function best on specific diets, which can feel limiting. This is where eating more plant-based opens up options for meal planning. Honestly, most of what we love about meat comes down to mouthfeel and flavor, and meat alternatives are ready to take this to task.

Meat substitutes aren’t exact replicas of real meat but some come really close. Plant-based sausage patties are a good place to start, since “hickory smoked” is a flavor many brands have captured down pat. Some “slow to melt” oils/fats are included in the patty, so they are released much in the same way and time as regular sausage patties. Beyond Beef has gotten this down to an art with its meatless patty options. FieldRoast’s miniature corn dogs dipped in mustard taste remarkably like the real thing, but you cringe less about what’s inside.

The Demand for Vegan Meat and Versatility

The demand for “vegan meat” has increased significantly during the pandemic alone. Retail sales of plant-based meat substitutes grossed $7 billion in 2020, up by 27% compared to 2019, according to CB Insights. Now, “plant-based” has begun to appear next to meat options in the deli and frozen food aisles. There’s even a vegan meat butcher based in the UK offering “soysage” patties and seitan chicken, along with dairy-free products.

There’s a huge variety in the kind of meat substitutes you can purchase in restaurants and stores. A plant-based burger can be made of anything from walnuts and beets or mushrooms and beans, or it could contain soy, seitan, or pea protein for a meat-like texture.

Where some products fall flat in taste and mouthfeel, others excel. When eating meat substitutes, you have to learn to appreciate the recipe for what it is and where it comes from. Jackfruit “pulled pork” may taste a little sweeter raw, but when marinated, cooked up, and paired with a chili fig jam barbecue sauce — suddenly, it’s all perfection.

You’ll also find a great appreciation for the impact of spices on your taste buds. For example, sesame seed oil has a savory crispy bacon-like taste.

Is Plant-Based Meat Better for You?

Eating more plant-based meat can be better for you in the long-run and improve heart health overall, the American Heart Association reports. However, a bad diet is still a bad diet. If you are regularly eating fried food, even if plant-based, your doctor may note high cholesterol levels at your annual physical checkup.

Plant-based proteins branded “crumbles” and “sausage patties” that come from the frozen food aisle can be comparably bad for you as meat products because of high saturated fat content, high sodium and other additives. For example, Highland Farm’s Soy-Based Crumbles have some calcium and iron, but it also contains 30% saturated fat. Reading the Nutrition Facts label is always important, no matter your diet.

Are Meat Alternatives Better for the Environment?

Plant-based meat alternatives emit 30% to 90% less greenhouse gas (GHG) than conventional meat, according to the Good Food Institute. Land use and animal agriculture are one of the primary culprits that contribute to climate change when it comes to food production, even over transportation. The Good Food Institute cites analysis from Our World in Data, indicating that livestock takes up 77% of the agricultural land on Earth. The analysis suggests that the food we consume makes up about a quarter of all GHG emissions.

Additionally a 2018 study published in Science found that food systems impact 26% of GHG emissions with 39% from agricultural production, 32% from land use, and 4.8% from food transportation. Meanwhile, plant-based meat substitutes can be produced on-site with far less environmental impact.

The demand for meat alternatives will most likely continue to increase, which means the versatility of food options, food security and our ability to protect the environment and biodiversity soars alongside that. Including more meat alternatives in your diet is also a great way to explore food diversity and culture while improving your overall health.