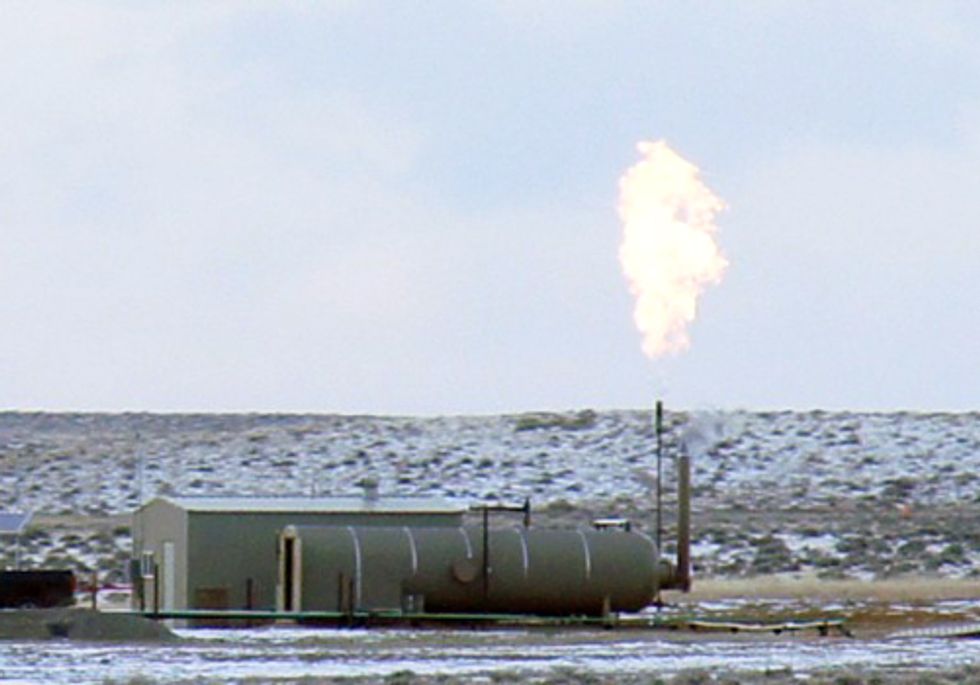 A Cornell study released last year, lead by Professor of Ecology and Environmental Biology Robert Howarth, was the first of its kind to study the global warming impact of natural gas extraction from shale deposits. The conclusion was that fracking releases up to 8 percent of the extracted methane directly into the atmosphere, and reports that all methane will contribute to 44 percent of global warming. Photo Andrew Michler

In recent days, news reports and blog posts have highlighted the problem of fugitive methane emissions from natural gas production—leakage of a potent greenhouse gas with the potential to undermine the carbon advantage that natural gas, when combusted, holds over other fossil fuels. These news accounts, based on studies in the Denver-Julesburg Basin of Colorado and the Uinta Basin of Utah by scientists affiliated with the National Oceanic and Atmospheric Administration (NOAA) and the University of Colorado at Boulder, have reported leakage rates of 4 percent and 9 percent of total production, respectively—higher than the current U.S. Environment Protection Agency (EPA) leakage estimate of 2.3 percent.

While the Colorado and Utah studies offer valuable snapshots of a specific place on a specific day, neither is a systematic measurement across geographies and extended time periods  and that is what’s necessary to accurately scope the dimensions of the fugitive methane problem. For this reason, conclusions should not be drawn about total leakage based on these preliminary, localized reports. Drawing conclusions from such results would be like trying to draw an elephant after touching two small sections of the animal’s skin: the picture is unlikely to be accurate. In the coming months, ongoing work by the NOAA/UC team, as well as by Environmental Defense Fund (EDF) and other academic and industry partners, will provide a far more systematic view that will greatly increase our understanding of the fugitive methane issue, though additional studies will still be needed to fully resolve the picture. What follows is a briefing on the fugitive methane issue, including the range of measurements currently underway and the need for rigorous data collection along the entire natural gas supply chain.

Why methane leakage matters. Natural gas, which is mostly methane, burns with fewer carbon dioxide emissions than other fossil fuels. However, when uncombusted methane leaks into the atmosphere from wells, pipelines and storage facilities, it acts as a powerful greenhouse gas with enormous implications for global climate change due to its short-term potency: Over a 20-year time frame, each pound of methane is 72 times more powerful at increasing the retention of heat in the atmosphere than a pound of carbon dioxide. Based on EPA’s projections, if we could drastically reduce global emissions of short-term climate forcers such as methane and fluorinated gases over the next 20 years, we could slow the increase in net radiative forcing (heating of the atmosphere) by one third or more.

Fugitive methane emissions from natural gas production, transportation and distribution are the single largest U.S. source of short-term climate forcing gases. The EPA estimates that 2.3 percent of total natural gas production is lost to leakage, but this estimate, based on early 1990’s data, is sorely in need of updating. The industry claims a leakage rate of about 1.6 percent. Cornell University professor Robert Howarth has estimated that total fugitive emissions of 3.6 to 7.9 percent over the lifetime of a well.

To determine the true parameters of the problem, EDF is working with diverse academic partners including the University of Texas at Austin, NOAA/UC scientists and dozens of industry partners on direct measurements of fugitive emissions from the U.S. natural gas supply chain. The initiative is comprised of a series of more than ten studies that will analyze emissions from the production, gathering, processing, long-distance transmission and local distribution of natural gas, and will gather data on the use of natural gas in the transportation sector. In addition to analyzing industry data, the participants are collecting field measurements at facilities across the country. The researchers leading these studies expect to submit the first of these studies for publication in February 2012, with the others to be submitted over the course of the year.

The systemic leakage rate will determine whether or not natural gas provides a net climate benefit, with implications for assessing the relative environmental benefits of fuel switching from coal or diesel to natural gas.

As this chart illustrates, lowering the methane leakage and venting rate to 1 percent of total production would double the climate benefit derived from coal-to-natural gas fuel switching over the next 20 years—producing as much climate benefit in that time as closing one-third of the nation’s coal plants. (This assumes that 1 percent is the amount of natural gas produced at well sites lost to the atmosphere, in comparison to a baseline of 2.8 percent, and that the retired coal-fired generation is replaced with equal parts high efficiency natural gas fired generation and zero-emissions electric generation, such as renewables.)

Preliminary studies. Recently, a series of studies has emerged, each providing a snapshot of leakage from a specific region and a specific segment of the natural gas system at a specific point in time:

Some of these studies have revealed or are likely to reveal relatively high levels of fugitive methane emissions, while others are likely to reveal lower levels. None of them, taken alone or in tandem, can yet provide an accurate picture of system-wide leakage. As a news story in the journal Nature concluded, “Whether the high leakage rates claimed in Colorado and Utah are typical across the U.S. natural-gas industry remains unclear. The NOAA data represent a 'small snapshot' of a much larger picture that the broader scientific community is now assembling.”

In other words, anyone who wants to get this important story right will need to be patient and wait for the more comprehensive results to come in later this year. Until then, no accurate conclusion can be drawn about the full scope of this critical issue. Please proceed with caution.