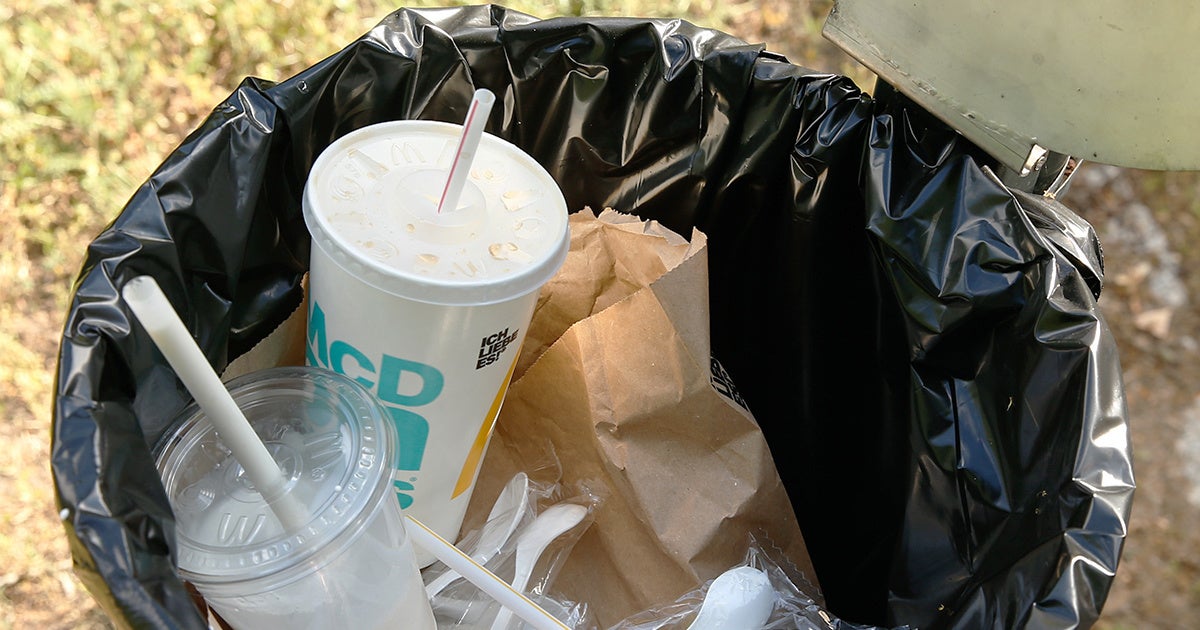 A plastic cup for a shake, a beverage cup for soft drinks and disposable plastic crockery from McDonald's lie in a garbage can in Berlin, Germany on June 28. Gerald Matzka / picture alliance via Getty Images

McDonald’s ditched plastic straws in the United Kingdom and Ireland last fall and replaced them with paper ones made from recyclable materials. It turns out though the new straws can’t be recycled. The plastic ones could, according to CNN.

McDonald’s received praise for an environmentally sound move when it replaced the 1.8 million plastic straws it uses everyday in the UK and Ireland. It said the move was part of a wider effort to protect the environment. Now the British newspaper The Sun revealed an internal memo that said the paper straws were not able to be recycled and should be put in the general waste bin.

“While the materials are recyclable, their current thickness makes it difficult for them to be processed by our waste solution providers, who also help us recycle our paper cups,” a McDonald’s spokesman told the UK’s Press Association news agency, as CNN reported.

So while the straws are technically 100 percent recyclable material, the infrastructure to recycle them does not yet exist. In order to recycle them, they would have to be individually separated from cups and other rubbish.

“They cannot currently be processed by waste solution providers or local authorities unless collected separately,” a McDonald’s spokesperson wrote to CNBC. The spokesperson added that the paper straw conundrum is part of a broader issue plaguing the waste management industry. “The infrastructure needed to recycle has not kept pace with the emergence of paper straws.”

Before anyone advocates a campaign back to plastic straws, keep in mind that infrastructure problems meant McDonald’s was also dumping plastic straws into the waste bin, according to CNBC.

The problem started shortly after McDonald’s rolled out its paper straws, which drew public condemnation for dissolving in soda and making it difficult to pull up milkshakes. The Independent reported that customers were asking for coffee lids to cover their drinks, which countered the motivation behind the move to paper straws.

In response, McDonald’s worked with its straw supplier to create the thicker paper straw.

“We are working with our waste management providers to find a sustainable solution, as we did with paper cups, and so the advice to put paper straws in general waste is therefore temporary,” the company said, as Fox News reported. “This waste from our restaurants does not go to landfill but is used to generate energy.”

The move away from plastic straws follows a backlash to the product after a 2015 viral video showed in graphic, gory detail the process of extracting a plastic straw from a sea turtle’s nose. And the British government has put in place a ban on plastic drinks stirrers, straws and plastic-stemmed cotton swabs starting in April 2020.

“It really can’t be that difficult to replace plastic straws,” said Ed Davey, the UK’s former secretary of Energy and Climate Change. “People will be left wondering where this was just greenwash or a monumental cock-up.”