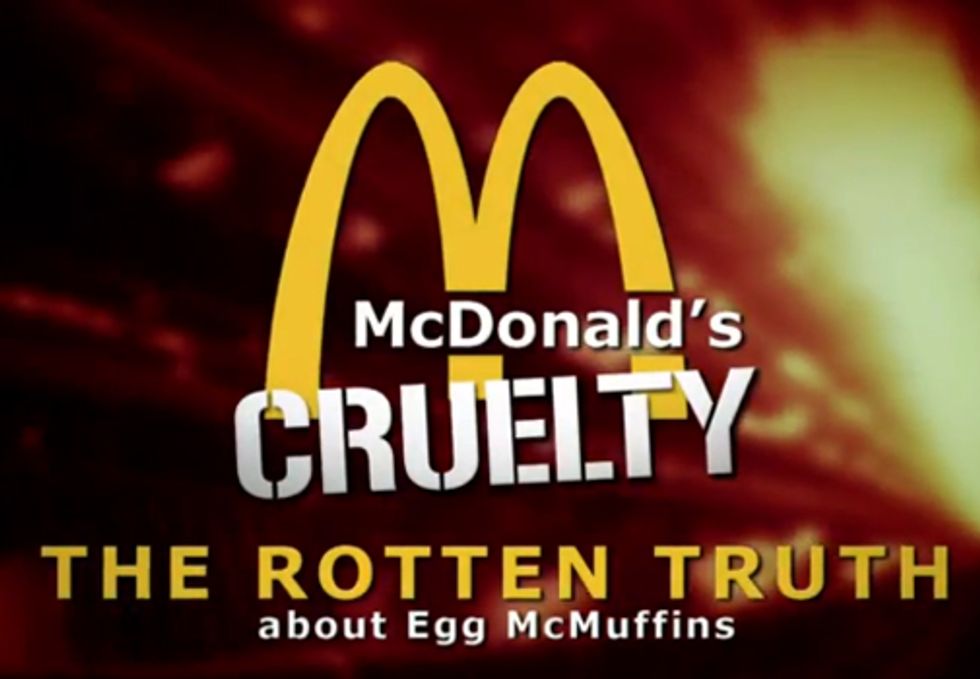 McDonald’s has just discovered bigger isn’t always better. McDonald’s—one of the nation’s largest egg purchasers—has just dropped one of the biggest egg producers in the U.S. after undercover filming showed abuse of chicks and hens at facilities in Iowa, Minnesota and Colorado.

In addition to this undercover video, Sparboe Farms recently received a warning letter from the U.S. Food and Drug Administration that said inspectors found “serious violations” at five Sparboe facilities of federal regulations meant to prevent Salmonella. The warning said eggs from those facilities had been “prepared, packed, or held under insanitary conditions whereby they may have become contaminated with filth, or whereby they may have been rendered injurious to health.”

McDonald’s is finding out that there is a price to be paid for dealing with industrial egg producers like Sparboe. By their very design these industrial systems fail to meet the needs of the hens, protect the consumer from health problems such as Salmonella, and provide farm workers with a safe and positive working environment.

Following the horrific recall of more than half a billion eggs in Iowa last year—where significant failings in basic management of the hens and their environment led to serious Salmonella risk—this is another scandal in an industry that seems incapable of regulating itself. As Animal Welfare Approved (AWA) pointed out at the time, recent research has shown a direct correlation between flock size and confinement and the presence of Salmonella—basically the bigger the flock and the more confined, the greater the risk of infection. It is also well documented that caged systems inherently lead to poor animal welfare. A standard industry cage forces birds to live in an area smaller than a sheet of paper. The natural stress response to such close confinement is pecking and cannibalism, a problem which the industry has “solved” by removing all or parts of the birds’ beaks. This type of band-aid approach is especially disturbing given that science has already shown pasture-based systems to resolve this issue.

As McDonald’s is discovering, part of the problem with the industrial farming model is that big agribusiness puts production in the hands of very small group of producers—leaving consumers and birds vulnerable to disease and abuse with limited options of alternative products. There must be a point at which McDonald’s, Target and other retailers of eggs look beyond their corporate bottom line and see the future.

It may surprise you to know that McDonald’s has some experience of better and more sustainable sourcing—McDonald’s Europe that is, not McDonald’s U.S. Over 95 percent of all eggs used by McDonald’s across 21 European countries are either free-range or cage free “barn” eggs. McDonald’s in the U.K. says that in 2009 they used more than 91 million free-range (pastured) eggs on their breakfast menu, and that all the eggs for their sauces and the breakfast menu were sourced from British farmers. In addition, the hens are all fed non-GM feed, and the company estimates that the egg farmers have planted nearly half a million trees on pastured laying hen ranging and foraging areas to provide shade and shelter for the hens, thereby improving the environment on the farms. McDonald’s Europe is committed to reaching a 100 percent non-caged egg supply by 2012.

McDonald’s Europe is working with companies that see the farmers and their birds and animals as an important and integral part of their business, not just figures on a balance sheet. This model of production is providing 100 percent pastured eggs in one country and a growing majority of non-caged egg in another 20 countries. This is the result of a committed effort on the part of McDonald’s to learning how to stimulate demand, manage distribution and to set real, monitored and achieved targets for improvement. The success of this model shows that the lessons have been learned. Why then can McDonald’s in the U.S. not learn from its European operation?

There are many farmers in America who are willing and able to step up and provide these pastured eggs for companies like McDonald’s, if only the company were seriously interested. In a joint statement Nov. 22, John Boyd of the National Black Farmers Association and Andrew Gunther of Animal Welfare Approved invited executives of McDonald’s to start the conversation and to make a commitment to move away from unhealthy and abusive caged eggs. The alternative is out there. We challenge McDonald’s to start looking for it.