McDonald’s Trial with Meatless Burger Company Beyond Meat Has Ended 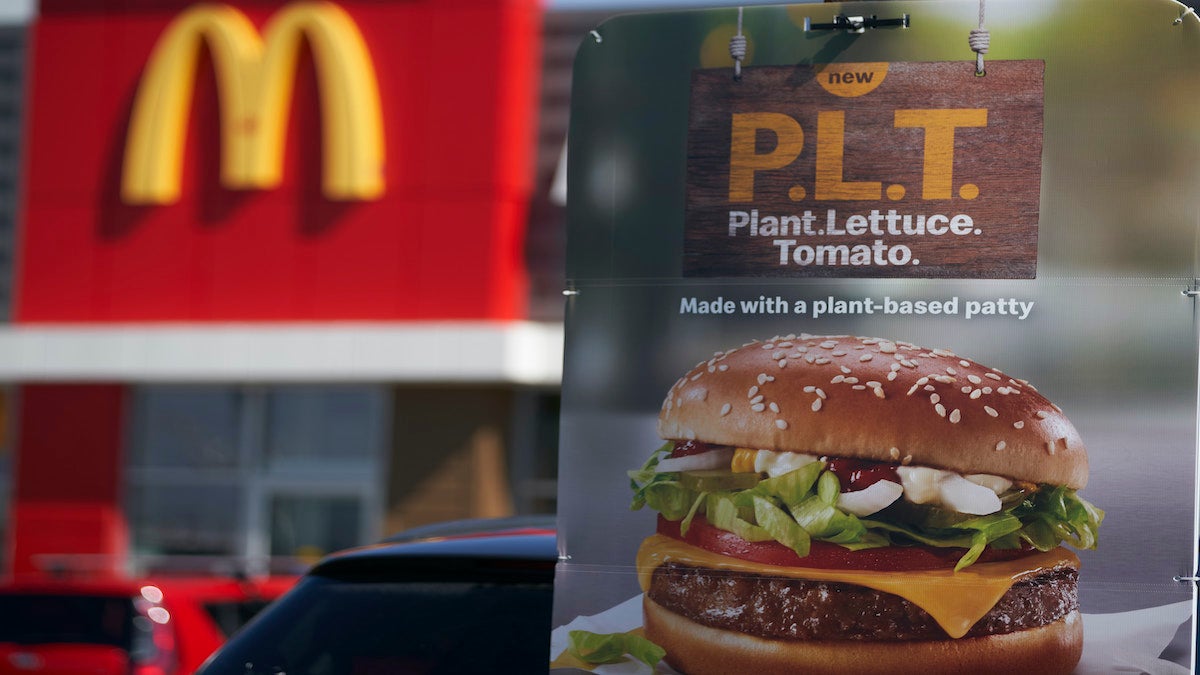 Beyond Meat's PLT is advertised at a McDonald's in London, Ontario during a trial that ended in April. GEOFF ROBINS / AFP via Getty Images

McDonald’s’ ended a highly-publicized six-month trial of a meatless Beyond Meat burger April 6 without announcing any plans to continue or expand the partnership, CBC News reported Thursday. Instead, it simply removed the burger’s information from its website.

Beyond Meat’s shares plunged as much as 10 percent following the CBC story, as investors had hoped for a permanent arrangement between the alternative meat company and the fast-food giant, according to Business Insider. McDonald’s stock was also trading down one percent, CNBC News reported. And some customers also expressed disappointment.

“I was really upset because it’s the only thing on the menu that I could eat,” London, Ontario-based vegan customer Jenna Walker-Cronk told CBC News. “I don’t know how long it takes to get a product out, but I feel like, at this point, I’m not keeping my hopes up.”

Hi there. Our Plant-Based Burger was being tested in several Markets until April 6th. We have no current plans to bring it back to our menu at this time. However, we will be sure to share your feedback with our team for future consideration.

Both McDonald’s and Beyond Meat insisted nothing about their relationship had changed.

“We’re evaluating learnings from our recent test to inform future menu options,” a McDonald’s spokesperson told CBC News by email Thursday. “As we look ahead, we will plan to bring plant-based options to the menu at the right time for customers in individual markets.”

Beyond Meat, meanwhile, said the trial had gone well.

“We can only comment generally and share that we were pleased with the test,” Beyond Meat spokesperson Shira Zackai told CBC News by email Monday.

McDonald’s ran two trials of the burger in dozens of restaurants in southwestern Ontario between September 30 of 2019 and April 6. It sold the burger as the PLT, for plant, lettuce and tomato, and said it was trialling the burger in Canada for a potential global rollout.

In a May earnings call, JPMorgan analyst Ken Goldman expressed doubt to Beyond Meat management about what the trial’s end had meant, as Business Insider reported.

“[T]ypically if a test did well, the retailer wouldn’t end it, they would expand it,” Goldman said.

But Beyond Meat CEO Ethan Brown said that the lack of expansion did not necessarily reflect on the trial.

“I can assure you there’s no issue with McDonald’s … this is a way it’s been planned and the way it’s being executed. And there’s been no change at all,” Brown said. “I can’t promise you that we’ll see a massive expansion tomorrow. But there’s been no change in information since we began this test and got good results in the beginning and got good results at the end.”

It is possible that the lack of immediate follow-up had less to do with the trial itself and more to do with the fact that it wrapped up in the midst of the coronavirus pandemic.

“It’s pretty hard to sort of make a decision on rolling out a product across the world, or even across America, when you’re in the middle of a crisis,” Toronto-based retail consultant Bruce Winder, who wrote a new book called Retail Before, During & After COVID-19, told CBC News.

Still, McDonald’s lags behind its competitors when it comes to meatless offerings in North America. It has yet to offer a plant-based burger in the U.S., while Burger King has been selling the Impossible Burger for almost a year, CNBC pointed out. Impossible Foods also signed a deal this week to sell breakfast sandwiches at Starbucks, Investing.com reported.

“People are increasingly aware plant-based products are going to completely replace the animal-based products in the food world within the next 15 years. That’s our mission. That transformation is inevitable,” Impossible CEO Patrick Brown told CNBC’s Jim Cramer June 23, according to Investing.com.

McDonald’s, which offers meatless burgers in countries including Finland, Sweden, India, South Africa and Australia, has promised a meatless burger will eventually be on its general menu, CBC News reported.

🌱🍔
"I do expect that we will have plant based on the menu its just a question of when" -Chris Kempczinski, Mcdonalds CEO$BYND $MCD #BeyondMeat#BYND#McDonalds pic.twitter.com/TAHht1P1xj

But for now, its North American customers will have to wait.

“It feels like [McDonald’s is] behind everyone,” Walker-Cronk told CBC News. “There’s basically nothing else that I can eat there except for the french fries.”