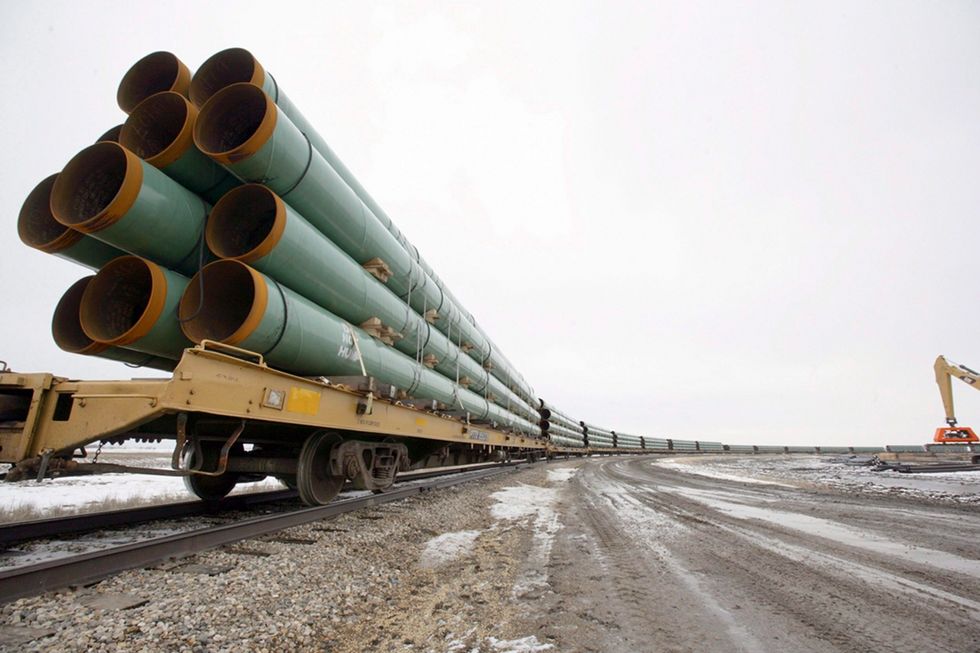 In the wake of an Obama administration decision to conduct a new review of the Keystone XL tar sands pipeline, 103 American mayors sent a letter expressing concerns about the pipeline’s impacts on communities to President Barack Obama.

The mayors’ letter demonstrates the widespread support that exists in communities across the country for rejecting the proposed Keystone XL tar sands pipeline. It also underscores the importance of carrying out a new, in-depth review of the project that includes a careful look at the project’s impact on our nation’s climate change goals. The mayors thank the president for the new review, but remain convinced that a full, fair review can yield only one answer—this pipeline is not in the nation’s best interest.

The letter, signed by mayors from 28 states, 10 state capitals, and serving a combined population of more than 9 million Americans, states: “Expansion of high carbon fuels such as tar sands undermine hard work by local communities everywhere to fight climate change, reduce dependence on oil and create a clean energy future.”

“President Obama is listening to concerns from all across America about the proposed Keystone XL tar sands pipeline, and now mayors from coast to coast are weighing in,” said Susan Casey-Lefkowitz, director of the International Program for the Natural Resources Defense Council. “Mayors are at the frontlines of reducing our dependence on oil and have been working to create a more efficient system because they take climate change seriously.”

The mayors’ concerns with carbon impacts from high carbon fuels like tar sands oil are well founded. Just one day before President Obama announced his decision to conduct a new review of the Keystone XL pipeline last week, the International Energy Association announced in its annual report that the planet is already on pace to produce enough CO2 to lock-in to catastrophic levels (2°C) of climate change in just five years. Carbon emissions from new tar sands oil production would exacerbate the situation.

“We are heartened by President Obama’s move to give the Keystone XL project a sober second thought. We encourage him to use this opportunity to take a closer, critical look at what is really driving this project—a business strategy to increase profits and expand access to export markets, as the proponents explained in hearings when they sought approval for the Canadian portion of the line. By diverting tar sands crude from Midwest refineries where it currently goes, to the Gulf, Keystone XL opens the door for it to be sold at higher prices to the Gulf and export markets. This will likely raise Midwest fuel prices. Keystone XL adds insult to injury by having Americans bear the brunt of environmental risks of transporting this crude across our heartlands and then having to likely pay higher prices for fuel, all while huge amounts of this oil leaves our ports for lucrative export markets.”

“What this country needs to focus on is reducing our reliance on fossil fuels! Simply replacing foreign oil with a process like the tar sands brings unacceptable risks to important water resources everywhere. Fresh water is priceless and we need to start treating it as such.”

“When the President said recently that he thought “folks in Nebraska like all across the country” aren’t going to trade putting our kids’ health at risk from contaminated drinking water, or potentially harming agriculture in our heartlands all for “a few thousand jobs," he hit the nail on the head. In fact, we don’t need to make the trade at all—jobs that are actually good for the environment can employ people across the country, whereas the Keystone XL pipeline will create jobs only for a small number of people in a few states, and not necessarily where jobs are needed most.”

“Mayors work hard to reduce their carbon footprints and our dependence on oil at the local level, because their citizens are worried about climate change. People are seeing changes in the climate already, and frankly don’t much care what naysayers and skeptics say anymore. The people we serve expect us to take action now, help slow down climate change, and preserve the Earth for their children and grandchildren. Avoiding further tar sands pipelines, like the Keystone XL, is a critical step in making that happen.”

“Keystone XL is not a simple contest between the environment and the economy, as some have suggested. When we take local actions that help our climate, people see additional benefits to their wallets and health and say, “Wait—you mean we can help the climate, be healthier and save money in the process? What are we waiting for!” Use less oil, have more money in your pockets, breathe better air, preserve water quality—it has really evolved into a no brainer for many people everywhere.”

“As the mayor of a community near several refineries, I know there are always risks with pipelines and refineries, even with conventional oil. Add to this the increased environmental downsides of tar sands crude, and the costs too clearly outweigh the benefits to make sense. It was this calculus that prompted our City Council to adopt a resolution that would help keep tar sands oil out of Bellingham.”

A copy of the letter and a backgrounder on mayoral concerns over the Keystone XL project can be found on Susan Casey-Lefkowitz’s blog.

The Natural Resources Defense Council (NRDC) is an international nonprofit environmental organization with more than 1.3 million members and online activists. Since 1970, our lawyers, scientists, and other environmental specialists have worked to protect the world's natural resources, public health, and the environment. NRDC has offices in New York City, Washington, D.C., Los Angeles, San Francisco, Chicago, Livingston, Montana, and Beijing. Visit us at www.nrdc.org