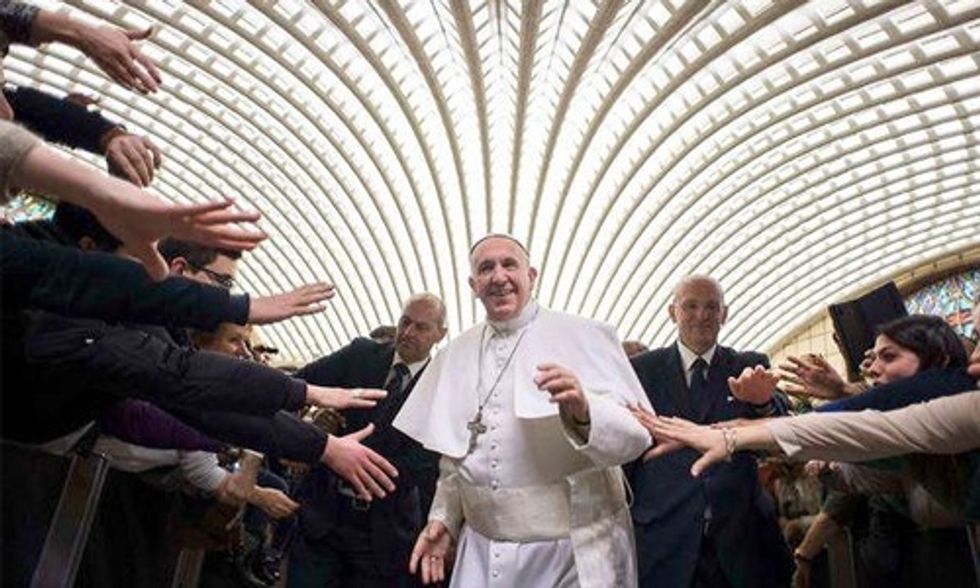 The leaders will sign today a declaration stating that the Paris summit "may be the last effective opportunity to negotiate arrangements that keep human-induced warming below 2 degrees centigrade."

In one of the opening speeches, California Gov. Jerry Brown "denounced global warming deniers, who he said are 'bamboozling' the public and politicians with false information to persuade them that the world isn’t getting warmer," according to The Blaze. Gov. Jerry Brown, whose state is in the midst of an epic drought, urged world leaders to stand up in opposition to climate deniers.

“We have a very powerful opposition that, at least in my country, spends billions on trying to keep from office people such as yourselves and elect troglodytes and other deniers of the obvious science,” said Gov. Brown. The final declaration states that “human-induced climate change is a scientific reality and its effective control is a moral imperative for humanity.”

Gov. Brown's remarks were met with rapturous applause, and to Brown's credit, California's environmental policies are a model for other governments. But many believe Brown needs to do more.

David Siders of The Sacramento Bee and George Skelton of The LA Times both point out that the Pope and the governor part ways on cap and trade. Brown's administration has hailed it as a solution to "throw off the shackles of fossil fuel dependency" while growing the economy, according to Skelton.

The Pope, on the other hand, was heavily critical of the concept of cap and trade in his encyclical. Buying and selling carbon credits, Pope Francis wrote, “may simply become a ploy which permits maintaining the excessive consumption of some countries and sectors.” Skelton calls cap and trade a "euphemism" for "peddling pollution permits" as a way to raise "a ton of money for state government."

And there's another big issue Pope Francis and Gov. Brown don't see eye to eye on: fracking. It hasn't received much attention from the press, but the Pope spoke out against fracking in 2013 when he was interviewed by a fellow Argentinian, Fernando Solanas, who produced the documentary La Guerra del Fracking, or the Fracking War.

Several groups, part of the coalition Californians Against Fracking, are hoping that the Pope will use the summit as an opportunity to convince Gov. Brown and other world leaders to ban fracking.

“We in the faith community applaud Pope Francis for highlighting the moral imperative of addressing climate change and protecting creation, and appreciate that he is bringing leaders like Jerry Brown to the Vatican to highlight the issue,” said Rev. Ambrose Carroll, a senior pastor at the Church by the Side of Road in Oakland, California, and a member of Faith Against Fracking. “We hope he will be able to get Governor Brown to see the indisputable incompatibility of his attempts to fight climate change while enabling the worst climate polluters to continue fracking.”

Yesterday, Latino communities in California, who disproportionately live near fracking and other extreme oil drilling sites in the state, sent a letter to Pope Francis urging him to intercede on their behalf. In California, more than 60,000 children—of which 60 percent are Latino—attend school within one mile of a stimulated oil well, according to Californians Against Fracking. Last week, a California family sued Gov. Brown arguing that the state's new fracking regulations do not protect the health of Latino children.

The groups are hoping that Pope Francis will sway Gov. Brown to follow in the footsteps of states such as New York, which has an outright ban on fracking, and Maryland, which has a two-year moratorium.

Gov. Brown is "an American politician who, despite having done much to further the global conversation on climate change, continues to put his own state's environmental and public health at risk by supporting the expansion of fracking and other extreme oil drilling," said Wenonah Hauter, executive director of Food & Water Watch.

"We urge Pope Francis to send a clear message to Brown and other elected officials that fracking—in California, in Europe or elsewhere—has no place in his vision for a greener planet.”

Cuban Embassy Opens in DC After 54 Years: Will Cuba Remain the ‘Green Jewel’ of the Caribbean?