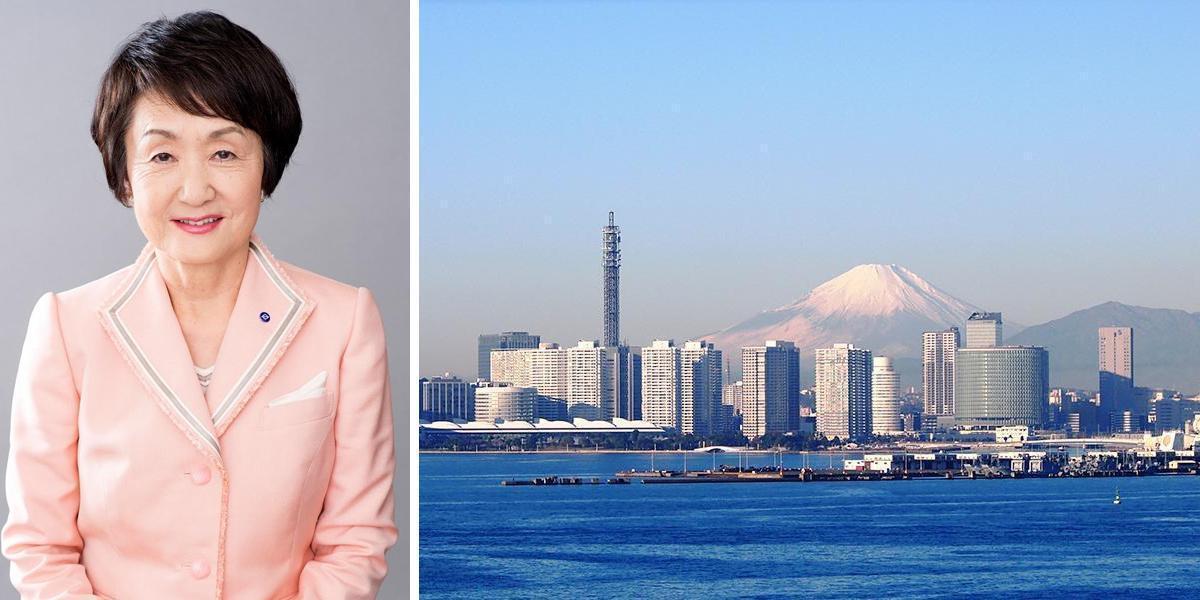 Fumiko Hayashi has been mayor of Yokohama since 2009 and is the first woman to hold the post. Her previous roles have included president of BMW Tokyo, president of Tokyo Nissan Auto Sales and chairperson and CEO of the Japanese supermarket chain Daiei.

In 2006, Forbes magazine named her 39th most powerful woman in the world, the highest rank for a Japanese woman. Ms. Hayashi is the president of Mayors Association of Designated Cities in Japan and also serves as the member of the Council for Gender Equality of the Cabinet Office of Japan. She has also written several books on management and workforce relationship.

C40 Cities had the chance to connect with Hayashi to learn more about her efforts:

Q. What has been your biggest climate or environmental achievement as mayor?

A. Yokohama has implemented urban development in cooperation with various stakeholders such as citizens, companies and other groups, overcome many environmental issues and promoted city development that harmonizes the environment and the economy. In dealing with climate change, we are promoting efforts that take advantage of our achievements in urban development up until now.

With regard to energy issues in particular, through the Yokohama Smart City Project, in collaboration with 34 major Japanese companies, we are aiming to realize an advanced, energy-circular city with systems aimed at optimizing the balance between energy supply and demand in existing urban areas such as by introducing the Home Energy Management System in 4,200 homes and improving the energy efficiency of commercial buildings. We were well-received at C40 and awarded the C40 Cities Award in the Clean Energy category in 2016. Behind this was the fact that ours are some of the world’s leading large-scale projects in existing urban areas.

Q. What are the key climate change and environmental challenges facing your city? What are you doing to address them?

A. Developing the city to be low-carbon and disaster-resilient. With 3.73 million citizens and more than 110,000 businesses, Yokohama is a major city and a major energy consumer. The key is solving issues and for this, not only the government but also the power of our citizens—which is the pride of Yokohama—and the technical expertise cultivated in the public and private sectors have become major strengths. As a “FutureCity,” we will continue to work hand in hand with citizens and companies.

Q. Were there any women leaders who inspired you when you first entered politics?

A. A woman leader I was inspired by is Sadako Ogata, who helped provide humanitarian aid for many years as Japan’s first UN High Commissioner for Refugees. Even as ethnic and religious conflict was intensifying, I was impressed with the way she visited these various locations and flexibly built new support frameworks through her strong leadership. I met her in person when she was serving as president of the Japan International Cooperation Agency and she was a wonderful woman with a strong will, heart-warming humanity and overflowing hospitality.

On the other hand and much regrettably, the participation of women in Japanese politics seriously lags behind. Even at present, it represents no more than 1.6 percent overall, with only 28 women leaders of local governments. Having women in leadership positions can help deepen men’s understanding of working women and promote a society in which women can participate more. I view this as my mission, after having worked for more than 50 years in an androcentric structure and is why I took up politics.

Q. What obstacles do you think women leaders still face in delivering their agenda, including on climate change?

A. Being a woman will not be an obstacle in implementing the agenda. The strength of women lies in leadership that employs empathy and acceptance. Better results are produced by men and women taking advantage of each other’s strengths, coming together and producing results in tandem. Therefore, I believe that women’s ability to demonstrate their capabilities in all areas, including climate change countermeasures, will yield great results. Under the leadership of C40 Chair Anne Hidalgo, mayor of Paris, we will deepen the unity of C40 member cities and continue to work to implement climate change countermeasures.

Q. What advice would you give to young women in Yokohama—or any other city—who are concerned about climate change and want to do something about it?

A. Climate change is a complicated and very difficult issue occurring on a global scale and is caused by a variety factors. It is critical to think about this global issue with a broad perspective but also in terms of what can we do in our own everyday lives and what is to be done in society as a whole—thinking together with numerous people and putting into practice what is initially possible. I expect much from today’s young women.