Mayor and Residents Speak Out Against Constitution Pipeline 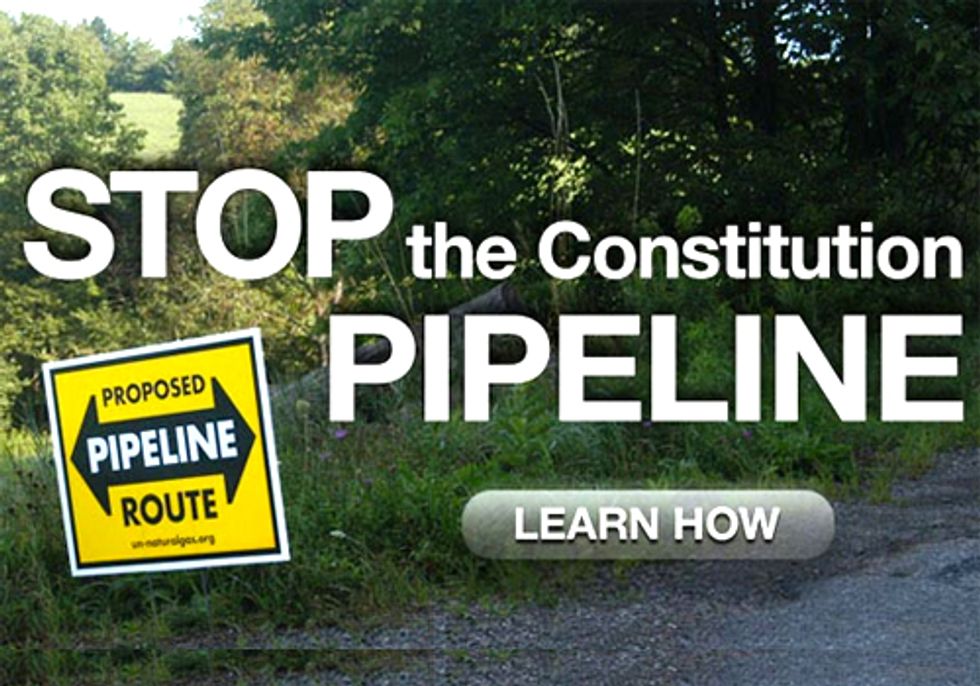 The pipeline is currently in the midst of a Federal Energy Regulatory Commission (FERC) pre-application public scoping process, with a public hearing to be held on Wednesday, Oct. 24 at 7 p.m. at the Foothills Theatre at 24 Market St. in Oneonta, NY. Nevertheless, for a pipeline that stands to affect many communities along its route, there has been insufficient public awareness and involvement to date. One of the goals of the press conference today is to encourage people to go to the public hearing and make comments to FERC online.

"Considering the heavy impacts on air and climate from the Williams Compressor Station—the beginning of the Constitution Pipeline in PA—and considering the devastating impacts on water, public health and communities in all six counties, FERC should deny this permit altogether," said Iris Marie Bloom, executive director of the Philadelphia-based grassroots nonprofit organization Protecting Our Waters. "FERC must extend the permit process by at least six months, and hold hearings in each affected county, or stand accused of shutting the public out of the permitting process. Informed residents are saying loud and clear: 'Stop the Constitution Pipeline!'"

The group raised concerns about the planned use of eminent domain to secure the land for the pipeline if it is approved. The Constitution Pipeline is a proposed project of companies Cabot Oil & Gas and Williams, both out-of-state companies that are heavily invested in fracking in the Marcellus Shale. Organizers noted that both companies have terrible safety records. Cabot Oil & Gas and Williams are currently in a pre-application filing stage with the pipeline.

Craig Stevens, a Pennsylvania resident who has firsthand experience with similar pipelines said, "The United States Constitution protects us from taking of property by eminent domain, but the Constitution Pipeline seeks to do exactly that, with no benefit to the general public."

The pipeline poses a serious public health risk to the communities through which it would pass. Similar pipelines and development have come hand-in-hand with accidents, spills, leaks and other risks. Speakers noted that the pipeline is part of an infrastructure build out for fracking, an inherently dangerous process.

Vera Scroggins, resident of Silver Lake Township, PA said, "The build out of pipelines represents the expanding footprint of infrastructure which precludes fracking. This is disturbing as the drilling process is illegal in New York, due to serious health and safety concerns."

Maya van Rossum, the Delaware Riverkeeper whose organization is experienced with pipelines and accompanying infrastructure, said, "Looking at the fundamental lack of need for the Constitution Pipeline, the environmental harm it will cause simply can't be justified, period. The pipeline will induce gas well development, not follow it, making this project a speculative venture of the worst kind— it's the classic 'build it and they will come' but it's on our backs as taxpayers and at the expense of the environment and public health."

Learn more about pipelines by watching this video:

Visit EcoWatch’s PIPELINE and FRACKING pages for more related news on this topic.