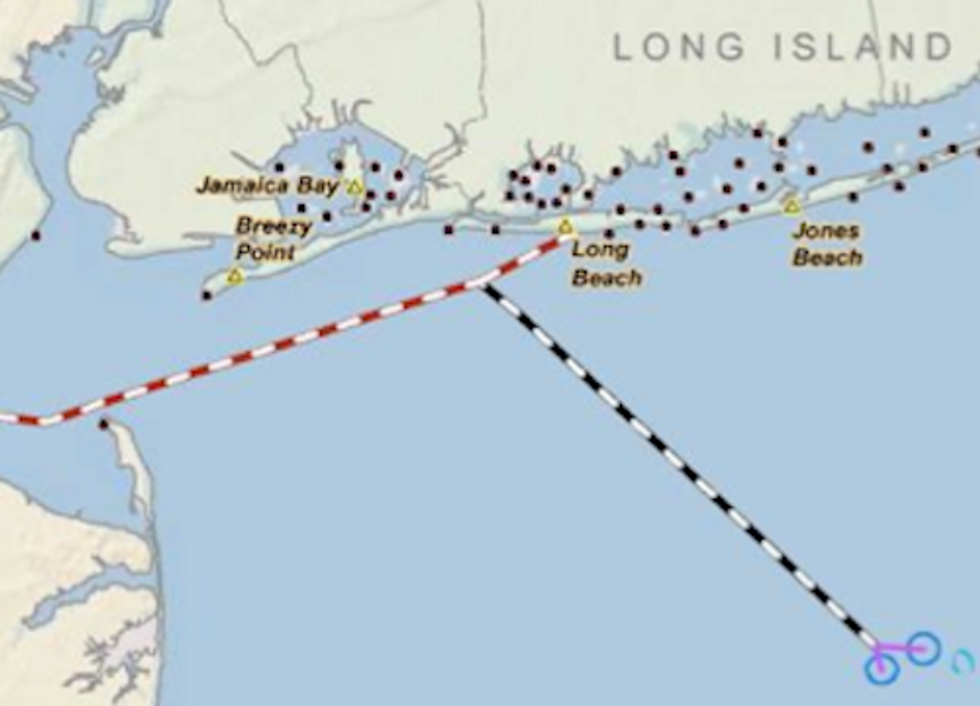 Evoking the international call for maritime distress, 36 groups stood united today in opposition to a Liquefied Natural Gas (LNG) port proposed to be built off of Jones Beach, NY. The groups, from across New York and New Jersey, call on Gov. Cuomo to oppose the plan.

The proposal by Liberty Natural Gas (Liberty LNG), a corporation owned by a nameless bank account in the Cayman Islands, was submitted to the Maritime Administration, a sub-agency of the Department of Transportation.

The organizations, representing thousands of citizens, called on Gov. Cuomo to oppose the creation of Liberty LNG’s “Port Ambrose” project. The port would be near the entrance to the New York Harbor, in two active Coast Guard training areas, in the middle of a proposed offshore wind area and among several fishing areas and wildlife migration routes. The port, south of Jones Beach, NY and east of Monmouth Beach, NJ, would be a fossil fuel hub, connecting massive oceangoing LNG vessels to a natural gas pipeline located off of Atlantic Beach, NY.

Gov. Christie warned that the “project would create a heightened risk … including potential accidents or sabotage disrupting commerce in the Port of New York and New Jersey.” The project was officially blocked by Gov. Christie when he invoked federal Deepwater Port Act authority (allowing adjacent coastal states to approve or disapprove projects) in February 2011.

Now, more than two years later, Liberty LNG is back. Having shifted their proposed port a few miles to the northeast, Liberty LNG is declaring it a "new" application, despite the fact that the port is the same design, creates the same risks and has the same economic, environmental, social and national security drawbacks.

“LNG’s deep-water Port Ambrose project would pose an economic, security and environmental risk, while providing no benefits what so ever to New York taxpayers or businesses," said Nassau County Legislator David Denenberg. "The project would hurt our energy independence and promote foreign imports of natural gas. Therefore, for our environment, safety, economy and future, I call on New York State to follow New Jersey’s lead and reject this proposal.”

“At a time when our coastal communities shattered by Superstorm Sandy are trying to recover, Liberty LNG is skulking around behind closed doors planning this risky and harmful fossil fuel facility at our doorstep," said Cindy Zipf, executive director, Clean Ocean Action. "During Sandy, wave heights in the area of the proposed port were over 30 feet. As we restore our shore, our region will depend even more on the clean ocean economies. Gov. Christie said no early, loud and clear; Gov. Cuomo also needs to sink this project and the sooner the better.”

“The South Shore Audubon Society (SSAS) strongly opposes Liberty Natural Gas' attempt to place a LNG facility in New York waters south of Jones Beach. Liquefied natural gas, increasingly being produced and used as an export commodity, is just another fossil fuel that contributes to global warming, climate change and sea level rise,” said Jim Brown, president of the SSAS. He added, “We strongly urge Gov. Cuomo to veto this planned facility and to concentrate our state energy policy on advancing renewable energy and energy conservation as the best solutions to our energy needs.”

“Natural gas is a dirty fossil fuel and every step taken toward its expanded development in the region is a step away from a clean, sustainable energy future," added Alex Beauchamp, Northeast region director, Food & Water Watch. "Exporting domestic natural gas only increases the demand for fracking, the extreme drilling method that poses one of the gravest threats to clean water and environmental health in America today. Local residents shouldn't be forced to suffer the dangerous consequences of natural gas development here for the sake of export markets on the other side of the world.”

“We need a LNG port off our coast like we need another hurricane,” said Jeff Tittel, director of NJ Sierra Club. "We already have too many threats to our region from fracking and pipelines we should not be 'fossil fuelish' with our coast. We need clean energy instead to create jobs and protect our environment.”

“Gov. Cuomo, I ask you this: ‘Haven't our south shore communities suffered enough from Hurricane Sandy? How can you consider approving a LNG station right in the middle of the hurricane's path?’” said Claudia Borecky, president of the North and Central Merrick Civic Association. “Gov. Christie rejected this proposal because it was wrong for New Jersey. This project is wrong for New York as well. Gov. Cuomo must protect our waterways and our coastal communities and say ‘no’ to this LNG facility.”

“Storage of dangerous pollutants off the waters of one of the nation's most densely populated areas is reckless, especially in light of our raised awareness of our coastal vulnerabilities, post-Superstorm Sandy," added Kathleen Cunningham, chairwoman of Quiet Skies Coalition. "Chris Christie had it right for New Jersey. Let's make sure we get it right for New York.”

“Putting our oceans at risk by considering Liberty LNG's ‘Port Ambrose’ in New York's harbor is short sighted to say the least. It flies in the face of reason since what is needed now is a policy for transition from fossil fuels to renewable energy sources. We do not need a risky LNG deep water port for the import or export of liquefied natural gas. The proposed ‘Port Ambrose’ will not provide permanent jobs for New York or New Jersey and will have detrimental environmental impacts to the ocean and the marine life,” concluded Suzanne Golas, director WATERSPIRIT.