Matt Damon Slams Michigan Governor Over Flint Water Crisis: 'At the Very Least He Should Resign!' 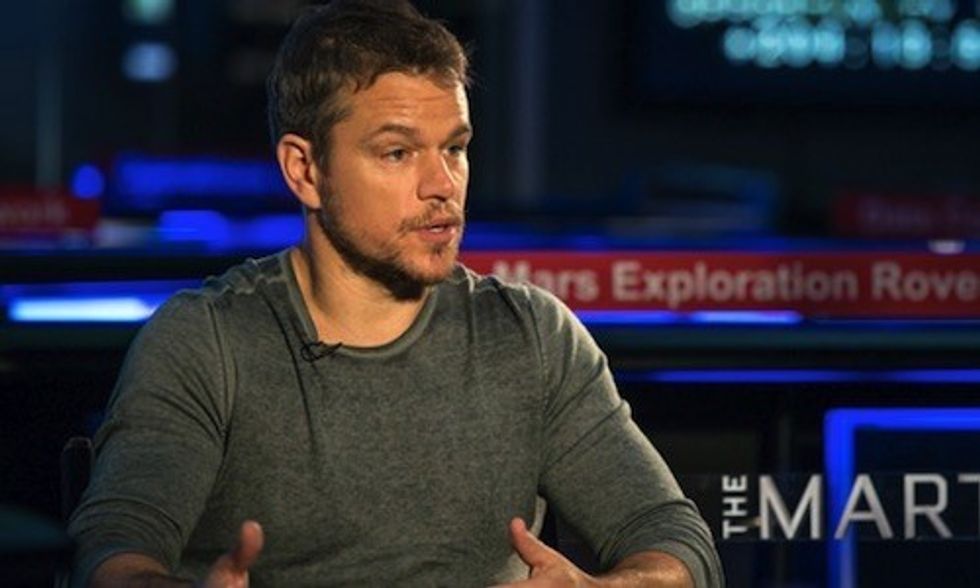 Matt Damon has joined the escalating outrage over Gov. Rick Snyder's handling of the water crisis in Flint, Michigan and has called on embattled governor to step down from his post.

Oscar-nominated actor and clean water advocate Matt Damon has called on the resignation of Michigan Gov. Rick Snyder over Flint's ongoing water troubles. Residents, including 8,000 children, have been exposed to high levels of lead in the city's water supply. Photo credit:
Flickr

“At the very least he should resign! At the very least,” the Hollywood actor and co-founder of the nonprofit Water.org told The Daily Beast at the Sundance Film Festival on Saturday.

“Listen, everybody’s entitled to a fair trial in the United States of America, but that man should get one. And soon. That’s just my personal opinion.”

Flint's water disaster started back in April 2014, when an unelected state official switched the city’s main water supply from Lake Huron to the Flint River to save money. This ill-fated move has corroded Flint's aging pipelines and exposed the city's 102,000 residents—especially children—to the potentially crippling effects of lead poisoning and led to two outbreaks of Legionnaires Disease that has killed 10 people.

To make matters worse, emails released last week revealed that Gov. Snyder and his administration knew about Flint’s water quality issues as early as February 2015 but his administration said the problems would eventually “fade in the rearview.”

Gov. Snyder did not acknowledge the unsafe condition of the city’s water until Sept. 30, 2015. The governor apologized to the city in December. President Barack Obama has since declared a state of emergency and is allocating $80 million in new funding to Michigan to bolster its cities' water infrastructures.

The Martian star co-founded his water advocacy nonprofit with Gary White to advocate for safe and clean water to citizens worldwide.

“In terms of the work that we do, to see it happening in Flint, every parent in America feels it on a visceral, deep level, because we ask the question, ‘What if that was my child?’” Damon, a father of four daughters, told The Daily Beast.

“It’s unconscionable in Flint, and it’s unconscionable that 663 million people around the world are dealing with that every day in the developing world," he continued. "Those are the communities we interact with, and that’s the mission of Water.org: to end that suffering for those children, and those parents.”

Damon also pointed out that race and poverty are linked to Flint's water troubles as well as in developing countries.

“My sincere hope for our country and our world is that this greater connectivity is going to lead to a greater empathy and an awakening to the plight of our fellow citizens,” Damon told The Daily Beast. “These are huge systemic injustices we’re talking about that hopefully everybody is waking up to. The question then is, what do we do about it? It will be interesting to see where we go from here.”

Democratic presidential candidates Hillary Clinton and Bernie Sanders have both demanded action in Flint and called on Gov. Snyder to resign.

“There are no excuses. The governor long ago knew about the lead in Flint’s water. He did nothing. As a result, hundreds of children were poisoned. Thousands may have been exposed to potential brain damage from lead. Gov. Snyder should resign,” Sanders said in a Jan. 16 press release. "Because of the conduct by Gov. Snyder’s administration and his refusal to take responsibility, families will suffer from lead poisoning for the rest of their lives. Children in Flint will be plagued with brain damage and other health problems. The people of Flint deserve more than an apology."

According to Bloomberg Politics, Clinton said in Iowa on Sunday that she views Flint's water crisis as “not just as an environmental disaster and a health crisis,” but that “(t)his is a civil rights issue.”

“If it had been a rich white suburb where the water was brown and smelly, people would have come immediately to the rescue of those families,” Clinton said.

Meanwhile, outspoken filmmaker and Flint native Michael Moore, has gone a step further than the growing chorus, and urged for the arrest of Gov. Snyder.

Moore posted a petition on his website and wrote a letter to the disgraced politician:

Thanks to you, sir, and the premeditated actions of your administrators, you have effectively poisoned, not just some, but apparently ALL of the children in my hometown of Flint, Michigan.

And for that, you have to go to jail.

To poison all the children in an historic American city is no small feat. Even international terrorist organizations haven't figured out yet how to do something on a magnitude like this.

You can read the rest of Moore's letter here.