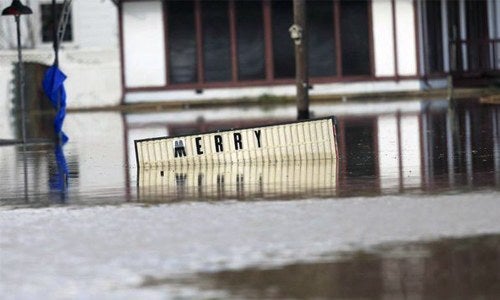 At least 43 people died over the Christmas holiday weekend in a series of storms that hit the South, Southwest and Midwest U.S.

Tornadoes were reported in 10 states, including Michigan, which recorded its first-ever tornado in December. The deadliest storms were in Texas, where at least 11 people died when tornadoes hit areas near Dallas. As many as 1,000 homes were damaged. Now a major snowstorm is heading toward the region.

Flash floods also killed at least 13 people in Missouri, Illinois and Arkansas, where as much as 9 inches of rain fell on some areas. Meanwhile, heat records were broken on Christmas Day across the East Coast from Maine to Georgia.

This weekend of extreme weather comes as climatologists predict 2015 will be the warmest year ever recorded, smashing last year’s record. We are joined by leading climate scientist James Elsner, professor at Florida State University and co-author of The Increasing Efficiency of Tornado Days in the United States, a paper recently published in the journal Climate Dynamics.