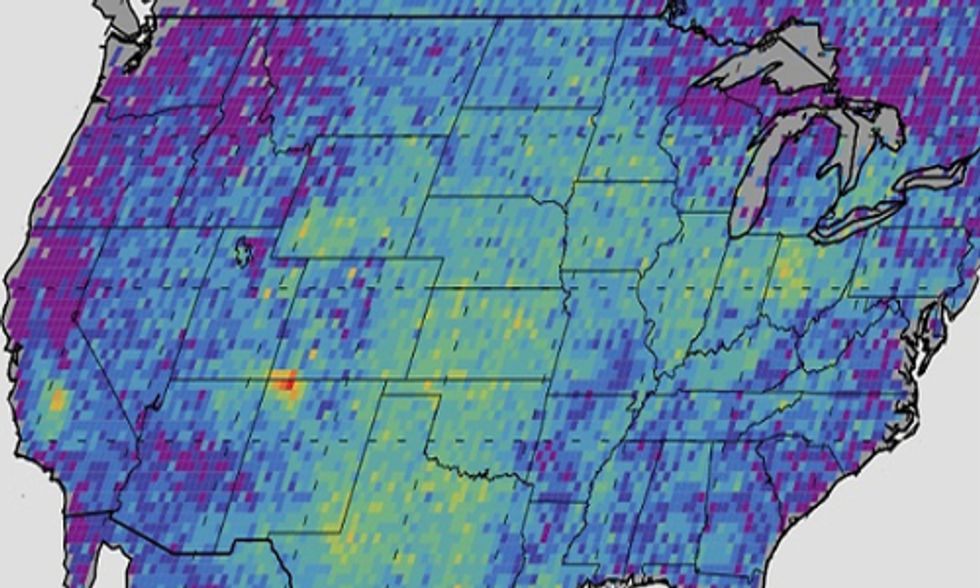 One tiny section in the U.S. is responsible for a significant amount of the country's methane emissions, according to new information released by scientists from NASA and the University of Michigan.

The Four Corners area seen in red produces the largest concentrated amount of methane emissions in the U.S. On this map, lighter colors are higher than average; darker colors are lower. Image credit: NASA/JPL-Caltech/University of Michigan

In a study published this week, they analyzed satellite-gathered data and found that an area about 2,500 square miles, near the "Four Corners" where Arizona, Colorado, New Mexico and Utah connect, produces the largest concentration of these greenhouse gas emissions ever found in the U.S., more than triple the previous estimate based on ground-gathered information. While carbon emissions are more plentiful and have attracted most of the attention as the driver of climate change, methane has been found to be an even more potent greenhouse gas.

The researchers looked at data from 2003-2009 and found that in that time, that area released 590,000 metric tons of methane into the atmosphere annually, nearly three and a half times the previous estimate for the area. That's about 10 percent of the U.S. Environmental Protection Agency's official estimate for the whole country during those years. The hot spot persisted during the entire observation period.

Fracking has been widely identified as a culprit in boosting methane emissions. But this new analysis indicates that older methods of fossil-fuel extraction are just as harmful, with methane emissions added to carbon emissions to multiple the environmental damages from fossil fuels. Fracking wasn't widely used in the area during the period studied; the boom didn't kick off there until 2009. But it is a major coal-mining center. And New Mexico's San Juan Basin is the most active coalbed methane production area in the country, a process in which methane-heavy natural gas (composed of about 95-98 percent methane) is extracted from pores and cracks in coal to use for fuel. In the process, it produces significant leaks (and well as coal mine explosions.)

"The results are indicative that emissions from established fossil fuel harvesting techniques are greater than inventoried," said the study's leader author Eric Kort of the University of Michigan. "There's been so much attention on high-volume hydraulic fracturing, but we need to consider the industry as a whole."

The Giant Methane Monster Is Lurking