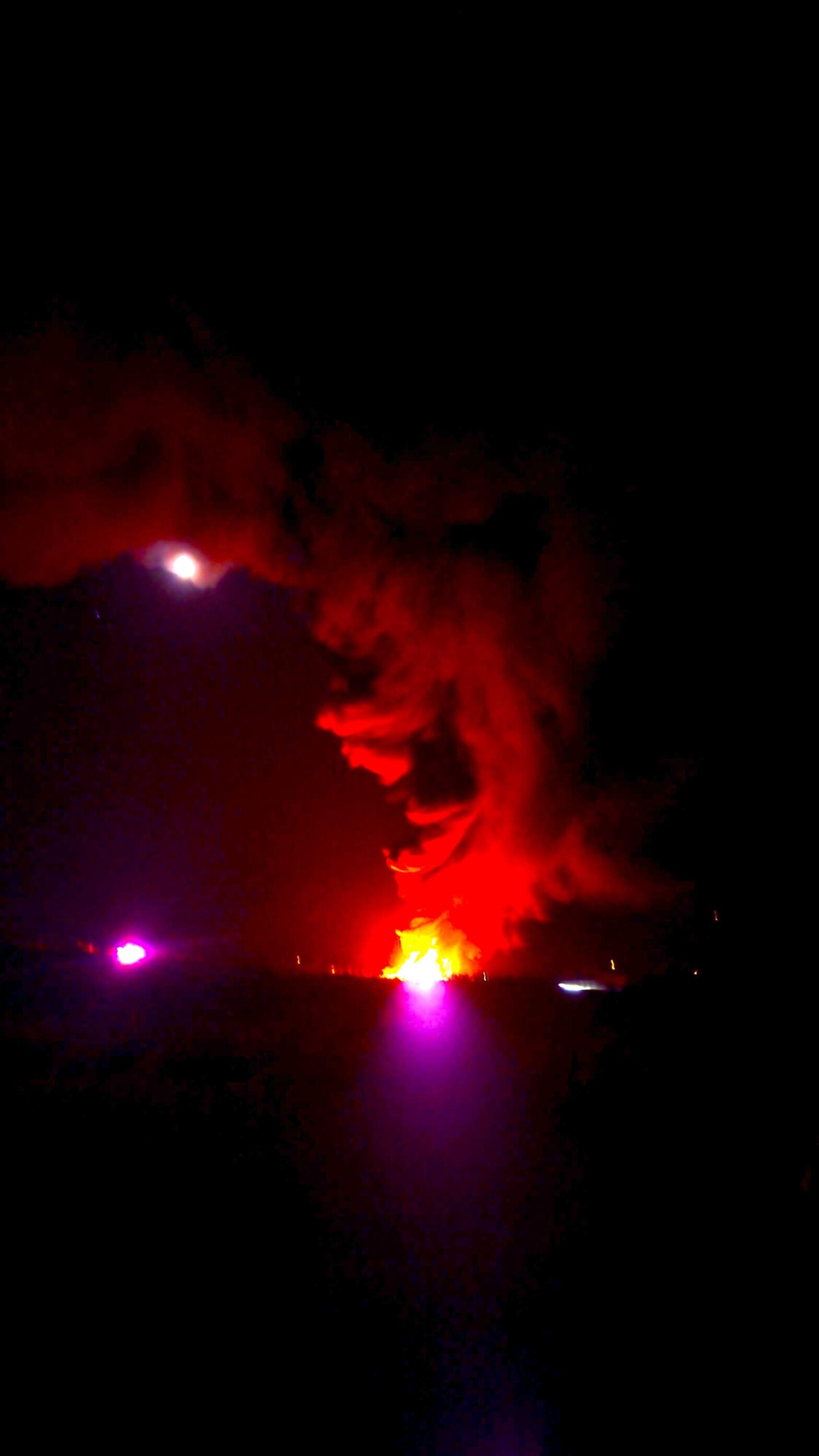 The fire broke out around 10:15 p.m. Monday at a
fracking site owned and operated by WPX Energy, setting off several explosions and temporarily closing the nearby Highway 550. Fifty-five local residents were forced out of their homes. 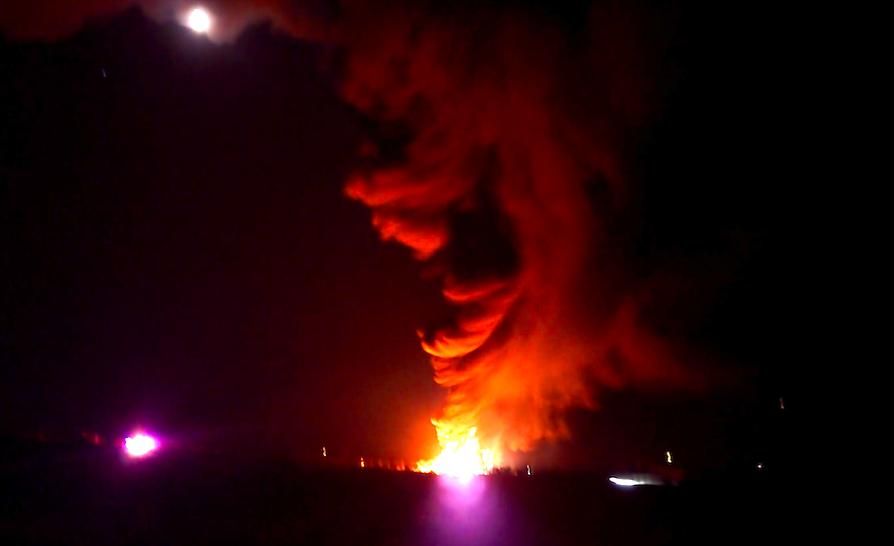 A photo of the fire before emergency response arrived on site. Kendra Pinto

The site—located in the Mancos shale deposit area and known as the 550 Corridor and a part of Greater Chaco Canyon—contains six new oil wells and 30 temporary oil storage tanks holding either oil or produced water. All 36 storage tanks caught fire and burned, the Tulsa, Oklahoma-based energy company
said.

The site was still smoldering last night and, now, “only 7 of 36 tanks at production site on fire this morning,” the company tweeted.

“The fire is being allowed to burn itself out due to the intensity of the heat, the number of oil tanks involved and to contain petroleum fluids on WPX’s five-acre site, predominantly in the storage tankage,” WPX said.

According to Albuquerque news station
KOAT, WPX stopped drilling for natural gas and oil in the area last May. The company had been producing for about a week before the fire broke out.

The cause of the fire is currently unclear. “We think that in the next couple of weeks to months, we will have that information and will be able to share that with the public,” WPX San Juan Asset Team manager, Heather Riley, told the news station.

There were no reported injuries or damage to nearby property. Most of the evacuees have returned home but 10 families are still lodged in a hotel,
The Farmington Daily Times reported.

Environmental advocates are speaking out about the explosion.

“The site that exploded is a brand new facility that consists of six wells drilled to shale formations that have never been adequately analyzed for impacts and safety concerns.” Mike Eisenfeld, the Energy and Climate Program manager at the
San Juan Citizens Alliance, told EcoWatch in an email.

WPX was given approval to develop the site from the New Mexico Oil Conservation Division in September. The U.S. Bureau of Land Management (BLM) Farmington Field Office gave final approval to drill the land in December.

“In a leap before looking scenario, the federal Bureau of Land Management in Farmington, New Mexico has allowed WPX to proceed with these shale facilities discounting the inherent danger that has now become clear with the explosion,” Eisenfeld said.

“This highlights the failure to have adequate safeguards in place to protect local communities and also raises serious questions about chemicals and toxicity associated with the explosion. Emergency response for this explosion was hours away. A thorough investigation is necessary. There should be a moratorium on these new wells until BLM completes a legally proficient Resource Management Plan Amendment/Environmental Impact Statement for the Mancos Shale/Gallup formations.”

The New Mexico environmental non-profit
WildEarth Guardians noted in a statement to EcoWatch that the BLM Farmington Field Office has leased more than 90 percent of the lands it oversees to oil and gas companies and plans to auction off additional acres for fracking during the January 2017 lease sale. The office manages a total of 1.8 million acres of public land.

“Enough is enough,” Kendra Pinto, Counselor Chapter outreach intern, said. “It seems like every month we see more wells here, and things are going to get worse if the drilling doesn’t stop. At this rate, what will be left here for our children? The land has changed.”

WPX Energy has invested millions to drill into the tight shale formations in the San Juan Basin. The company has put in at least $160 million in developing oil plays in 2014 on its 60,000 leased acres, the Santa Fe New Mexican reported.

The rise of hydraulic fracturing has aided a U.S. energy boom but the environmental impact of the technology is under intense dispute, from polluting drinking water to earthquakes. Last year, WPX Energy itself came under scrutiny for failing to disclose how it is managing its impacts on communities and the local environment with its fracking operations.

“WPX Energy scored near the bottom of the industry in a recent scorecard report published by investors benchmarking 35 companies on their disclosed efforts to mitigate key impacts, and has faced controversy in the past over allegations that it irreparably contaminated local drinking water in Pennsylvania,” the advisory firm Green Century Funds wrote.

WPX Energy has defended its operations and even helped produce a glossy 26-minute documentary, Down Deep, as a way of “spreading the message that fracking is safe and necessary for the U.S. energy future,” Tulsa World wrote of the film.

Still, as WildEarth Guardians pointed out, the recent oil field explosion in San Juan serves as a sobering reminder of the urgent need to build safe, clean renewable energy in place of fossil fuels.

“I know people want jobs,” Samuel Sage, Wildlife Guardians Counselor Chapter community services coordinator, said. “But why must they come at the expense of our air, water, and climate? Many other places are building clean energy generation and creating well-paying jobs in the process. That is our future, not this dirty industry.”

“Unfortunately, this may be the tip of the iceberg,” Rebecca Sobel, senior climate and energy campaigner at WildEarth Guardians, said. “The Obama Administration has already leased more than 10 million acres of public land to oil and gas drilling, and BLM continues to lease more land in New Mexico to fracking interests without studying these impacts. How many more explosions and evacuations will it take before we seriously consider the cost of these dirty fossil fuel industries and simply end this leasing program?”