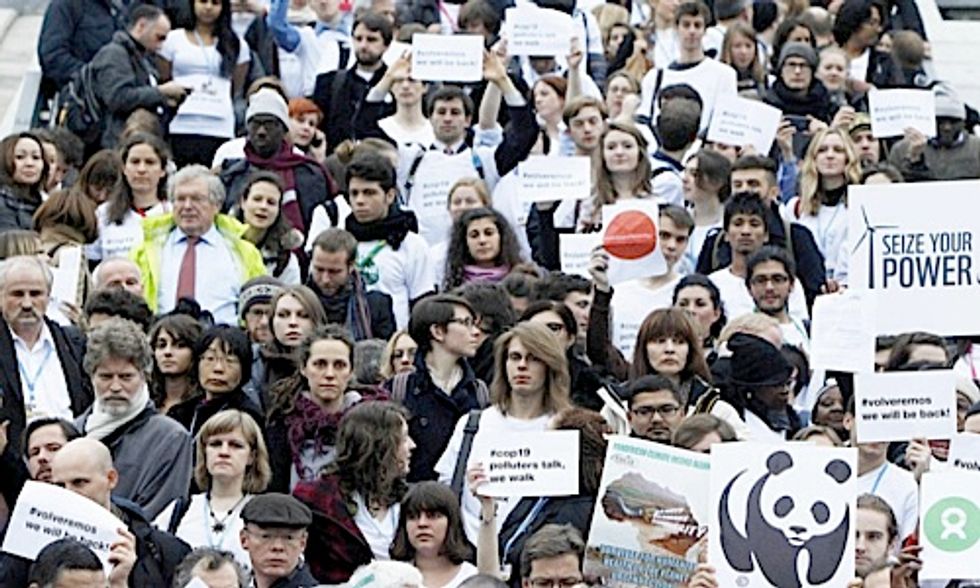 It is first time in 19 years of tortuous annual negotiations over targets and timetables for saving the Earth’s climate from overheating that the non-governmental organizations have felt sufficiently frustrated to take such a step.

Many of the 800 people involved are members of national delegations and are an important part of pushing the negotiations to a successful conclusion.

The groups concerned, some of them—like ActionAid, Oxfam and World Wildlife Fund—normally considered moderate, issued a joint statement saying that the climate talks here were set to “achieve virtually nothing.”

The actions of many rich countries here in Warsaw are directly undermining the Climate Change Convention itself, which is an important multilateral process that must succeed if we are to fix the global climate crisis.

The Warsaw Conference has put the interests of dirty energy industries over that of global citizens—with a Coal & Climate Summit being held in conjunction; corporate sponsorship from big polluters plastered all over the venue; and a presidency (Poland) that is beholden to the coal and fracking industry.

When Japan announced that it was following Canada and backtracking on emission cuts commitments previously made, and Australia gave multiple signals that it was utterly unwilling to take the UN climate process seriously, the integrity of the talks was further jeopardized.

Many individual statements from experienced campaigners underlined the lack of progress. Susann Scherbarth, for Friends of the Earth Europe, said: "We are walking out in frustration and disappointment, enough is enough.”

However, half the NGOs decided to stay in the talks and continued lobbying for progress. Several said they understood the sentiments of those outside but felt that there was still hope.

The negotiations to try to rescue something from the talks were set to continue through a second night. Delegates are trying to negotiate the skeleton of an agreement whose aim is to bind the 194 participating nations into a new deal to help prevent the climate overheating. It is due to be signed in Paris in 2015. Pledges of emission cuts and of timetables to achieve them are not expected at this summit, but some time next year.

The main sticking point at Warsaw has been the lack of funds to help developing countries adapt to climate change and repair the losses caused by sea level rise and extreme climate events. There is one day left for formal negotiations, but in fact they are expected to run into Saturday to try to reach a deal.

Any countries or delegates who might have been relieved at the loss of campaigners from the conference can expect to see them back again at the next conference in Lima, the Peruvian capital, in 2014. In the meantime the NGOs said they would concentrate on raising public awareness of the threat to the planet and would organize as many civil protests as possible.