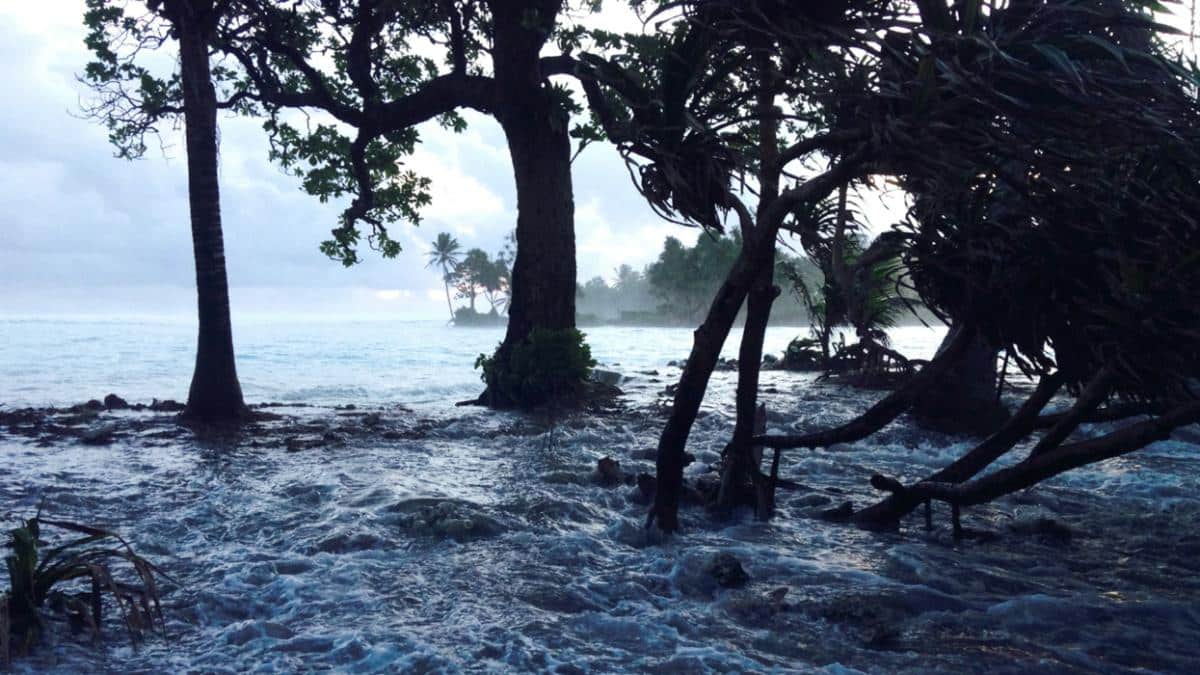 Along U.S. coastlines, from California to Florida, residents are getting increasingly accustomed to “king tides.” These extra-high tides cause flooding and wreak havoc on affected communities. As climate change raises sea levels, they are becoming more extreme.

King tides are nothing new for the Marshall Islands, a nation made up of 29 low-lying coral atolls that stretch across more than a million square miles of Pacific Ocean northeast of Australia. By 2035, the U.S. Geological Survey projects that some of the Marshall Islands will be submerged. Others will no longer have drinking water because their aquifers will be contaminated with saltwater. As a result, Marshallese would be forced to migrate away from their homelands.

This scenario is not inevitable. As part of our research on climate justice, we visited the Marshall Islands and interviewed leaders and community organizers in 2018 and 2019. We learned that large-scale adaptation measures that could save both these and other islands are still possible, and that Marshallese leaders are committed to adapting in place. But their nation’s colonial history has made it hard for them to act by leaving them dependent on foreign aid. And, to date, outside funders have been unwilling or unable to invest in projects that could save the nation.

Most of the world’s other island nations share similar colonial histories and face comparable climate challenges. Without swift and dramatic adaptation, entire island nations could become uninhabitable. For the Marshall Islands, this is expected to occur by midcentury. 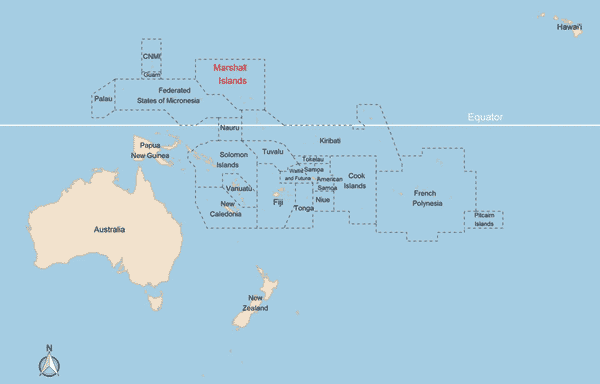 The Marshall Islands span over 1 million square miles of ocean in the North Pacific. Autumn Bordner

The Marshall Islands were settled at least 2,000 years ago and fell under colonial rule during the 19th century. The U.S. captured the islands during World War II and became colonial administrator through the United Nations, accepting “sacred trust” obligations to protect the health and welfare of the Marshallese people and promote their political and economic self-determination.

Instead, from 1946 to 1958, the United States tested 67 nuclear weapons on inhabited Bikini and Enewetak Atolls, forcing these and other exposed communities to evacuate their homelands. Thousands of Marshallese remain in exile to this day, largely on tiny islands that are extremely climate-vulnerable or in the United States. Others have returned to their atolls, where radioactive fallout still contaminates the land. All of those exposed to radiation continue to face long-term health risks. 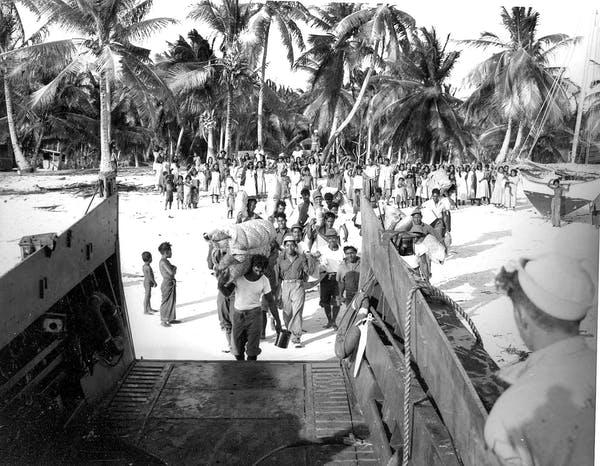 The Marshall Islands gained sovereignty in 1986. But the U.S. retains full authority and responsibility for “security and defense matters in or relating to the Marshall Islands,” including the right to use Marshallese lands and waters for military activities.

Moreover, while the islands were a U.S. trust territory, the United States did not foster a self-sufficient economy. Instead, it injected large amounts of aid under the assumption that the islands were, in the words of Pacific scholar Epeli Hau’ofa, “too small, too poor and too isolated to develop any meaningful degree of autonomy.” The bulk of this aid went toward providing social services rather than promoting economic development, resulting in an economy based almost entirely on financial transfers from the U.S.

What options does the Marshall Islands have for protecting its citizens from climate change? When we met with former National Climate Advisor Ben Graham in 2019, he told us that it will take “radical adaptation” to remain in place.

To control flooding driven by rising seas, the nation would need to reclaim and elevate land and consolidate its population in urban centers. Doing so is “not rocket science,” Graham told us. “China is building islands by the acre every day, Denmark is planning to construct nine artificial islands. … It’s not new, but it is expensive.”

Breaking: Earlier today the town of Jenrok, Majuro, Marshall Islands experienced a flooding that’s affected a number of people. Shelters have been prepared and evacuation is now in progress. The climate crisis is a lived reality here in the Pacific. pic.twitter.com/gMTcVLCAlG

According to Graham, implementing the forthcoming National Adaptation Plan will cost on the order of US billion. That’s money the country doesn’t have.

But one atoll is likely to be saved: Kwajalein, which is occupied by the U.S. military. Already, the U.S. has made substantial investments to understand how sea level rise is affecting its military assets on Kwajalein.

Like most island states, the Marshall Islands relies heavily on external funding, often from former colonial administrators. Outside aid, primarily from organizations like the World Bank and donor countries like the U.S. and Australia, accounts for more than 25% of its gross domestic product, which in 2018 was 1.3 million.

These funders exert outsized control over the development agendas of the nations they support, including the power to decide which climate change adaptations are appropriate. In particular, funders tend to impose strict social and environmental safeguards, which limit the range of adaptation options the Marshall Islands and other aid-dependent sovereigns can pursue.

To date funders have only supported small-scale short-term projects, such as flood warning systems and improvements to tidal forecasting. And many have come to view migration as a suitable alternative to the type of large-scale adaptation that would allow nations to survive and people to live and thrive in their homelands. As Ben Graham put it to us, “there are those who say … your population is too small to spend half a billion dollars on it. Just relocate. It’s not worth keeping your culture and your sovereign status.”

But international law indicates that funders should not have the power to decide whether sovereign nations can survive climate change. The international norm of self-determination requires that decision to lie with the affected nation and its people. Yet unless the status quo is changed, the Marshallese face a forced migration caused by outside powers, just as they did 74 years ago as a result of U.S. nuclear weapons testing.

The Marshallese face overwhelming challenges, but they are not passive victims. The Marshall Islands was the first nation to increase its greenhouse gas reduction pledge under the Paris Agreement. Its representatives have served as tireless advocates for climate action and human rights on the international stage. And the Marshall Islands spearheaded the successful campaign to include a “well-below 2 degrees” warming target in the Climate Accords.

But they can’t fight alone. The nation’s president, David Kabua, recently called upon wealthy nations to live up to their Paris Agreement commitments to reduce emissions and mobilize the funding that vulnerable nations need to survive.

Autumn Bordner is a Research Fellow, University of California, Berkeley.

Caroline E. Ferguson is a PhD candidate in Environment and Resources, Stanford University.