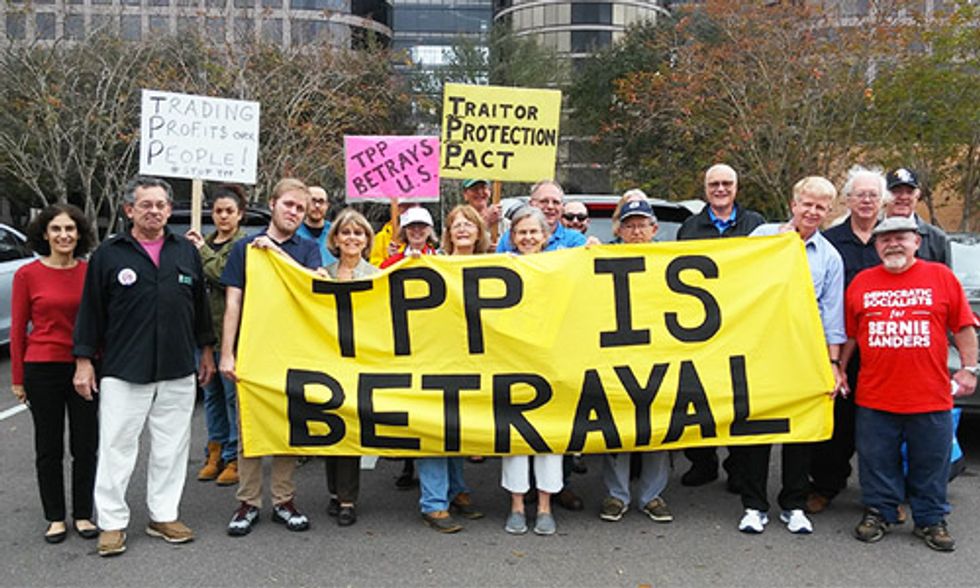 Many pundits were caught off-guard by the transpartisan fury over America's trade policy rocking the presidential primary season. But it's no surprise to me. I grew up in a working class family in Kenosha, Wisconsin. So I know why Americans have had enough of shiny promises, job-killing trade deals and Wall Street bailouts that propel ordinary people into an economic nose dive.

Hard working Americans of all political stripes recognize when the rules have been rigged against them, because they live day-to-day with the results. No doubt revolutionary change is an appealing alternative.

During the NAFTA era, my home state lost 68,000 manufacturing jobs—one out of seven in the state. Just one example: After Chrysler received billions in a 2009 bailout, it shut its Kenosha Engine facility, cut the last 800 jobs and moved operations to Mexico.

The damage extends beyond those who lose their jobs. They compete for non-offshorable service sector jobs, pushing down wages economy-wide, hurting communities coast to coast.

From Flint to El Paso and points beyond, Americans have been slammed by the trade double whammy: Firms and their well-paying jobs go away. Then just when assistance is most needed, tax bases shrivel so basic services get cut and infrastructure crumbles.

Bernie Sanders' primary victories have finally forced the mainstream media to mention the millions of middle class livelihoods destroyed by trade policies. Now it's time to face up to a second disastrous risk: These trade deals pose a direct frontal attack on a livable environment.

Pacts like the recently-signed Trans-Pacific Partnership (TPP), currently sidelined without sufficient congressional support for passage, contain thousands of pages of enforceable rules that would fuel climate chaos and empower corporate polluters to challenge environmental laws across the globe.

And if the TPP were approved, the Department of Energy would be required to automatically approve all natural gas exports to the 11 other TPP countries, eliminating our government's ability to make decisions about our energy future and incentivizing a boom in dangerous fracking. The extreme secrecy of TPP negotiations allowed the Obama administration to claim it was the greenest deal ever. But when the TPP text was finally disclosed late last year, environmental groups that the White House claimed supported it, such as NRDC and Defenders of Wildlife, joined the Sierra Club, Greenpeace, 350.org and scores of others in opposition.

Consider just one feature that sounds like the plot of a disaster movie. The TPP would empower foreign investors to drag the U.S. government to private international arbitration tribunals whenever they claim that our environmental, energy or climate policies violate expansive new TPP foreign investor privileges. Corporations can demand unlimited taxpayer compensation based on future profits ostensibly thwarted by the policy. There is no outside appeal.

If approved, the TPP would double U.S. exposure to this “investor-state dispute settlement" (ISDS) regime. Overnight 9,500 Japanese manufacturing and Australian mining giants, among other firms, could skirt our courts and laws to attack critical public interest safeguards.

It's not hypothetical. Under similar NAFTA provisions, TransCanada is now demanding $15 billion in U.S. taxpayer compensation because our government (rightly) opposed construction of the Keystone XL pipeline.

More than half of past ISDS suits have concluded with the government losing or settling. Billions have been paid to foreign companies. Already half of the new ISDS cases filed in recent years seek to enforce corporate rights to mine, extract gas and oil and generate energy no matter the consequences to us and our environment.

Expanding this system through the TPP would block worldwide environmental and social progress while empowering corporations to undermine existing climate and environmental policies.

Remarkably, the TPP not only omits the word “climate" from its text, but does not require TPP signatories to comply with their United Nations Framework Convention on Climate Change commitments. This despite all TPP countries being climate convention signatories.

The bottom line: Our failed trade policies imperil both Americans' livelihoods and the health of our planet—two reasons why the more people learn, the less they like them.

The bipartisan American trade revolt now underway demonstrates that we need to scrap these bad deals and demand real change. This is no time for half measures, bland reassurances or waiting games.

With both our economy and environment at risk, Americans can no longer remain silent. We must send a strong message to current policymakers and candidates alike that the people and the environment come first. Those who trade away our jobs, our economy and our environment to the highest bidder must be stopped.