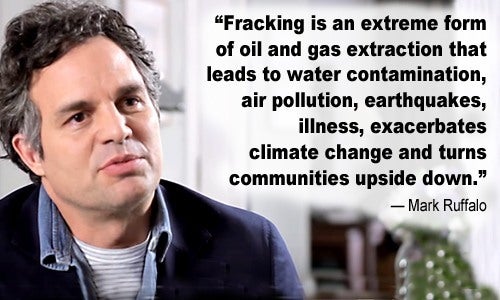 This weekend I have the pleasure and honor of coming to London for the British Academy of Film and Television Arts awards for Spotlight, a film honoring the victims of a terrible injustice and celebrating exceptional journalism that brought the story to light.

I’m also taking this opportunity to lend my voice to residents of Lancashire who are fighting to prevent another kind of injustice, drilling and fracking in their neighborhoods. Fracking is an extreme form of oil and gas extraction that leads to water contamination, air pollution, earthquakes, illness, exacerbates climate change and turns communities upside down. 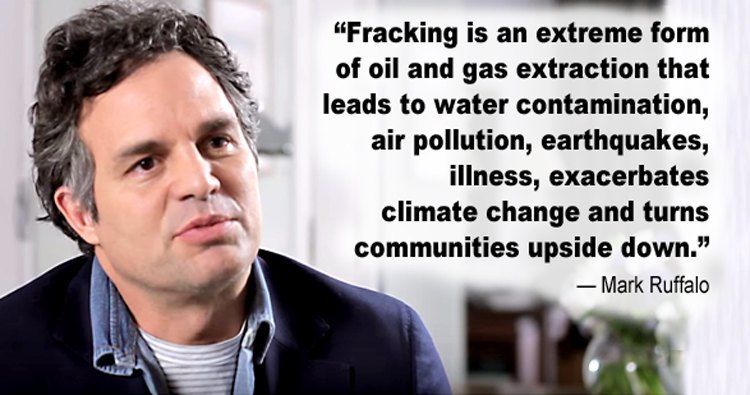 I’ve seen it firsthand in the state of Pennsylvania, where hundreds and of families have had their water turn brown and toxic. Nosebleeds are common. So are persistent rashes, trouble breathing, headaches, vomiting, hair loss and much more.

At first in 2008 and 2009 when I first visited affected residents these symptoms were anecdotal; now more than five-hundred scientific studies confirm the harms of drilling and fracking.

The United Kingdom has only tried fracking once—in Lancashire back in April 2011. That one well suffered structural failures—a common problem that leads to water contamination—and caused two earthquakes.

Lancashire County Council has since rejected two fracking applications, through long democratic processes that included many public consultations and expert testimony. As is common, the more people learn about fracking, the more they’re against it, and now the people of Lancashire decisively oppose fracking.

Unfortunately prime minister, David Cameron, supports fracking. Yet he vowed that “local people would not be cut out or ignored” and that fracking “decisions must be made by local authorities in the proper way.” In June 2015, Lancashire County did just that and decided: No fracking!

Then in November, Cameron indicated he would break his promise, announcing that the central UK government would make the final decision about whether fracking should go ahead in Lancashire. Instead of listening to local voices as promised, his ministers in London will have the final say, and will likely make a decision about Lancashire in the next month or two.

When this was announced, more than 30,000 people quickly signed Friends of the Earth’s petition calling on Cameron not to overturn Lancashire’s decision to reject fracking.

This week, I joined them, issuing a short video calling on him to respect Lancashire’s decision, and saying that supporting fracking is an enormous mistake.

The British people agree. Polls show significant opposition to fracking and once again find that the more people know about fracking, the more they are against it.

That held true in my home state of New York, where the Department of Health performed the first public health review of fracking, along with an environmental study, and concluded that fracking poses serious public health and environmental risks. New York Gov. Andrew Cuomo rightly banned fracking, and has turned the state into a national leader on clean energy solutions that will create long-term jobs and prosperity.

Today we are at the precipice of a renewable energy revolution, the cusp of a new economy that not only promises wealth and jobs but is also crucial to addressing climate change. The time for the UK to seize the clean energy future is now, not to develop dirty fossil fuels.

Along with New York and the states of Maryland and Vermont, France, Bulgaria, Germany, Netherlands, Ireland, and parts of Canada, Spain and Switzerland, Scotland and Wales have all banned or suspended fracking while the risks are examined.

The only way fracking could go forward in Lancashire now is against the wishes of the people who live there, a terrible injustice. I urge Cameron to keep his word and let their decision to reject fracking stand. And I invite you, prime minister, to join the anti-fracking majority and join us in building the renewable energy future.

This op-ed originally appeared in The Guardian.

Fighting Fracking in Brazil: Images From an Ongoing Struggle