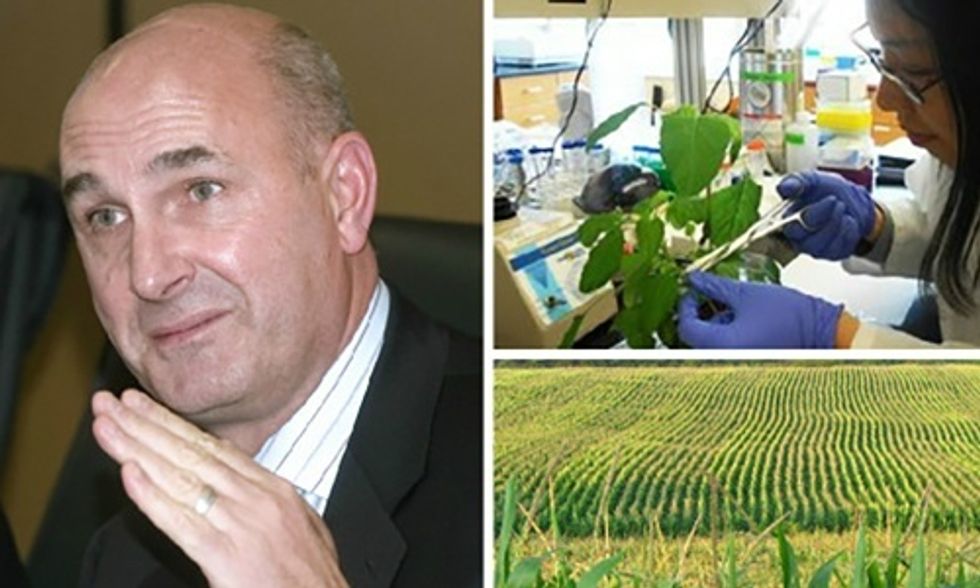 Monsanto chief is horrible ... And I got to tell him that to his face after his interview on CBS This Morning.

Approaching someone like this isn’t really my thing. But being so well behaved all the time doesn’t seem to be helping people. It made me really uncomfortable to do it. But that’s how we change. We must become uncomfortable. We must act out of our comfort zones for things to change. We must call out the people who are doing horrible things when they do them.

Hugh Grant (Monsanto CEO not the actor) must be made to feel uncomfortable for what he allows his company to do in the world. That is why I told him what I did and why I am sharing it with you.

Before a segment I was doing for the movie Spotlight with Mike Rezendes on Dec. 2, I was waiting in the green room watching Grant worm his way through the strong questions he was getting from the CBS team. His handlers clearly have been working very hard with him to give him every slippery non-answer to every question he was asked. I was beside myself watching this guy who is responsible for so much misery and sickness throughout the world slime his way through his interview. I could not hold my tongue. He came through the Green Room door ready to do high fives with his press agent and I simply told him this:

A bead of sweat broke out on his head. "Well, what I think we are doing is good," Grant replied.

When people get paid the kind of money he gets paid their thinking becomes incredibly clouded and the first thing to go is their morality.

He says Monsanto needs to do a better job with their messaging.

Want to know more about the real Monsanto and Hugh Grant? Watch this:

There is a lot more horrible stuff to look at here:

In 2003, Monsanto settled a lawsuit for $700 million with 20,000 Anniston, Alabama residents who claimed that a Monsanto plant contaminated local rivers, lakes, soil and air with polychlorinated biphenyls (PCBs). Plaintiffs reported a range of health issues including cancer, birth defects and neurological disorders.

In 2012, Monsanto settled a lawsuit with tens of thousands of plaintiffs in West Virginia for $93 million. Residents of Nitro, West Virginia claimed they had been poisoned by decades of contamination from cancer-causing chemicals used in the manufacturing of Agent Orange produced in a Monsanto plant.

The Guardian: Monsanto Settles ‘Agent Orange’ Case with US Victims

In March 2015, the International Agency for Research on Cancer (IARC), an arm of the World Health Organization, concluded in a study that glyphosate, the active ingredient in Monsanto’s widely used weedkilling product Roundup, was “probably carcinogenic to humans.”

Shortly after the IARC’s study was made public, France took steps to limit the sale of Roundup. France has also banned the cultivation of genetically modified crops.

In September 2015, two U.S. farm workers filed suit against Monsanto claiming that exposure to Roundup caused them to develop cancer.

You can find reports of Monsanto products being linked to cancer and other health issues all over the world, for example:

According to Mother Jones, nearly 100 percent of the soy crop is genetically altered and Monsanto’s Roundup is very widely used. As the use of pesticides and herbicides in Argentina has increased, cancer clusters have begun to develop around farming communities. A 2010 study at the University of Buenos Aires also found that injecting glyphosate (the active ingredient in Roundup) into chicken and frog embryos caused the same sort of spinal defects that doctors have found to be increasingly prevalent in communities where farm chemicals are used.

Mother Jones: Argentina is Using More Pesticides than Ever. And Now It Has Cancer Clusters