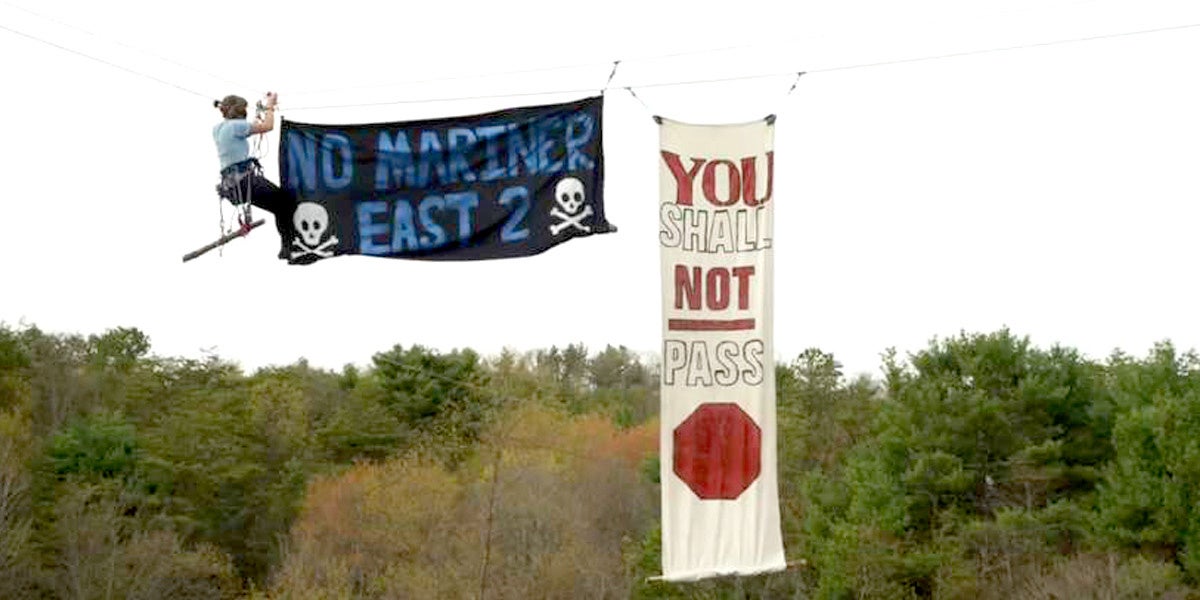 The order directs Sunoco, a subsidiary of Dakota Access Pipeline builder Energy Transfer Partners, to stop Mariner East II construction activities across Pennsylvania. The 306-mile pipeline project would carry 275,000 barrels a day of butane, propane and other liquid fossil fuels from Ohio and West Virginia to the Atlantic coast for export.

“Suspension of the permits described,” the order states, “is necessary to correct the egregious and willful violations described herein.”

Construction has been plagued by numerous spills and contaminated drinking water supplies for homes in Silver Lake Township, Pennsylvania. State regulators had discovered that Sunoco was drilling under streams without permits when a spill contaminated a high-quality creek in Berks County, Pennsylvania, the order notes—and then found unpermitted construction at over a half-dozen other locations along the pipeline’s route.

The 24-page order requires the company to provide a report that “fully explains the failures that led to the violations,” to outline the steps it will take to prevent recurrences, to address the private water wells contaminated in Silver Lake Township “to the satisfaction of the private well owners,” and to “properly abandon” illegally drilled pilot holes within 10 days, as well as a long list of other terms and conditions. The only activities allowed will be those associated with ensuring the shutdown is done safely and without further environmental damage.

“Until Sunoco can demonstrate that the permit conditions can and will be followed, the Department of Environmental Protection (DEP) has no alternative but to suspend the permits,” Pennsylvania DEP Sec. Patrick McDonnell said in a statement announcing the order.

Pipeline opponents called on the department to go further.

“What we really need is a full and permanent halt to construction and a full, transparent and public assessment of the risks associated with the Mariner East 2,” Food & Water Watch organizer Sam Rubin said in a statement. A May Food & Water Watch report called attention to the role that Mariner East II would play in efforts to convert ethane from fracked gas wells into a new glut of plastics, citing the health hazards for workers and communities near petrochemical manufacturing, as well as the growing plastics gyres in the Pacific Ocean.

More directly, Sunoco has a checkered record nationwide when it comes to hazardous materials pipeline spills. Resolutions passed by eight local governments along Mariner East II’s route observe that over the past decade, Sunoco Logistics has spilled hazardous materials 296 times—more often than any other operator—according to federal pipeline safety regulators.

Energy Transfer Partners, parent company of Sunoco Pipeline, said that it did not plan to abandon construction efforts.

“We received an order this morning from the Pennsylvania Department of Environmental Protection that instructed us to suspend construction activities in Pennsylvania with respect to Mariner East 2 until reauthorized by the Pennsylvania DEP,” Energy Transfer Partners spokesman Jeff Shields said in a statement. “The order requires us to submit various reports related to current and future construction activities. We intend to expeditiously submit these reports and we are confident that we will be reauthorized to commence work on this project promptly.”

Still, there are signs that investors are growing frustrated with delays. The project’s permits originally anticipated that construction would be done by 2016. This fall, Energy Transfer Partners CEO Kelcy Warren told investors during an earnings call that it might try to bring in a joint venture partner to help carry the costs. “We are open-minded,” Warren said. “If a partner was bringing liquids, bringing value to the project, we would consider that.”

Pipeline opponents say that the risks won’t end after construction is over, citing safety concerns associated with the liquid fuels Mariner East II will carry very close to schools, senior homes and businesses through the densely populated suburbs of Philadelphia. An analysis by FracTracker found that over 100,000 people live within a quarter mile of Mariner East II’s proposed path. A worst-case scenario explosion could bring a fireball with an even larger radius, a study by commissioned by a local safety coalition found last year, prompting one school to start conducting safety drills.

That’s in addition to the environmental concerns associated with the problem-plagued construction.

“In my district alone, pipeline construction has contaminated almost two dozen wells, disrupted businesses, created significant environmental damage and resulted in the development of an expanding sinkhole that currently threatens at least two private homes and is within 100 feet of Amtrak’s Keystone Line,” State Sen. Andy Dinniman wrote on Dec. 18 to Pennsylvania Gov. Tom Wolf. “I should point out that all of these incidents have occurred in a single Chester County municipality [near Philadelphia] as a result of pipeline construction.”

“[The] announcement is a small step in the right direction, but the responsible course of action for Gov. Wolf is to stop Mariner East construction until and unless a public safety risk assessment is available,” Caroline Hughes, a representative from Goshen United for Public Safety said. “Del-Chesco United intends to use this temporary halt to continue to call for the Mariner East risk assessment which Gov. Wolf should have undertaken from the beginning.”

Other grassroots activists have staged tree sits and other protests to halt Mariner East II’s construction at a Camp White Pine in Huntington County. Elise Gerhart and her mother Ellen, a retired public school teacher, have said the company attempted to illegally cut trees on their land to clear the pipeline’s path.

“I’m very skeptical that the governor’s office is taking people’s concerns seriously,” Elise told NPR’s State Impact after Wednesday’s order. “I really believe that the governor wants to push this project through.”

Given the company’s record, she questioned whether Sunoco would adequately follow the DEP order’s new requirements. “We have to go out there and see what they’re doing and report it,” she said.