‘Whales, Sea Turtles and Other Animals Shouldn’t Have to Suffer and Die From Entanglements’: Conservation Group Seeks Federal Help 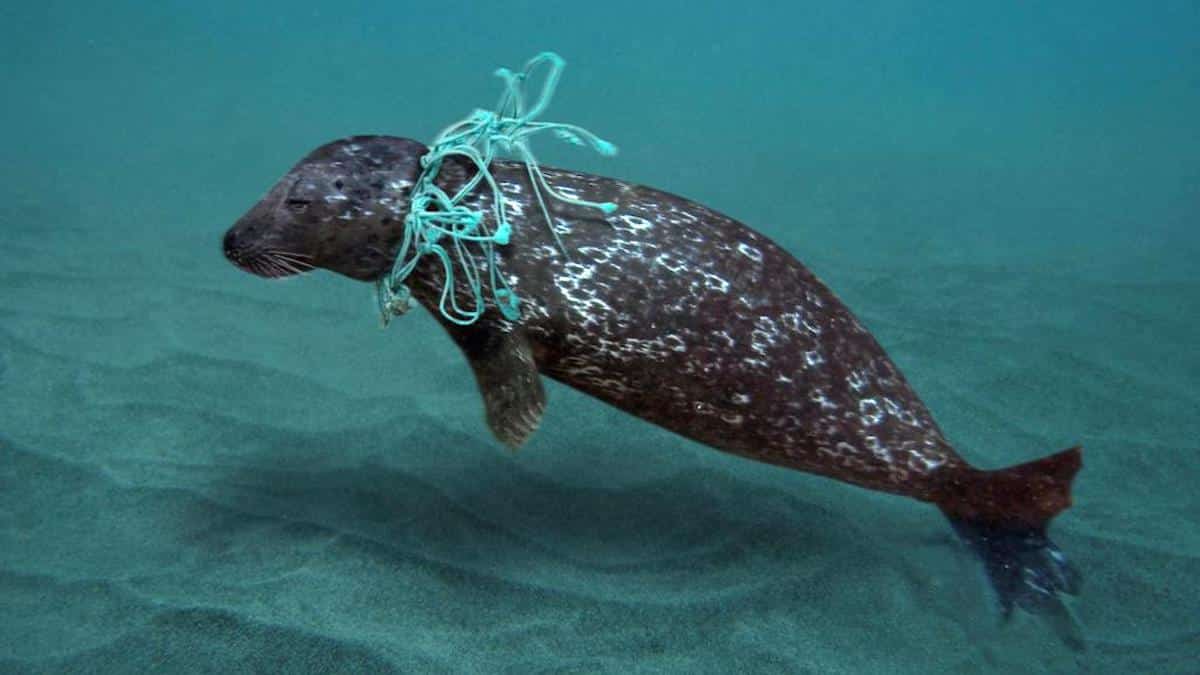 A harbor seal entangled in a fishing net. NDLA

Oakland conservation group the Center for Biological Diversity has petitioned the National Marine Fisheries Service to require trap fisheries to convert from traditional crab fishing gear to new ropeless or “pop-up” gear in all United States waters within the next five years.

The old gear has led to many entanglements and injuries of endangered whales and sea turtles.

“In 2018 alone more than 100 large whales — including critically endangered North Atlantic right whales and Pacific humpback whales — were reported entangled in fishing gear in the United States. This is likely only a fraction of the actual number of animals of all kinds seriously injured or die in fishing gear, since most entanglements go unobserved,” said the Center for Biological Diversity in a press release.

Most entanglements of marine animals occur because of traps that use ropes that run from a buoy on the water’s surface to traps on the ocean floor. “Pop-up traps use lift bags or buoys on coiled ropes triggered by remote or time-release sensors to float the traps to the surface, eliminating those static vertical lines,” the press release said.

“[O]ther versions use metal gadgets that dissolve in water over time and allow the line to bob to the surface,” reported Tara Duggan of the San Francisco Chronicle.

As ocean conditions have been affected by climate change, entanglements of marine life have increased “in nearly all regions,” according to the press release. “Warming waters, for example, can shift the distribution of prey, forcing whales to look for food in areas that increase the overlap between the animals and fishing gear.”

State and federal agencies have been sued by the Center for Biological Diversity for allowing entanglements of endangered whales and sea turtles, which violates the Endangered Species Act.

“Crab and lobster fishers are still using 19th century technologies despite new alternatives that could eliminate entanglements in buoy lines. But change isn’t going to happen on its own, so our petition seeks a deadline to convert to ropeless gear,” commented oceans legal director at the Center for Biological Diversity, Kristen Monsell, in the press release.

The federal petition is directed at the Dungeness crab fishery in California, the lobster fishery in New England and the Gulf of Mexico’s stone crab fishery, among others. If accepted, the petition would take “a few years” to be put into effect, the San Francisco Chronicle reported. If it’s rejected, the decision could be challenged in court.

Director of the Woods Hole Oceanographic Institution Marine Mammal Center Michael Moore said “the three- to five-year timeline was ‘reasonable and doable,’” reported Doug Fraser of the Cape Cod Times. “He hoped it would give a sense of urgency to the National Marine Fisheries Service, which he said has worked steadily to advance and test the technology.”

Fishing groups feel that pop-up gear is “too expensive and not yet ready for commercial use for Dungeness crab,” Duggan of the San Francisco Chronicle reported.

The petition contends that legally requiring the use of ropeless gear would encourage technological advancements and investments that would lower the cost.

“What hasn’t happened is the investment of time, money and knowledge from the federal government to make (widespread deployment) happen,” Moore said, as reported by the Cape Cod Times. “They are really on board, but there needs to be a quantum leap from traps in the water to full-blown industrial scale deployment with a regulated and standardized system.”

“Whales, sea turtles and other animals shouldn’t have to suffer and die from entanglements,” said Monsell in the press release. “Not when there’s a technological fix. Ropeless fishing gear promises to help whales and fisheries by making a more productive ocean.”